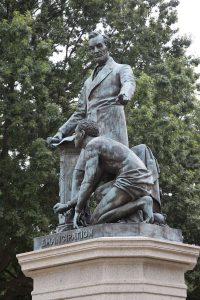 This is a guest post by Lavonda Kay Broadnax, digital reference specialist in the Library’s Researcher and Reference Services Division.

The Freedmen’s Monument. From the George F. Landegger Collection of District of Columbia Photographs in Carol M. Highsmith’s America.

Abraham Lincoln was fond of poetry: He wrote poems, read them, received them and was the subject of many. So states “Abraham Lincoln and Poetry,” a unique example of the numerous guides the Library makes available to help researchers find materials associated with Lincoln in its diverse collections. The guide includes a commissioned poem by H. Cordelia Ray, “Lincoln: Written for the Occasion of the Unveiling of the Freedmen’s Monument in Memory of Abraham Lincoln.” It was read on April 14, 1876, by the noted African-American orator William E. Matthews at a ceremony in the Washington, D.C., park, where the Freedmen’s Monument, shown at right, resides. It opens:

To-day, O martyred chief, beneath the sun
We would unveil thy form; to thee who won
Th’ applause of nations for thy soul sincere,
A loving tribute we would offer here.
‘T was thine not worlds to conquer, but men’s hearts;
To change to balm the sting of slavery’s darts;
In lowly charity thy joy to find,
And open “gates of mercy on mankind.”
And so they come, the freed, with grateful gift,
From whose sad path the shadows thou didst lift.

Ray was an accomplished African-American poet, a successful school teacher and a committed activist. She was born free around 1852 to free parents. Her father, Charles Ray, initially a blacksmith, served as a Congregational minister after receiving training at the Wesleyan Academy in Wilbraham, Massachusetts. He was also an editor and owner of the abolitionist newspaper “Colored American.” The family’s home was a station on the Underground Railroad.

At a time when doing so was uncommon, Ray’s parents provided intellectual opportunities for their daughters as well as their sons. Ray graduated from the University of the City of New York (now New York University) with a master’s degree in pedagogy; she was one of only three African-American graduates in her class. She also studied French, Greek, Latin and German at the Sauveneur School of Languages and earned a teaching certificate. She used her teaching skills at regional and national conferences for African-American teachers, and she was active in community building, being especially noted for raising funds to assist the New York Colored Orphan Asylum.

Ray’s poems appeared regularly in African-American publications such as the “AME Review” and “The Woman’s Era.” Eventually, she published a collection of her poetry, “Sonnets,” which received a flurry of reviews and high praise. She also received commendations from two of her contemporaries who were prominent African-American women writers: Gertrude Bustill Mossell (in “The Work of the Afro-American Woman”) and Hallie Q. Brown (in “Homespun Heroines”).

Ray’s poem for Lincoln was read on the 11th anniversary of Lincoln’s assassination, after President Ulysses S. Grant unveiled the Freedmen’s Monument. A plaque on it reads:

This monument was erected … [w]ith funds contributed solely by emancipated citizens of the United States. … The first contribution of five dollars was made by Charlotte Scott. A freedwoman of Virginia being her first earnings in freedom and consecrated by her suggestion and request on the day she heard of President Lincoln’s death to build a monument to his memory.

Soldiers who had demonstrated their capabilities and valor during the Civil War in the United States Colored Troops also contributed generously to the monument. They were very disappointed, not to mention shocked, when they saw the monument’s depiction of the freedman: He was portrayed as a man kneeling beside Abraham Lincoln and dressed only in a loin cloth. Author and scholar Kirk Savage addressed this controversial and racist depiction at the 2018 National Book Festival.

Even with the controversy, the dedication of the monument was festive. The National Park Service reported that over 25,000 people attended, including President Grant, his cabinet and members of Congress.

But Ray was most well known for her Lincoln ode. Various newspapers reprinted or excerpted it, facilitating its popularity. Numerous pamphlets were also printed to provide a full account of the commemoration day’s proceedings. Despite being acclaimed during her lifetime, however, Ray’s work regrettably fell into obscurity.

As we celebrate President’s Day this month and honor the contributions of African-Americans to our culture and history, perhaps we can also once again unveil and remember one of H. Cordelia Ray’s most popular poems, written as a tribute to President Abraham Lincoln.