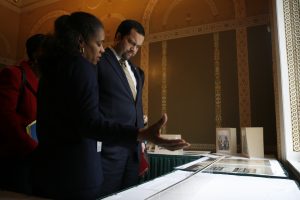 In this post, historians from the Library and the Smithsonian’s National Museum of African American History and Culture highlight how collection items shed light on the black experience. The post is reprinted from the January–February issue of LCM, the Library of Congress Magazine. The entire issue is available online.

Adrienne Cannon is the Afro-American history and culture specialist for the Library’s Manuscript Division. Paul Gardullo is a curator at the Smithsonian’s National Museum of African American History and Culture and director of the museum’s new Center for the Study of Global Slavery. Here they discuss the importance of select items they curate.

Please tell us about an artifact you secured, or a manuscript collection you interpret.

Cannon: The Library’s African-American collections span the colonial period to the present and are particularly strong for the study of the 20th-century civil rights movement. The NAACP records are the cornerstone of the Library’s civil rights collections—they are the largest single collection ever acquired by the Library.

The Library has served as the official repository for the records since 1964; they now consist of approximately 5 million items. The Library’s civil rights collections also include the original records of the National Urban League, the NAACP Legal Defense and Educational Fund, the Brotherhood of Sleeping Car Porters and the Leadership Conference on Civil Rights. These records are enhanced by the personal papers of such prominent activists as Thurgood Marshall, Roy Wilkins, Arthur Spingarn, Robert L. Carter, Mary Church Terrell, A. Philip Randolph, Bayard Rustin, James Forman, Joseph Rauh, Edward W. Brooke, Patricia Roberts Harris, Rosa Parks and Jackie Robinson.

Gardullo: Between 2010 and 2015, I led the effort to collect two key structures from the Louisiana State Penitentiary at Angola: a guard tower built some time in the 1930s or 1940s and a jail cell. Through these objects, we ask visitors to grapple with the power and depth of a particular place and its connection to the legacy of slavery in America.

The largest and perhaps most notorious American plantation prison, Angola was born in slavery—it sits on the site of a former slave plantation. It became a state penitentiary in the late 19th century and remains a working plantation to this day. More than 6,000 people, the great majority African-Americans serving life sentences, are incarcerated there. 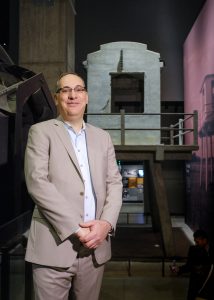 Paul Gardullo with a guard tower from the Louisiana penitentiary, now in the National Museum of African American History and Culture. Photo by Shawn Miller.

What are the challenges of acquiring such materials?

Cannon: Growing interest in African-American history and culture is making acquiring collections like the NAACP records more competitive. The Library acquired the NAACP records with the help of Morris L. Ernst, a friend of Arthur Spingarn, the NAACP’s longtime counsel and president. Since the establishment of the U.S. Copyright Office in the Library in 1870, a large percentage of materials have been collected as copyright deposits, while others—like the NAACP Records—have been acquired as gifts or through purchase and transfer.

Gardullo: The museum began without a collection, so we had to bring in artifacts from across the country and around the world. What started out as a weakness, we transformed into our greatest strength, as it allowed us to reach out and forge deep connections with individuals, families and communities. We are truly a people’s museum; when you walk through the museum, you can sense people’s feeling of ownership—of the materials on display, but also of the history.

To have that sense of ownership is an amazing thing when you are talking about the portrayal of African-American history and culture on the National Mall, a history that has been suppressed or disregarded far too long and far too often by our national institutions. We see our job as filling the silences in American history.

Why is it important to preserve these materials?

Cannon: Collections like the NAACP records document the long, ongoing struggle for civil rights. They inform our understanding of the present and can inspire us to create a better future.

Gardullo: In a country with the world’s highest incarceration rate, where African-Americans are imprisoned at six times the rate of white Americans, the persistence of Angola as a place that both changes and yet stays the same is a powerful testament to the continuum between slavery and incarceration. Its presence in the museum does not provide answers, but provokes questions about slavery and its legacies; about crime and punishment; about compassion, empathy and redemption; and about the power of race in America.

How have visitors or researchers responded to the materials?

Cannon: Annually, the NAACP Records are the most heavily used collection in the Library. They chronicle the NAACP’s fight to break down the barrier of the color line, which encompassed every aspect of American society and extended beyond America’s shores, particularly to Africa and the Caribbean.

They cover politics, the justice system, business, employment, education, family, housing, health care, transportation, the armed forces, sports, recreation, religion and the arts. They also contain information about major figures, events and organizations. The comprehensive scope of the collection accounts for its popularity. Materials in the Library’s recent exhibition commemorating the Civil Rights Act of 1964 were drawn primarily from the NAACP Records. Nearly 780,000 visitors toured the physical exhibition, and the online version continues to attract thousands more.

Gardullo: By documenting and humanizing the incarcerated, we ultimately hope to depict Angola as a complex and important world for us to pay attention to. Some visitors may be surprised to learn about it, but most become absorbed by the depth and truthfulness of the fuller story. People want to feel connected to others and to history, and they appreciate a space where they can reflect, explore, learn and talk about incarceration, race and humanity.