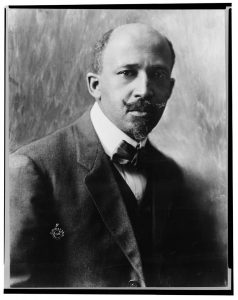 This is a guest post by Ryan Reft, a historian in the Manuscript Division. It coincides with the centenary this month of the first Pan-African Congress.

The problem of the 20th century is the problem of the color line, author and civil rights pioneer W.E.B. DuBois famously wrote in “To the Nations of the World,” the culminating address of the first Pan-African Conference, held in 1900 in London. Issued by the gathering of prominent black leaders from America, the West Indies and Africa, the address served as a cautionary yet aspirational statement: racism was a problem, but one the 30 delegates hoped to remedy as a new century dawned.

The conference was a first step toward not only uniting the black global diaspora, but also establishing a black internationalism that would come into its own in the years after World War II. The burgeoning political movement played a critical role in dismantling European colonialism in Africa and Asia.

In Feb. 1919, nearly two decades after the 1900 conference, the first Pan-African Congress took place, and once again DuBois was at the center of its proceedings. It was held adjacent to the Paris Peace Conference, the meeting convened to create a lasting peace following the Great War. The Pan-African Congress attempted to secure a place for peoples of African descent within the new world order.

The Library of Congress’ online exhibition, Echoes of the Great War: American Experiences of World War I, provides insights into the 1919 congress, which in many ways served as a model for future congresses, as a forum for uniting the global black diaspora and as a means for setting a course for black internationalism. 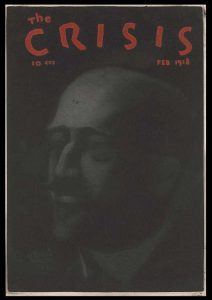 A portrait of DuBois by the artist Frank Walts appeared on the cover of the Feb. 1918 issue of The Crisis, the NAACP’s publication.

DuBois traveled to France in Dec. 1918 as a representative of the NAACP, confident that the Paris Peace Conference provided the ideal setting for a parallel gathering of black dignitaries from around the world to discuss the international problem of racism. “Every attempt must be made to present the case of the Darker Races of the world to the enlightened public of Europe,” DuBois wrote to the NAACP’s board.

With the help of French parliamentarian and Senegalese native, Blaise Diagne, DuBois hastily arranged the congress. Unfortunately, few African representatives could attend because colonial governments refused to allow them passage to Paris; numerous African-Americans similarly failed to make the trek since the U.S. government blocked their attempts to reach the French capital.

Undaunted, DuBois, Diagne and 55 other participants from 15 nations gathered in Paris over three days in February. The largest cohort included African-Americans such as DuBois and activists Rayford Logan and Addie Waites Hunton.

The debates that unfolded were far from revolutionary and in many ways reflected both the diffuse nature of black internationalism and the Western biases of Diagne and Dubois. As a member of the French parliament and a beneficiary of colonialism, Diagne carefully avoided critiquing imperial France in any meaningful way. Educated in America and Germany, DuBois had absorbed Western thought in regard to Africa, and he never really pushed for the full autonomy of African colonies. Instead, he believed they needed Western guidance to bring them to political maturity. The system that emerged from the Paris Peace Conference reflected much the same view in that it failed to grant full autonomy to several former colonial states.

Some delegates to the Pan-African Congress were, however, more militant. They included delegates from the West Indies and others such as John Archer, leader of the newly created African Political Union and the first person of African descent elected to the English parliament. In a Nov. 1918 speech, Archer conveyed his general thoughts on African self-governance, reflecting the anti-imperial attitude he brought to the conference: “I am not asking,” he said. “I am demanding.” 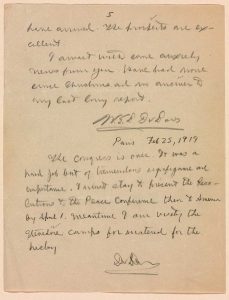 “The Congress is over. It was a hard job but of tremendous significance and importance,” wrote DuBois in a postscript to a report he submitted to the NAACP about the 1919 congress.

Whatever its flaws, the Pan-African Congress began the critical process of defining and implementing black internationalism. Three more congresses would take place in the 1920s, followed in 1945 by a Pan-African Congress held in Manchester, England. In attendance were African independence leaders Kwame Nkrumah, later prime minister and president of Ghana, and Jomo Kenyatta, later prime minister and president of Kenya, as well as the West Indian Marxist George Padmore. With a tide of independence movements gaining speed, the delegates called for an end to imperialism and for full independence. DuBois contributed to the gathering, but more as a respected figurehead rather than a driving force.

In the aftermath of World War II, during the 1950s and 1960s, much of Africa and Asia emerged newly independent. Given the agency of colonized peoples and the weakness of postwar Europe, imperialism no longer proved feasible. African-Americans, too, asserted their independence through the civil rights movement, with the Southern Christian Leadership Conference, the NAACP, the Student Non-Violent Coordinating Committee, the Congress on Racial Equality and others demanding racial equality.

The 1919 Pan-African Congress was a precursor to such international developments. Together with the experience of having chafed mightily under discriminatory policies of the segregated U.S. military during World War I, the congress instilled in African-Americans “a racial consciousness and racial strength that could not have been gained in a half century of normal living in America,” Addie Waites Hunton noted. The color line would continue to bedevil the West, and particularly the United States, but the stakes had been raised and the fight engaged. The results are still unfolding.