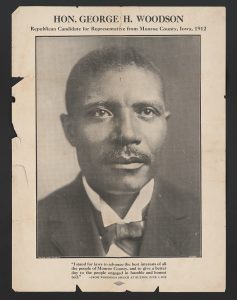 This is a guest post by Beverly W. Brannan, curator of photography in the Prints and Photographs Division.

George Henry Woodson in 1912, as a candidate running to represent Iowa’s Monroe County in the state legislature.

When the Prints and Photographs Division acquired the collection of Howard University law professor William Henry Richards in 2013, a 1912 campaign flyer included in the collection aroused my curiosity. It promoted the candidacy of George Henry Woodson for the Iowa House of Representatives. How did he fit into the politics of the times, I wondered?

I discovered extensive biographical and contextual information in the Library’s holdings and subscription databases, some of which I’m pleased to share with you here in honor of African-American History Month.

African-Americans born shortly after the Civil War faced the immediate challenge of supporting themselves when there were almost no institutions to help them begin. Yet George Woodson—Buffalo soldier, Howard University lawyer and Iowa Republican—rose to the challenge and, in doing so, championed some of the goals of the modern civil rights movement.

Woodson’s parents, George Woodson and Sena Sawyer, were enslaved in Wytheville, Va., where George was born in 1865. He attended the Wytheville Freedmen’s School, opened in 1867.

In 1883, at 18, he enlisted in the military in Louisville, Ky. He joined Company I, 25th Infantry, as a “Buffalo soldier,” a term referring to African-Americans who served from 1866 until 1951, when the military became racially integrated. 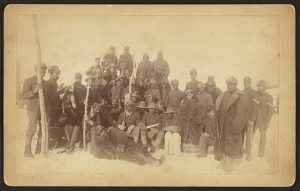 In 1890, Woodson received a B.A. from Virginia Normal and Collegiate Institute (now Virginia State University); in 1895, he earned a law degree from Howard University. Woodson then opened a law office in Iowa, where the Consolidated Coal Company employed many African-Americans. In 1898, he ran unsuccessfully for county attorney but went on to become a leader in the Iowa Republican Party.

With others, he founded the Iowa Afro-American Council, opened a law partnership that would last 20 years and helped organize the Iowa Negro Bar Association. Woodson operated on national scale. He attended meetings throughout the country and delivered talks that received favorable coverage in both the general and the black press. In 1905, he was one of the 29 founders of the Niagara Movement, advocating full civil rights for African-Americans.

In 1912, Woodson ran for the Iowa State House as a Republican candidate but again was unsuccessful. A contemporary African-American Iowan, Reuben Gaines, Jr., commented in his memoir, “It was too early to elect a black man to that position.”

The newspaper The Chicago Defender, in articles from 1918, offered insight into inequitable practices of the time. When Woodson was passing through Waterloo, Ia., he was refused restaurant service because of his race even though there were no black-owned restaurants in the town. When he asked a policeman to arrest the restaurant owner, the police refused. The white newspaper in Waterloo condemned the restaurant owner, citing Woodson’s peaceful behavior and his honorable military service record.

In 1921, as demand for coal declined, Woodson moved to Des Moines as deputy collector of customs and married Mary Montague, in her mid-50s and marrying for the first time, like Woodson.

In 1924, at the request of President Calvin Coolidge, Woodson led a commission to the Virgin Islands, which the U.S. had acquired in 1916. The commission studied unemployment and poverty, and elements of its report were incorporated into the 1924 Republican presidential platform.

In 1925, Woodson was a founder of the National Bar Association (NBA) in Des Moines and served as its first president. Harvard graduate Charles Hamilton Houston, future dean of Howard University Law School, numbered among its 120 lawyers. The NBA gave voice to black attorneys who were excluded from every nationally organized bar association at that time.

Woodson continued attending bar association meetings and worked at the customs office until 10 days before he died on July 7, 1933. Several of his outgoing letters are included in the papers of W.E.B. Dubois at the University of Massachusetts, Amherst.

The first generation of African-Americans born after slavery lived through the nadir of race relations in the United States. One of Woodson’s most important accomplishments was to help create an intellectual community for people to achieve full citizenship. Woodson is not a household name today. But through his example as a student, citizen and founder of participatory organizations, he helped make it possible for people like Thurgood Marshall and Rosa Parks to rise to international prominence.

On a drugstore bag found in the collection of Rosa Parks at the Library of Congress, Parks, who died in 2005, wrote over and over the phrase “the struggle continues.” Although her struggle lasted a lifetime, she continued the work that others, including George Woodson, had begun before her.