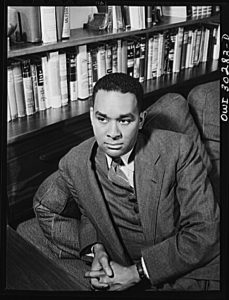 This post is republished from the January–February issue of LCM, the Library of Congress Magazine. The entire issue is available online.

In his classic novel “Native Son,” Richard Wright tells the story of a poverty-stricken young black man who takes a job as a chauffeur to a white family in Chicago, accidentally kills the daughter and tries to cover it up.

For decades, the film version of “Native Son” didn’t tell the whole story — the result of censorship before its U.S. release. Only in recent years has the original version been available, thanks to a restoration done by the Library of Congress.

The film was shot in Argentina by French director Pierre Chenal from a screenplay written by Wright, who also (and unusually) starred as the lead character, Bigger Thomas.

“Native Son” premiered in Argentina in 1951 but was heavily censored for its U.S. release. Censors cut, among other things, comments about white “race hatred,” shortened sequences depicting Thomas’ consultations with lawyers and his murder trial and removed scenes showing a white lynch mob and police violence.

Those cuts resulted in another loss: the near-disappearance of the original version.

For some six decades, the censored version of “Native Son” was the only one available — until the Library restored the original film to its original 107 minutes using a 16mm Argentine print and an international version discovered in an abandoned nitrate film vault in Puerto Rico.

The Library documents the original film in another way, too. Its Copyright Deposit Descriptions collection — material acquired through copyright submissions — holds the “dialogue continuity,” a transcription of the final version of the film complete with corrections, amendations and passages struck by censors. In one scene, censors cut a scene in which Thomas kills a footlong rat in the family apartment, softening the depiction of brutal living conditions. In another, censors delete a discussion about smashing the Jim Crow system.

In the Library’s collections, however, Wright’s original vision lives on, both on film and paper, for future audiences. Scroll down to view a portion of the dialogue continuity acquired by the Library through copyright deposit. A larger version is available in the printed LCM. 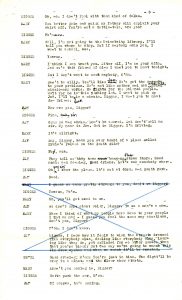 This transcribed page from the final version of “Native Son” shows cuts marked for the film’s U.S. release.