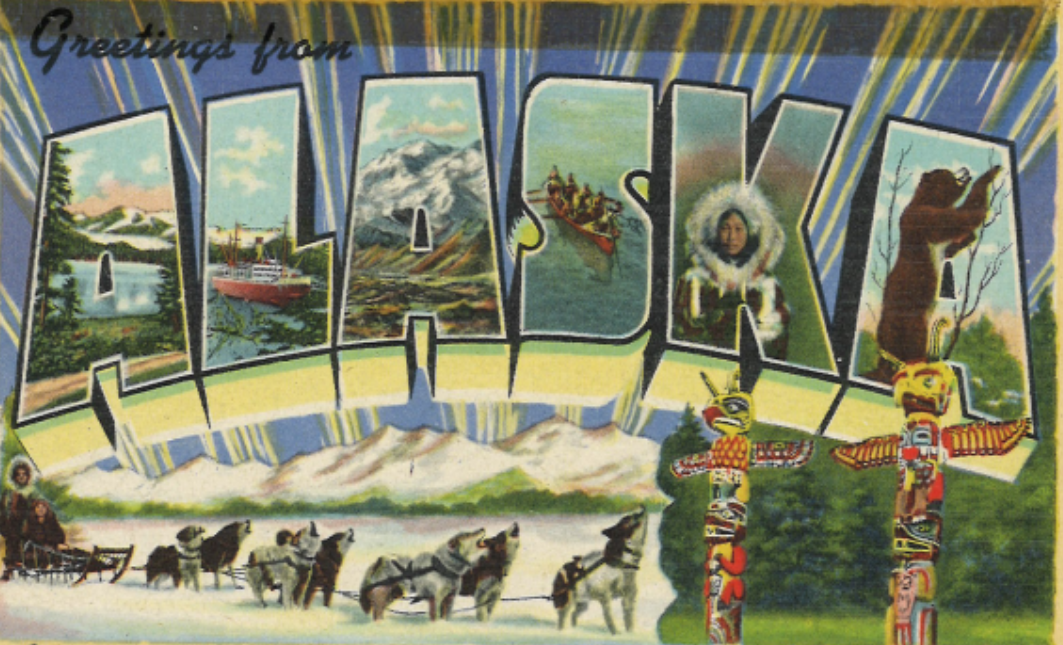 This is a guest post by Joshua Levy, a historian in the Manuscript Division.

In 1960, John Steinbeck set out on a months-long road trip to reacquaint himself with his country. He returned not with clear answers but with his head a “barrel of worms.” The America he saw was too intertwined with how he felt in the moment, and with his own Americanness, to permit an objective account of the journey. “External reality,” he wrote, “has a way of being not so external after all.”

Pandemics aren’t the only reason Americans have found sanctuary in our homes, or the only anxious times we’ve itched to escape them. The American road trip was first popularized during the auto camping craze of the 1920s, with its devotion to freedom and communing with nature, but it was democratized after World War II. The golden age of the American family vacation came during the very height of the Cold War. It was a time when, according to historian Susan Rugh, the family car became a “home on the road… a cocoon of domestic space” in which families could feel safe to explore their country.

The trips 2oth-century Americans took, to national parks and resorts and historic sites, generated a wealth of travelogues and other sources that often communicate far more about the traveler than the road taken. They can help us understand our own moment as well. Earlier this year, just 29 percent of Americans felt comfortable taking a commercial flight, but 84 percent were comfortable using their own vehicles for a road trip. During the pandemic, tourism suffered but road trips surged. Driving into the great outdoors again felt like a safe escape.

The Manuscript Division is full of road trip stories, not because it maintains specific road trip collections but because automobile travel has been so central to modern American life. Items in the division range from administrative records mapping out early guidebooks, to breathless journals recounting shared adventures, to testimonials of discrimination faced at roadside gas stations, restaurants and hotels. Together, they tell the story not of one America, but of many.

Researchers can find in the papers of the Works Progress Administration the records of the American Guide Series, a Depression-era project to create richly textured guidebooks of all of America’s states and major cities and some of its highways and waterways. The series generated 378 books and pamphlets altogether, and employed subsequently celebrated authors like Richard Wright, Eudora Welty and Zora Neale Hurston. 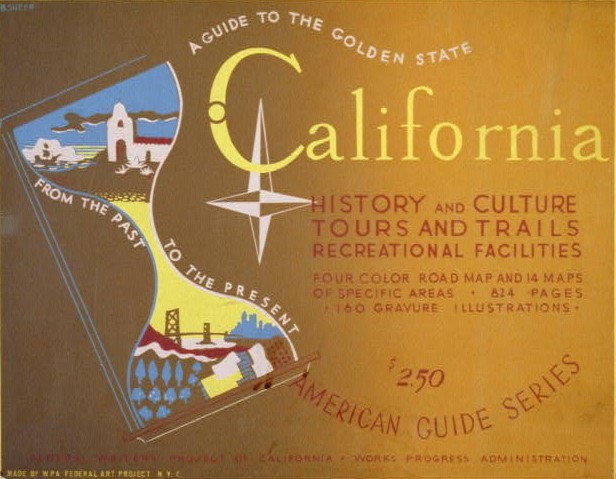 Poster for “A Guide to the Golden State,” WPA American Guide series for California. Prints and Photographs Division.

The WPA guides blended an attention to local history, culture and commerce with a literary sensibility. The project’s ambition still startles. An early prospectus promised to advance efforts to “preserve national literacy and historic shrines, to exploit scenic wonders and to develop natural advantages such as mines and quarries.” Steinbeck later called the guides “the most comprehensive account of the United States ever got together.” Staffers, sometimes road-tripping to fact check their work, labored to create a nuanced, encyclopedic account of what mattered about America — one mapped out in routes Americans could drive for themselves.

Yet not all Americans traveled those routes with the same ease. The records of the NAACP, held by the Manuscript Division, contain hundreds of testimonials speaking to the uncertainties and humiliations Jim Crow-era African Americans faced when they ventured from home. For these motorists, the automobile’s promise of freedom coexisted with segregated buses and trains and a range of limitations on their mobility. Black drivers experienced the open road, according to historian Cotten Seiler, as “both democratic social space and racial minefield.” Automobiles seemed to offer a real escape from Jim Crow, but one that always lay just beyond the horizon.

As a result, excursions often turned sour. One letter, submitted in 1947 by a high school science teacher, details an afternoon road trip to a state park near Albany, “for the purpose of sightseeing and enjoying the natural beauty of the State of New York.” When a hotel bartender within the park twice refused service to the teacher and a Jewish colleague, he insisted the hotel be “made to pay” for his “humiliation and damage to my pride.” Similar testimonials, of injustices on buses and trains and at roadside stops, illustrate the road trip’s unfulfilled promise for African American travelers. But they also suggest the allure of commanding one’s own vehicle and of sidestepping more communal forms of transit.

Travelogues in collections of personal papers offer another dimension still, documenting both cosmopolitan tourism and nostalgic returns home. A travel journal in the papers of sociologist Rilma Oxley Buckman describes a footloose road trip from Indiana to Alaska, taken in 1950 with a Purdue colleague in a late model Nash. The “lady campers” had met in Yokohama just after the war, both working with the U.S. military. Adventuring their way north, they socialized and took snapshots. They noted the “Huckleberry Finn riverscapes” of Illinois and Alaskan roads “wobbly as a wagon trail.” But their lives in Asia repeatedly intervene, from birds that resembled Korean magpies to the Japan-like hot springs of the Canadian Rockies and then to worrying radio reports about the start of the Korean War. 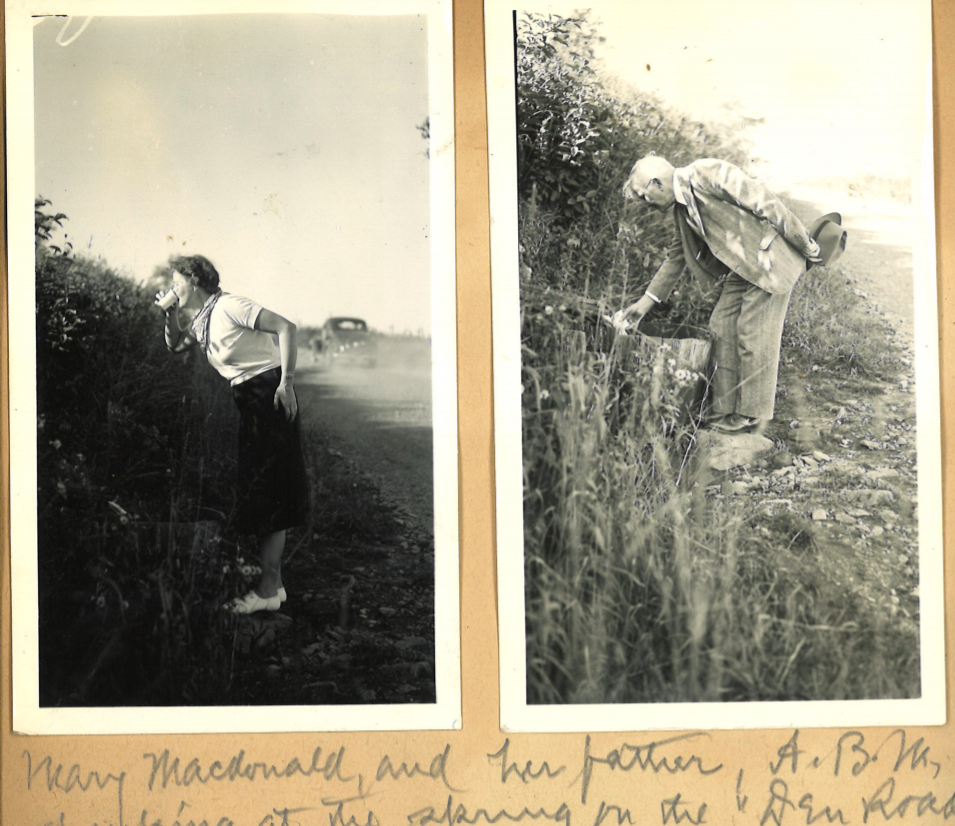 Page from A.B. McDonald scrapbook, with father and daughter drinking from a roadside spring. Manuscript Division.

A scrapbook made by journalist A.B. MacDonald recounts a road trip with his daughter Mary in 1938, just four years before he died. From Kansas City to his boyhood home in New Brunswick, father and daughter visit the old “homestead,” drink at a roadside spring where the family once watered their horses and catch up with boyhood friends. Captions are written two years later in a shaky hand, from MacDonald’s sickbed. By that time, Mary had tragically passed away. Above his recollections of an old schoolmate’s home, whose bed of nasturtiums both had admired as a “perfect blanket of gold and crimson,” two flowers just received by mail are pressed into the paper. There, MacDonald writes, “Later — I did put two of the flowers on Mary’s grave, and there they remained for several weeks. She knew, of course she did.”

And there are more. The Library’s manuscript collections show suffragists embracing the automobile as a vehicle for women’s liberation and activists like Sara Bard Field staging cross-country journeys to gain publicity for the cause. They show Carlos Montezuma, cofounder of the Society of American Indians, defending the rights of indigenous Americans to purchase automobiles without government permission and to travel as they please. We even find political satirist Art Buchwald in a comically overloaded Chrysler Imperial, on a 1958 road trip from Paris to Moscow in order to test whether such a drive can be made “without being arrested.”

Road trips appear in unexpected places, and they can be revealing in unexpected ways. And in a nation knitted together with highways, cars long ago became Americans’ liberating, frustrating, memory-making homes on the road.