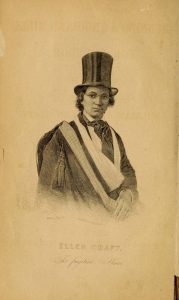 This is a guest post by Lavonda Kay Broadnax, digital reference specialist in the Library’s Research and Reference Services Division.

December is a month of holidays and festivities that bring families and friends together to celebrate their good fortune and look forward to the year ahead. For the enslaved couple William and Ellen Craft, the month of December 1848 promised more reason to celebrate than any they’d ever experienced. The potential was uncertain, however, and fraught with peril. After years of careful planning and preparation, this was the optimal time, they decided, to implement their plan to gain their freedom.

A search of all of the documents in the Library of Congress would be unlikely to yield a scheme for freedom more intriguing and daring than the Christmas escape strategy of the Crafts. Even though theirs is heralded as one of the most brilliant escapes from slavery in American history, it’s far less well known than the exploits of Harriet Tubman, Frederick Douglass or Josiah Henson.

The Crafts’ ingenious plan is documented in their 1860 narrative, “Running a Thousand Miles for Freedom; or, The Escape of William and Ellen Craft from Slavery.” The Library holds four different reprints of the account.

When Ellen Craft left her life as an enslaved person, she was dressed elegantly in a fashionable suit, stayed in the top hotels and traveled in first-class accommodations the entire route from Macon, Georgia, where she lived, to Philadelphia. But there was a twist: Ellen was disguised as a man, William Johnson, a very sick plantation owner traveling to Philadelphia for special treatment.

Resembling her father, Ellen could easily pass for white. She was the daughter of Major James Smith, a rich slaveholding cotton planter, and Maria, a young enslaved mulatto who worked in his house. Due to Ellen’s appearance, the plantation mistress frequently brutalized her. Ellen’s work in this wealthy household, though painful, gave her the opportunity to absorb the language and observe the behavior and nuances of southern aristocracy. The escape plan she and William formulated required Ellen to disguise herself as Johnson, because a “southern lady” surely would never travel alone with an enslaved male. She feigned illness during the trip, which discouraged conversation and interaction, justified dining alone in her room and provided a rationale for traveling north with her enslaved valet. Her right arm was placed in a sling to imply it was impaired, covering for her inability to write.

William Craft took the role of Johnson’s devoted enslaved valet. His appearance was well suited for this role, and it enabled him to nurture the ailing Johnson. He was trained as a cabinet maker, and it was customary for him to travel throughout the region. This travel gave him the opportunity to acquire knowledge that was important for the journey north. Though the money he earned as a cabinet maker was confiscated by his owner, he was allowed to earn separate funds that he kept. He used this money to pay for the many expenses on the route to freedom.

Christmas season was selected for their departure because it was one of the few occasions that enslaved people could get a “pass.” The holiday pass provided permission to visit nearby relatives for a few days and served as a great cover for the Crafts’ initial absence.

Their quest for freedom was well designed, but failure would result in severe consequences: brutal whippings, mutilated bodies, sale to the “deep” South or worse. From the beginning of their journey to the end, they faced harrowing experiences that caused them to question their ability to succeed.

The morning of departure, Ellen purchased train tickets to Savannah, the first leg of the journey. She chose a window seat in one of the best carriages but was filled with fear when she saw that the gentleman who approached to be her seat mate was Mr. Cray, a very close friend of her master who had known her for years. Her fears subsided when he greeted her, “It is a very fine morning, sir.”

Purchasing steamer tickets from Charleston, South Carolina, to Wilmington, North Carolina, proved to be a nearly unsurmountable challenge. To prevent white abolitionists from transporting and freeing enslaved persons, slaveholders purchasing tickets had to provide verification that each enslaved person with them was indeed their property. Often, this policy detained travelers for days. The Crafts were able to get around it only because a military officer from their previous steamer happened by and vouched for them.

With much joy and relief, Ellen and William Craft arrived safely in Philadelphia precisely on December 25, 1848. Freedom, what a magnificent Christmas gift!

The life stories, trials and tribulations of enslaved people such as the Crafts are found in a wealth of Library material. To explore these resources, an excellent starting point is The Slavery Resource Guide, compiled by the Library’s Researcher and Reference Services Division. This guide focuses on the wide range of digital material associated with the period of enslavement in various Library collections.