The fight began in a coal mine on the morning of Sept. 2, 1885, in Rock Springs, a rough-hewn village in the Wyoming Territory that lay along the Union Pacific Railroad.

White and Chinese miners, already at odds about wages, argued about who was going to work a rich vein of coal. A Chinese worker was killed in the ensuing fight, setting off the Rock Springs Massacre. That afternoon, a mob of at least 100 white men and women carrying rifles, shotguns, pistols, axes and knives surrounded and then rampaged through the Chinese neighborhood, killing 28, wounding dozens more, burning some 70 wooden houses to the ground and expelling all 500 or so Chinese residents.

“…nothing but heaps of smoking ruins marks the spot where China Town once stood,” the Las Vegas Gazette reported two days later. The newspaper noted that there were no Chinese in Rock Springs “except the dead and wounded.” Twenty-two white men were arrested, but none were prosecuted. The U.S. government eventually paid the Chinese government $147,000 in damages.

The Rock Springs Massacre is not a moment that rings out in the national narrative, as much of the violence directed at Asian immigrants in the 19th century is not widely remembered. But the rampage was the culmination of years of white workers’ resentment of Chinese laborers in the West and one of the deadliest. As Jean Pfaelzer writes in “Driven Out: The Forgotten War Against Chinese Americans,” there were dozens of such incidents: “…thousands of Chinese people who were violently herded onto railroad cars, steamers or logging rafts, marched out of town or killed” across the region in the second half of the 19th century.

As Asian/Pacific American Heritage Month comes to a close, the Library’s collections show that understanding our complete national story means understanding that Asians in the frontier territories were frequent targets of white violence, despite their invaluable work on railroads, in mines and other industries. The Old West was burnished into a gauzy myth by Hollywood cowboy movies and country songs in the early 20th century, but the reality was far less romantic and much more brutal. 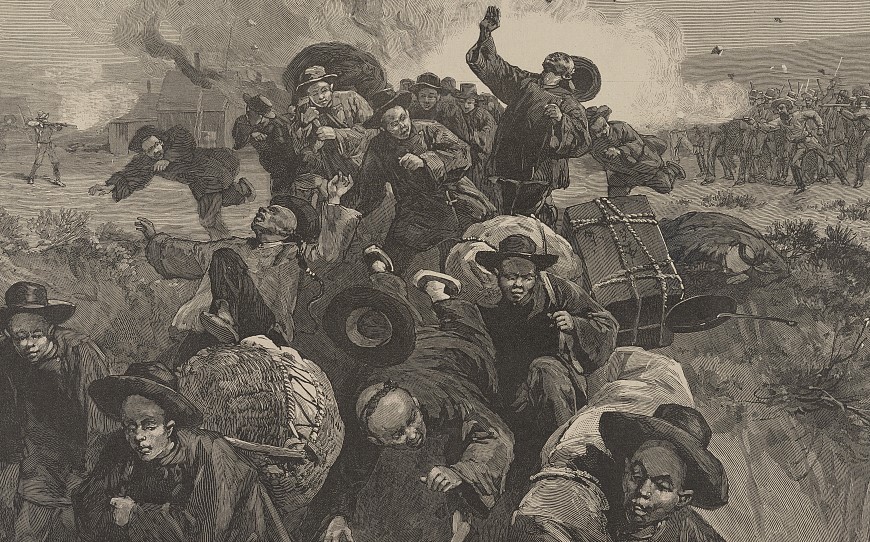 The Library’s collections document the issue, including Chinese immigration to the U.S. and the resulting waves of bigotry. There are Research Guides to building of the Transcontinental Railroad, which depended heavily on Chinese workers; the Chinese Exclusion Act of 1882; the Rock Springs attack; and years of newspaper and magazine articles in Chronicling America.

But there is more to flesh out the narrative. Maps and photographs of the Central Pacific and Union Pacific Railroads show settlements exploded across the region in the years after the nation was united by rail and the passage of the Homestead Act. And there’s a Sanborn Fire Insurance Map of Rock Springs that shows what the town – population, 2,900 — looked like, street by street, in 1890.

This 1883 map shows how towns in Wyoming sprung up along the Union Pacific Railroad. Rock Springs is the fifth stop before the railroad forks. Rand McNally and Company. Geography and Map Division.

Together, they piece together the story.

The California Gold Rush in the late 1840s drew some 25,000 Chinese workers, almost all men, to the state by 1851. Others followed. But the riches were largely an illusion, and the men, now stranded without the wealth they’d hoped to accrue and send back home, began to work in a number of hard-labor trades, often accepting lower wages than whites. This led to anger, resentment and attacks from whites.

In 1850 and 1862, California passed laws that charged Chinese miners and workers an extra tax. Also in 1862, Congress passed a law prohibiting Americans from bringing any more Chinese workers to the country, using a slur for Chinese workers in the official title. Conviction meant the ship’s forfeiture for the owner, and up to a year in prison and a $2,000 fine for anyone involved.

That didn’t mean the U.S. didn’t need the Chinese laborers’ work, though.

When Congress passed the Pacific Railway Act, also in 1862, it set into play the logistics for building the Transcontinental Railroad. Much of the dangerous work soon fell to thousands of Chinese workers. They labored on mountainsides, in gullies and ravines, with explosives and steel. Hundreds died. “On the Central Pacific Railroad alone, more than 10,000 Chinese workers blasted tunnels, built roadbeds, and laid hundreds of miles of track, often in freezing cold or searing heat,” the Library’s essay on the subject notes.

After the Golden Spike was driven in Promontory Summit, Utah, in 1869, Chinese workers were no longer so necessary to the national cause. They turned to working in mines and resentments grew. This culminated in the Chinese Exclusion Act of 1882, which prevented Chinese citizens from immigrating to the U.S. for an initial 10 years, but stayed in effect until 1943.

Such was the anti-Chinese mood in September of 1885 in Rock Springs.

The town, a collection of wood-frame businesses and houses, was centered around the mine and the railroad. A few hundred Chinese workers bunked together, mostly in houses provided by Union Pacific. White miners, organized by the Knights of Labor, wanted to strike for higher wages. The railroad was happy to use Chinese laborers but pay them less. The Chinese miners, in a far more vulnerable position than their white counterparts, had little interest in striking.

So, when the fight started in mine No. 6 that morning, white miners saw it as an opportunity to get rid of the group that was undercutting their demands. The mob assembled quickly, newspaper accounts reported. They surrounded the small Chinese district, giving the men an hour to get out, but descended on them beforehand, newspapers reported, setting fire to houses as they went. The Chinese fled, “without offering resistance,” but were shot at as they ran for hills about a mile outside of town. Others, who tried to hide in their houses, burned to death.

The attack made national news and was almost universally condemned. Some Chinese workers were brought back to the mine by the railroad company – mostly against their will – but the community dwindled. By 1890, Union Pacific designated only one building in Rock Springs to house Chinese workers, down from 50 at the time of the massacre, according to the Sanborn map. 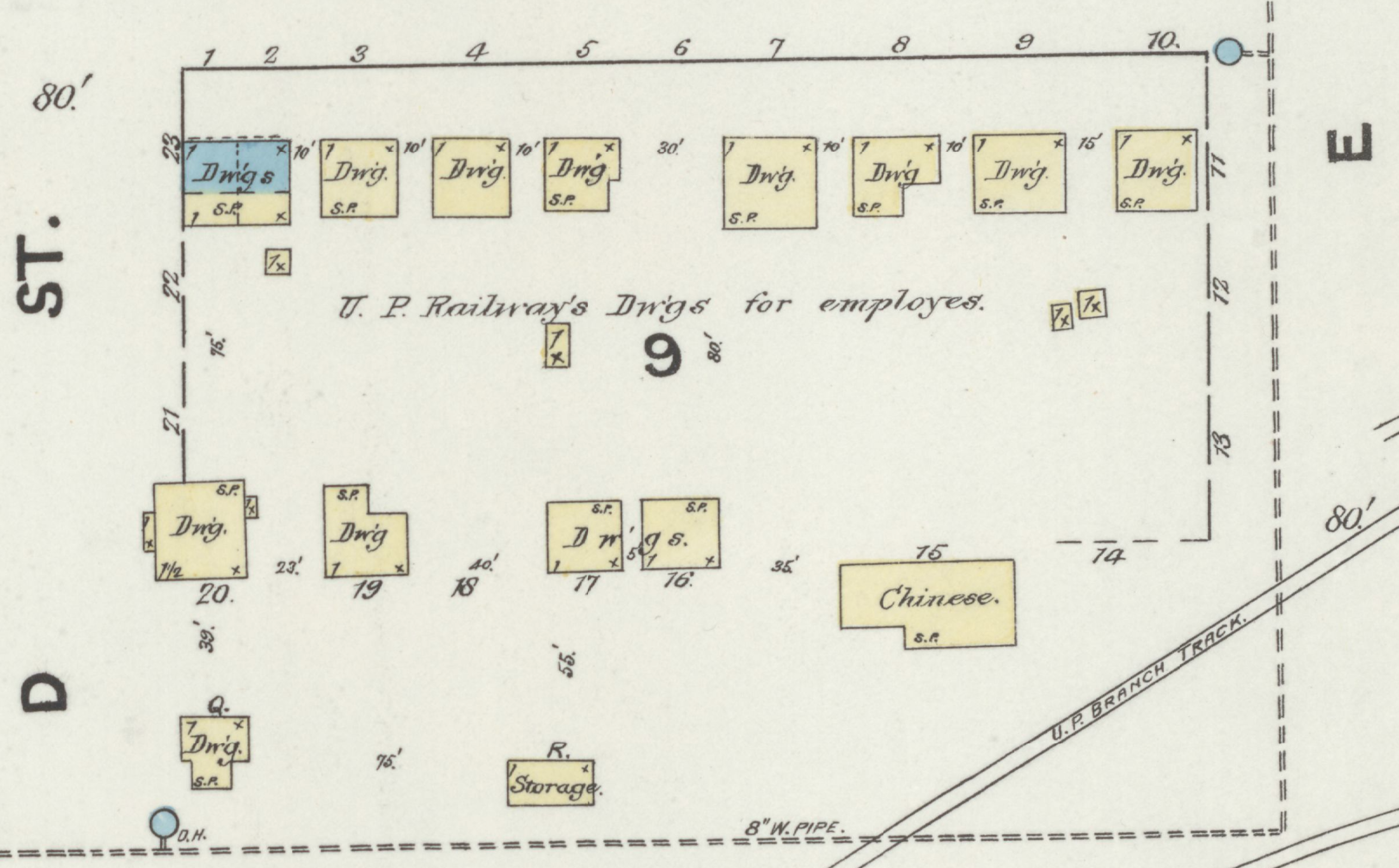 Today, a small museum in nearby Evanston documents the history of the Chinese miners in the region, but most had departed the region by the 1930s. The U.S. Census Report for 2019 shows that only 1.1 percent of Wyoming’s population is Asian (of any national background). In Rock Springs, the Asian population is 0.6 percent, or about 260 people.