Welcome to week two of our blog series for “Baseball Americana,” a major new Library of Congress exhibition opening June 29. This is the second of nine posts – we’re publishing one each Thursday leading up to the opening, then we’ll feature posts about different topics related to the yearlong exhibition. As a bonus, we’re counting down the innings to the exhibit’s launch by asking baseball fans a question each week. Your second question is at the bottom of this post. Join the conversation!

No sport has inspired as much music: Pop songs and polkas, quicksteps and two-steps, mambos and marches, waltzes, foxtrots, rags, quadrilles, schottisches, cantatas and even operas have been written in celebration of America’s game.

The Library of Congress, through its copyright function, holds one of the world’s largest collections of baseball sheet music – a chronicle of more than 150 years of passion for the national pastime.

“Hundreds of examples reside among our general and special collections,” said Susan Clermont, a senior specialist in the Music Division. “But what makes our collection of baseball music unique is the works that came into the Library via the U.S. Copyright Office as copyright deposits. Here lie some of the most elusive examples of lesser-known published songs and unpublished works for which we hold the only copy.” 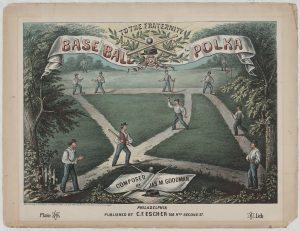 Sheet music cover for “Base Ball Polka.” This version, by Jas. M. Goodman, was copyrighted in 1867, nine years after Blodgett’s composition of the same name.

Most of the music celebrated the pleasures of a day at the ballpark, great players, a hometown team or, as in the case of the earliest known baseball-related composition, a rival club. J.R. Blodgett, a player for the Niagara Base Ball Club of Buffalo, N.Y., wrote “The Base Ball Polka” and dedicated it to an opposing team, the Flour City Base Ball Club of Rochester.

Blodgett’s tune was submitted for copyright registration at the Library on Oct. 21, 1858, and, like many early baseball compositions, was an instrumental.

Those polkas, marches and waltzes fit the social nature of the game in the years just before the Civil War and in the decades that followed, says Tim Wiles, director of research at the National Baseball Hall of Fame in Cooperstown, N.Y.

Players wore festive uniforms, celebrated at banquets after the game and sometimes staged parades to and from the grounds. The run-over-the-catcher, win-at-all-costs mentality didn’t yet exist.

“To understand it, we need to lose the notion that it was just about beating the other club, which is part of baseball today,” Wiles says. “It was a bit of a celebration – of baseball, of civic pride and also of this newfound leisure activity these middle-class gentlemen in the clubs were able to have that maybe their fathers and grandfathers didn’t.”

Baseball Meets Tin Pan Alley
The game grew up, and the music grew with it. The American League began play in 1901, joining the National League. The first World Series was played in 1903. Big stars like Honus Wagner, Ty Cobb, Walter Johnson and, later, Babe Ruth emerged. Music publishing was changing, too.

Tin Pan Alley, the popular-music publishing industry, produced thousands of tunes for the public around the turn of the century, many about baseball. The subject matter expanded, too: Baseball songs weren’t always just about baseball anymore.

After World War I, Bertha Stanfield Dempsey published “America’s Pinch Hit March,” a tribute to the Allies’ victory. The tune is an instrumental, but the sheet music’s cover illustration tells the story: Uncle Sam drops his bat and heads toward first, German troops futilely chase the ball in the outfield, the Allies round the bases, and the Kaiser stalks the mound in frustration after surrendering a war-ending base hit. 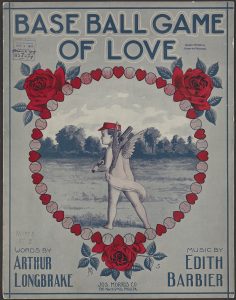 “Base Ball Game of Love” (1909). Songwriters frequently used baseball as a metaphor for romance.

Most often, baseball is a metaphor for romance.

“I’ve sacrificed and bunted my heart,” Eleanor Gehrig wrote. “The game is over … I can’t get to first base with you.”

The first tune published by British playwright and songwriter Noel Coward was about baseball. In “The Baseball Rag,” copyrighted on Nov. 1, 1919, the composer of “Mad Dogs and Englishmen” went a little mad himself about America’s game: “It’s a dope, it’s a dream, it’s a yell, it’s a scream, Gee! That baseball rag.”

The music often celebrated favorite teams and great players: “Oh, You Red Sox” and “The A’s are the Craze,” Cobb (“King of Clubs”) and Ruth (“Babe Ruth: He’s a Home Run Guy”). Before the Babe, there was a King. In 1889, J.W. Kelly paid tribute to baseball’s first superstar, Mike “King” Kelly, with a hugely popular tune, “Slide, Kelly, Slide!”

“He was Babe Ruth before Babe Ruth came along. Kelly was immensely popular,” Wiles says. “That phrase, ‘Slide, Kelly, slide,’ still is in the baseball lexicon many years later. People will throw that phrase around in baseball circles without necessarily knowing who Kelly was or what it means.”

Some topics in baseball, and baseball music, are timeless.

“Go somewhere and die, back to the bush, you’ve got mud in your eye,” Croker yells.

Nothing spurred the popularity and production of baseball songs more than the tune that put peanuts and crackerjack together and, 105 years after its creation, still is sung at ballparks across America.

Baseball’s Greatest Hit
On May 2, 1908, the U.S. Copyright Office received two copies of “Take Me Out to the Ball Game,” submitted by composer Albert von Tilzer and lyricist Jack Norworth. 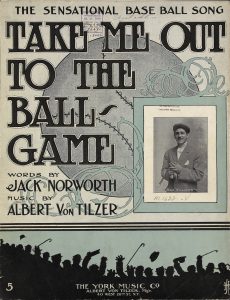 “Take Me Out to the Ball-Game” (1908) inspired imitations and a horde of other songs about baseball.

In the song, diehard fan Katie Casey asks her beau to take her to a game, not a show. After the second verse, Katie leads the crowd in the famous chorus. The song was immensely popular and, Boziwick says, struck a blow for women. Previous songs, he says, treated women at the ballpark in a condescending way: “She’s a regular fan, like a regular man. She knows just what to do and say.”

“Take Me Out to the Ball Game” was different. “The song is a welcoming experience,” Boziwick says. “It’s not a putdown, like other songs. It allows a woman to be at the ballgame and also to be knowledgeable and to participate. People don’t realize how important that was at the time.”

Much baseball music still is created today. “There are, by my estimation, about 1,000 baseball songs that have been written and published on record albums and CDs since World War II,” Wiles says.

The game might have been popular in any age. Sportswriter Ring Lardner in 1911 published a song in which he imagines Christopher Columbus sitting in the stands at a baseball game.

A bibliography of published baseball music and songs in the collections of the Music Division is available on the Library’s website.

BONUS QUESTION
What would be your walk-up song?

“Baseball Americana” features items from the Library of Congress collections and those of its lending partners to consider the game then and now – as it relates to players, teams and the communities it creates. The Library is partnering with ESPN, Major League Baseball and the National Baseball Hall of Fame and Museum in presenting the exhibition.