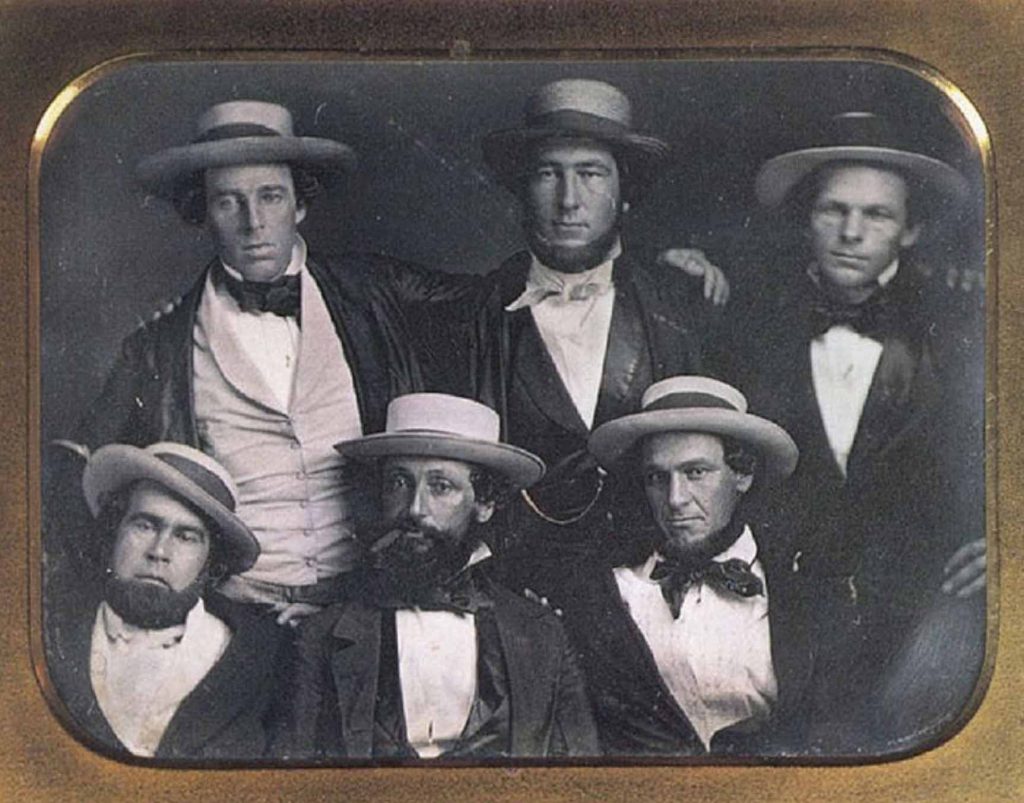 Welcome to week five of our blog series for “Baseball Americana,” a major new Library of Congress exhibition opening June 29. This is the fifth of nine posts – we’re publishing one each Thursday leading up to the opening. As a bonus, we’re counting down the innings to the exhibit’s launch by asking baseball fans a question each week. Your question for this week is at the bottom of this post. Join the conversation!

Knickerbockers president Daniel “Doc” Adams (bottom row, middle) imagined and recorded in his own hand the original draft of the “Laws of Base Ball.”

For decades, the documents that laid the foundation for America’s pastime were stashed away and forgotten, only to be discovered by the wife of an Italian prince. They’ve been misunderstood, unappreciated and sold for a relative pittance, rediscovered, researched and auctioned off for millions.

Now, the papers that first set forth the rules of modern baseball finally are ready to claim their proper place in history, 161 years after officials of a New York club proposed them to a convention of local teams. In June, those original documents, titled the “Laws of Base Ball,” will go on display at a major public exhibition for the first time when the Library of Congress opens its new exhibition, “Baseball Americana.”

Before that convention, the game included elements of something that might be recognized as baseball today—two opposing teams whose players used bats and balls and ran bases in a circular fashion. But there were drastic differences, too, according to John Thorn, Major League Baseball’s official historian.

“Some played with 11 men, some played with eight,” Thorn says. “Nobody played to a game of nine innings; they played to 21 runs. In the Massachusetts game, which had quite different rules … the number of runs required for a victory might be specified at the outset as either 75 or 100.” 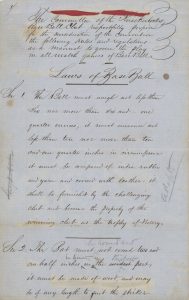 Knickerbockers officials presented these proposed “Laws of Baseball”—elegantly scripted in ink—to the rules committee at the 1857 convention, where the rules were debated, amended and adopted.

The Knickerbockers, a prominent New York team, organized the January 1857 convention of clubs to modify and standardize the game’s rules—a gathering that profoundly shaped the sport. “The convention was enormously important,” says Thorn, who likens the documents to a baseball Magna Carta or the Dead Sea Scrolls.

The proposed rules submitted to the convention’s rules committee, elegantly handwritten on 14 pages of blue paper, made baseball more like the game we know today, setting bases 90 feet apart, putting nine players on each side, establishing nine innings as a game, defining what constitutes an out and more.

This “Magna Carta,” on loan to the Library by Hayden J. Trubitt for the exhibition, actually consists of three sets of documents: separate drafts of rule proposals by two Knickerbockers officials and the final, formal document the club’s delegates presented to the convention rules committee.

The first is a handwritten draft of 23 proposed rules titled “Laws of Base Ball” written by Knickerbockers President Daniel “Doc” Adams—a man Thorn has called the “true father of baseball.”

Adams was born in New Hampshire, earned a medical degree from Harvard, moved to New York and joined the Knickerbockers soon after the club’s 1845 founding. There, Adams is credited with inventing the shortstop position and with helping standardize equipment—he made balls and supervised the production of bats.

He also pushed for a convention to standardize rules. The proposals Adams put down on three now-browned pages—a fourth likely existed but didn’t survive—gave America a game that, today, it still would recognize: Rule No. 3 places the bases 90 feet apart. No. 4 designates the position from which the ball is struck as “home base,” directly opposite second. Rules 10–14 define ways batters can be put out. Sixteen establishes a regular order of batters.

The second document, “Rules for Match Games of Base Ball,” presents a different vision, one attributed to Knickerbockers official William Grenelle. A Wall Street broker, Grenelle joined the club in 1850 and later served as a director and as a member of the convention organizing committee.

The four pages of the Grenelle draft bear edits, attributed to Adams, that would become key points: In a passage that set the number of innings in a game, Adams struck out “twelve” and penciled in nine.

The final document, formally written in ink by Grenelle and also titled “Laws of Base Ball,” was presented to the rules committee, which debated and amended the proposals, then presented them to the convention as a whole for ratification. Beneath a red ribbon threaded through the page, Grenelle inscribed, “The Committee of the Knickerbockers Base Ball Club respectfully proposes for the consideration of the convention the following rules and regulations as a manual to govern the play in all match games of Base Ball.”

The pages contain proposals for 34 rules, including two penciled in at the convention. The text is filled with alterations made as committee members debated and adopted rules: The number of innings originally is noted as nine, for example, then changed in pencil to seven—a decision later overturned in favor of nine.

The new way of playing laid forth in those pages took hold—though slowly. “It took forever,” Thorn says. “The old rules—some of them town ball, or the Massachusetts game—vestiges endured. There wasn’t blanket uniformity, there were always clubs that decided to play with 11 men or two catchers.”

A few years after the convention, Adams moved to Connecticut, where he served as a bank president, and died in 1899. Grenelle died in 1890, leaving behind a wife and children—and the original documents that helped establish baseball as we know it. Those papers remained with the family and out of public awareness for more than a century after the convention—until 1967, when Grenelle’s granddaughter wrote a letter to the National Baseball Hall of Fame.

“I have discovered among my old family papers one which I am told is of great value and interest in the history of baseball,” wrote Constance Grenelle Wilcox Pignatelli, a fascinating character who had married an Italian prince.

The Hall of Fame declined to take the documents, which didn’t surface again for over three decades. In 1999, the papers appeared in a manuscript auction, offered with little background information. A collector purchased the lot, sight unseen, for $12,650, then put them away for 16 years. Finally, he enlisted help in fully researching their origins and, in 2016, put them up for auction—where they sold for over $3.2 million.

Now, those pages, aged and stained, will be available for the public to see at a major exhibition for the first time, a century and a half after they helped invent modern baseball.

Says Thorn: “To hold history in your hands, as it was made in Adams’ hand and Grenelle’s hand and in the final versions, that is pretty spectacular.”

BONUS QUESTION
What is your most treasured piece of baseball memorabilia?