This is a guest post by Brett Zongker of the Communications Office.

Welcome to the blog series for “Baseball Americana,” a major new Library of Congress exhibition opening June 29. We’ll be publishing nine posts – one each Thursday – leading up to the opening, then we’ll feature posts about different topics related to the yearlong exhibition. This first post is an overview of the exhibition. As a bonus, we’re counting down the innings to the exhibit’s opening by asking baseball fans a question each week. Your first question is at the bottom of this post. Join the conversation!

The 1857 handwritten “Laws of Base Ball,” cited by historians as the game’s “magna carta,” will be among the artifacts featured in the new exhibition “Baseball Americana” opening June 29 at the Library of Congress. The exhibition will explore baseball’s past and present and how the game has forged a sense of community for players and fans across the country. Also on display will be Babe Ruth’s shoes, the Rockford Peaches uniform and Jackie Robinson’s letters. 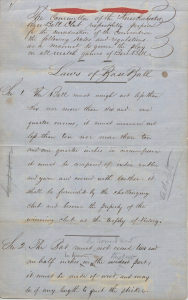 The “Laws of Base Ball” as decided during the Base Ball Convention of 1857. The handwritten corrections reflect negotiations that took place during the proceedings.

The founding documents of baseball that would shape the modern game as our national pastime were ironed out in January and February 1857 at a convention called by the Knickerbockers Base Ball Club in New York City. Corrections were made by hand as the details were negotiated by New York-area ball clubs, including whether to play seven, nine or 12 innings to a game. The convention established a uniform set of rules, many of which are still in use today, including nine players on a side, nine innings to a game and 90 feet between bases.

Long thought to be lost, the original “Laws of Base Ball” manuscripts were saved by an heir of a Knickerbocker delegate to the convention. They resurfaced in 1999 and sold at auction, but their significance was not understood. They were sold again in 2016, and the buyer is lending the documents for their first major exhibition.

In addition to the extensive baseball holdings of the Library of Congress, “Baseball Americana” also will feature items from the National Baseball Hall of Fame and Museum, including Babe Ruth’s shoes and his 1921 agreement with the New York Yankees, Dottie Key’s uniform from the Rockford Peaches and Ty Cobb’s 1908 contract with the Detroit Tigers. A selection of baseball gloves, bats, balls, shoes and catchers’ masks from past and current professional players will show how the game has evolved over the centuries. 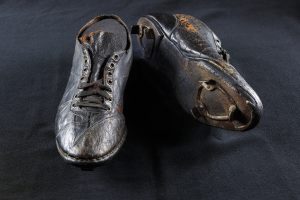 Featured artifacts from the Library will include Jackie Robinson’s letter of thanks and appreciation to baseball executive Branch Rickey after Robinson broke baseball’s color barrier, the first handwritten and printed references to “baseball” in America from the 1780s, historical images, early baseball cards, film footage from the 1890s to the present, broadcasts of iconic baseball moments and rare interviews with Hall of Fame players.

ESPN’s Statistics and Information Group collaborated with the Library to develop original content in the form of statistics, trivia questions and historical comparisons to offer new insights into America’s game for everyone, from rookies to the most die-hard baseball fans. These items are designed to give a unique spin on the Library’s collection, spark conversation and compare baseball present with baseball past.

Major League Baseball is also contributing video footage from its massive and incomparable archive for the exhibition to help create an immersive experience for visitors.

“Baseball Americana” will open June 29, just before Nationals Park in Washington, D.C., hosts Major League Baseball’s 89th All-Star Game on July 17. An All-Star Family Day program is planned for Saturday, July 14, from 10 a.m. to 4 p.m., with a variety of activities for all ages.

To coincide with the exhibition, Harper Perennial will release an updated edition of “Baseball Americana: Treasures from the Library of Congress” in May. This illustrated history of baseball includes more than 350 images and numerous milestones of the game.

The exhibition is made possible by the Library of Congress Third Century Fund, the James Madison Council and Democracy Fund.

“Baseball Americana” features items from Library of Congress collections and those of its lending partners to consider the game then and now – as it relates to players, teams and the communities it creates. The Library is partnering with ESPN, Major League Baseball and the National Baseball Hall of Fame and Museum in presenting the exhibition.

BONUS QUESTION
How did you become a baseball fan? Include your answer in a comment to this post!