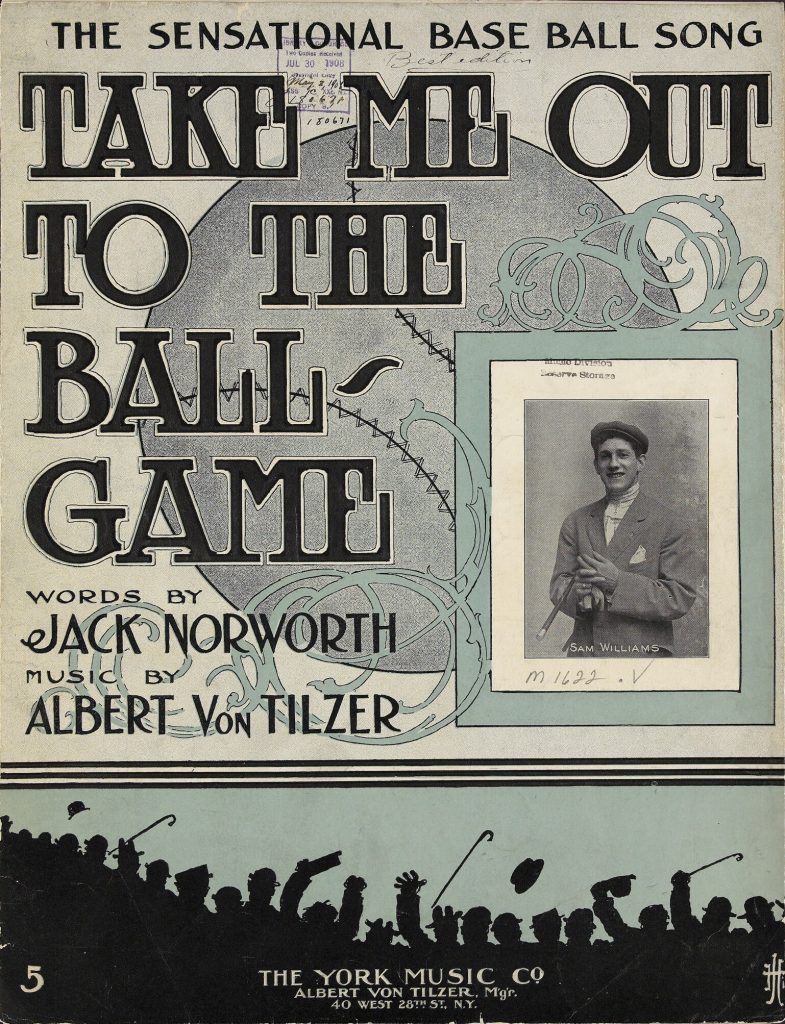 Welcome to week six of our blog series for “Baseball Americana,” a major new Library of Congress exhibition opening June 29. This is the sixth of nine posts – we’re publishing one each Thursday leading up to the opening. Matthew Barton, a record-sound curator in the Motion Picture, Broadcasting and Recorded Sound Division contributed this post.

Lyricist Jack Norworth and composer Albert Von Tilzer submitted two copies of their new song, “Take Me Out to the Ball Game,” with a copyright registration in 1908.

More than a century after its debut, “Take Me Out to the Ball Game” stands as one of America’s best-known and most-loved songs—today, the unofficial anthem of baseball and a joyful ode to the pleasures of the ballpark.

The Library of Congress holds an original 1908 Edison cylinder of the first recording of the song, a rendition by Edward Meeker that in 2010 was selected for inclusion on the Library’s National Recording Registry for its cultural, historical and aesthetic importance.

Composers Jack Norworth and Albert Von Tilzer’s song was released early in the 1908 baseball season and quickly caught on with the public—reports recount it being sung in vaudeville and played by brass bands throughout the country, especially around Detroit, where the Tigers were embroiled in a four-way pennant race.

And if you were walking down the street in Manhattan in the late summer or early fall that year, you might have heard a young man sing this new song to promote the recently released Edison recording of it.

That would have been Meeker, who like other Edison recording artists in those days before radio, often sang on New York City street corners, in saloons and even on the steps of the main branches of the public library and post office to promote their recordings.

Today, everyone knows the chorus, but it is disconnected from the song’s story of a baseball-mad young woman named Katie Casey:

On a Saturday, her young beau
Called to see if she’d like to go,
To see a show, but Miss Kate said “No,
I’ll tell you what you can do:
“Take me out to the ball game …”

Northworth and Von Tilzer’s song inspired a slew of other baseball songs in the next few years. Those faded away quickly, but “Take Me Out the Ball Game” is well into its second century of popularity.

BONUS QUESTION
What is your most memorable baseball moment?