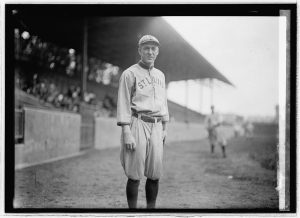 Welcome to week four of our blog series for “Baseball Americana,” a major new Library of Congress exhibition opening June 29. This is the fourth of nine posts—we’re publishing one each Thursday leading up to the opening. As a bonus, we’re counting down the innings to the exhibit’s launch by asking baseball fans a question each week. Your third question is at the bottom of this post. Join the conversation!

When Jackie Robinson walked onto the Ebbets Field diamond in 1947 and broke baseball’s color barrier, he made history and remade America’s game, forever changing the sport, the culture and the country.

The Library of Congress holds the papers of both Robinson and the man who helped him break that barrier, Branch Rickey—two great figures linked in baseball history.

Rickey flopped as a player and achieved only modest success as a manager. Yet, as an executive, he helped reshape the game. He invented the farm system and the batting helmet, encouraged the use of batting cages and pitching machines and hired a full-time statistician, foreshadowing modern “sabermetrics.”

Player development was a special Rickey talent—the Cardinals teams he built won four World Series. “He could recognize a great player from the window of a moving train,” sportswriter Jim Murray once wrote. His skill as an evaluator is captured in the 29,400 items of the Library’s Rickey Papers: Among the letters, speeches, memos and scrapbooks are some 1,750 scouting reports he wrote in the 1950s and 1960s, assessing prospects and current players.

“His work on the hill itself has an unusual amount of perfection. … It is probable that this chap is worth whatever it takes,” Rickey wrote about future Hall of Fame pitcher Don Drysdale in 1954, two years before his major league debut.

Others are brutally to the point: “Can’t throw. Can’t run. Can’t hit”—Rickey’s six-word assessment of a prospect who would last only a year in the majors.

One of his great legacies was his work to integrate baseball—he signed Robinson as the right man for the job. 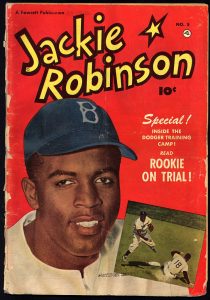 Robinson had lettered in four sports at UCLA, was drafted into the Army in 1942 and, following his discharge, joined the Negro Leagues’ Kansas City Monarchs in 1945.

That year, Rickey, then a co-owner and the general manager of the Brooklyn Dodgers, signed Robinson to a minor league Dodgers affiliate with an eye to eventually breaking the majors’ color barrier. Robinson, he felt, could handle the abuse sure to come—he had “guts enough not to fight back.”

Two years later, Robinson joined the Dodgers and made history. Playing under intense scrutiny and often open hostility, Robinson proved to be one of baseball’s best players: He earned the National League Most Valuable Player award in 1949, competed in six World Series in 10 years, compiled a .311 lifetime batting average and, in 1962, six years after he retired, was elected to the Hall of Fame—the first black player inducted.

After his Dodgers debut, Robinson’s story quickly captured the nation’s imagination. Other Library collections illustrate his place in popular culture: the 1951 Jackie Robinson comic book bears his likeness on the cover, a script bears signatures of Robinson and his fellow cast members in the 1950 biopic, “The Jackie Robinson Story.” 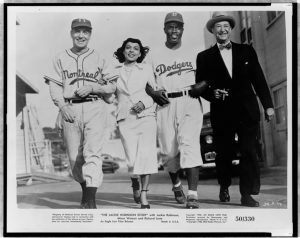 In 1950, Rickey sold his stock in the Dodgers and joined the Pirates. In a letter, Robinson bid him a sad farewell.

“It has been the finest experience I have had being associated with you and I want to thank you very much for all you have meant not only to me and my family but to the entire country and particularly the members of our race. … I hope to end my playing in Brooklyn as it means so very much but if I have to go any place I hope it can be with you.”

In history, and in the Library’s collections, they’re still together.

BONUS QUESTION
What is your go-to baseball food?

“Baseball Americana” features items from the Library of Congress collections and those of its lending partners to consider the game then and now – as it relates to players, teams and the communities it creates. The Library is partnering with ESPN, Major League Baseball and the National Baseball Hall of Fame and Museum in presenting the exhibition, made possible by the Library of Congress Third Century Fund, the James Madison Council and Democracy Fund.