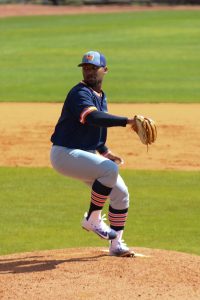 This post is by Marcos Castillo, a 2018 intern with the Junior Fellows Program. He is a senior at Lincoln University of Pennsylvania. This summer, he worked in the Library’s Hispanic Division.

The opening this June of the exhibition “Baseball Americana” at the Library of Congress prompted me to think about the history of our national pastime. Baseball is not only a national phenomenon, but an international marvel as well. While interning in the Hispanic Division, with access to its remarkable collections, I learned more this summer about how the game became a significant part of Hispanic culture in Latin America and the United States.

As a member of the Hispanic community myself, and the ultimate baseball fan, I am fascinated by the impact of baseball on the Hispanic community and the community’s impact on baseball. Had I not had professional Hispanic baseball players as role models, I know I would have found it difficult, as an average player, to envision playing on a college baseball team on an athletic scholarship, as I do at Lincoln University. Moreover, if it were not for my favorite player, Mariano Rivera, from my family’s home country of Panama, I would not have had the privilege of being part of the Library’s Junior Fellows Program – and I would not have written this post! – because baseball is what motivated me to pursue a degree.

When tracing how Hispanics became part of U.S. baseball, we have to look back to the 1860s when the first Cuban player joined a professional U.S. league. Estevan Enrique Bellán, born in Havana, made his baseball debut in the U.S. in 1868. Earlier, Cuban students studying in the U.S. had brought the game back home and helped to develop its popularity. 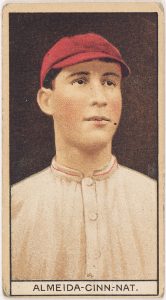 Cuban-born Rafael Almeida is featured on this tobacco company baseball card. One of the first Hispanics to compete in the major leagues, he played for the Cincinnati Reds from 1911 to 1913.

In 1878, the inaugural game of the Cuban baseball league took place, starting a trend. Soon, other countries, including the Dominican Republic, Venezuela and Mexico, formed their own leagues, producing many players who eventually played in the U.S.

It took time for Hispanic players to be accepted into mainstream American baseball. But thanks in large part to outstanding players like Rod Carew (Panama), Roberto Clemente (Puerto Rico), Tony Pérez (Cuba) and Fernando Valenzuela (Mexico), Latin America is now a key region for developing players’ skills and a leading source for scouts looking for new players. And Latin American countries have embraced the sport as part of their culture. 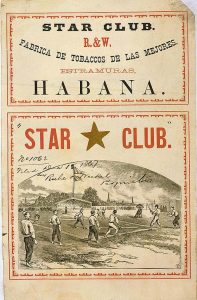 Print of a tobacco-package label from Cuba showing a baseball game, circa 1867.

Today, we can truly see the impact that Hispanic players have had on Major League Baseball (MLB). In 2017, they made up 31.9 percent of the league, according to the Institute for Diversity and Ethics in Sport, the highest percentage ever in MLB history. They are represented on every MLB team – each team has at least one Hispanic player. And some of contemporary baseball’s greatest stars are either from Latin America or of Latin-American descent, including José Altuve (Venezuela), Nolan Arenado (Cuba/Puerto Rico), Robinson Canó (Dominican Republic), Aroldis Chapman (Cuba) and Francisco Lindor (Puerto Rico).

Apart from sheer numbers, Hispanic players act as ambassadors for the game, inspiring young players to continue pursuing their dreams of playing league ball no matter their circumstances.

From the strong foundation early players created in the 19th century to the great players of today’s MLB, Hispanics have influenced baseball in important ways. With their numbers increasing, they no doubt have much more to achieve.

Baseball scholar Roberto Gonzalez Echevarria, author of “The Pride of Havana,” speaks at the Library in 2006.

Journalist and author Cesar Brioso discusses his book “Havana Hardball: Spring Training, Jackie Robinson and the Cuban League” at the Library in 2016.