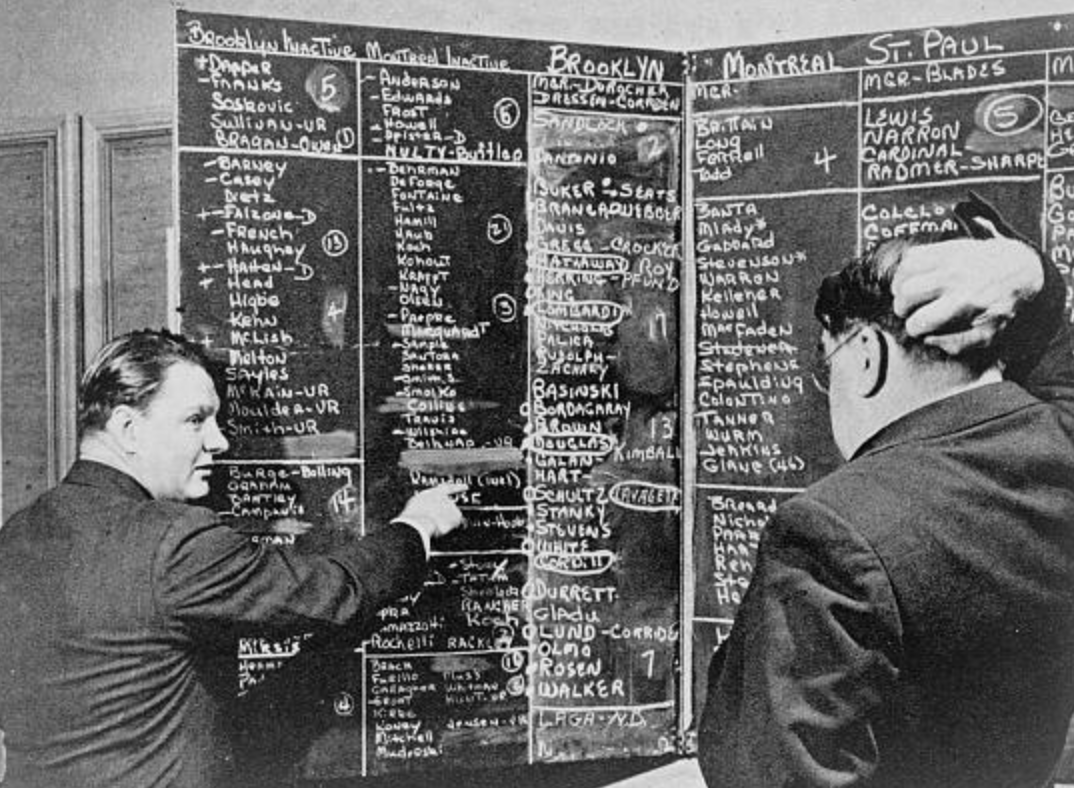 This is a guest post from Lauren Algee, LC Labs Senior Innovation Specialist.

Just four months after the Library partnered with the public to transcribe the papers of baseball icon Branch Rickey, volunteers have transcribed all 1,926 pages of Rickey’s scouting reports, making them available for digital research just in time for Major League Baseball’s opening day.

These community-created transcriptions allow for keyword search and on-line scholarship, opening new avenues for baseball fans and researchers. The completed data is also available as a bulk download from LC Labs. Our volunteers showed amazing hustle in finishing so quickly. Their work now makes it possible for data research, including text analysis examining Rickey’s diction, or looking for patterns in names, places, or dates. Analyzing the texts as data can also reveal patterns and prompt new questions. We offer a respectful tip of the cap to our volunteers.

The Library’s Rickey papers are extensive, including 29,000 items of correspondence, photographs, memoranda, speeches, and more. His scouting reports, compiled during the 1950s and 1960s, show him to be an astute, if caustic, judge of talent. Some resemble modern-day tweets in their brevity and wit. After watching a 1953 minor-league double-header, he summed up 29-year-old Bob Wakefield, who’d been bouncing around the minors for half a dozen years, in one sentence: “I think he’s a good man to get rid of.” 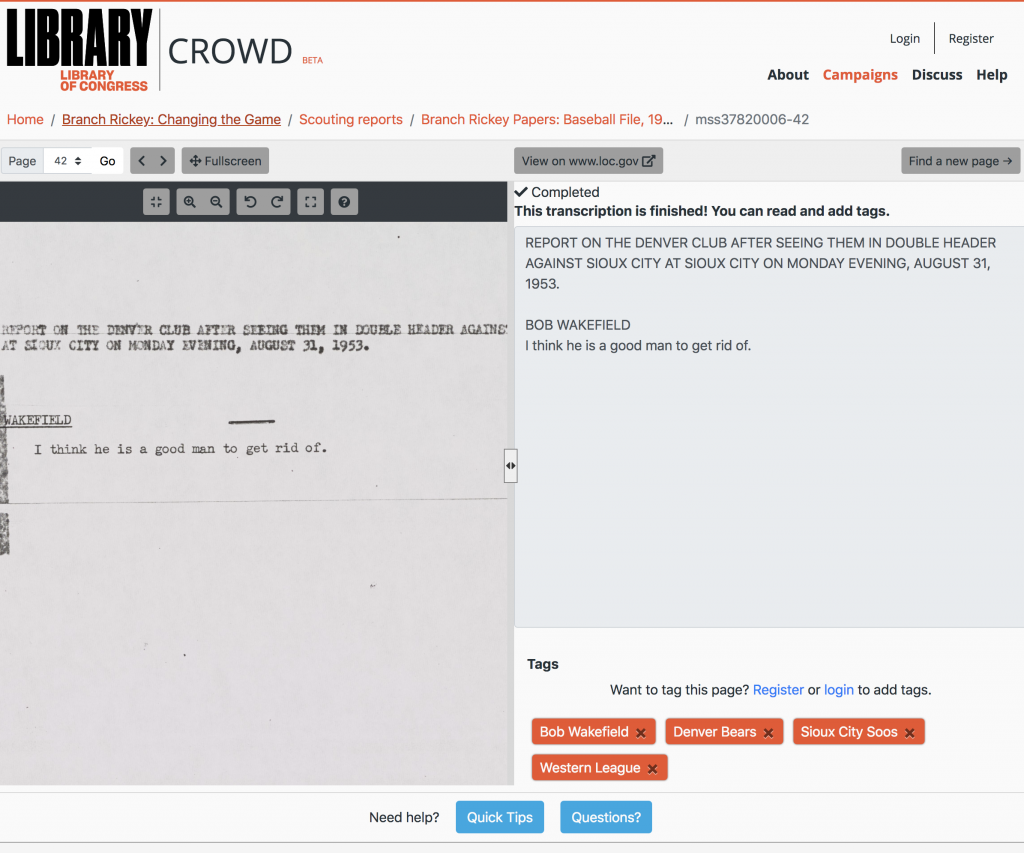 At the Library, Rickey’s scouting reports were scanned in 2018 but could not easily be turned into searchable text. Many of the documents are grainy photocopies, including forms and tables, which stymied word-recognition software.

So, on Oct. 24, 2018, the Library launched By the People, a web-based crowdsourcing program, to harness public energy in transcribing the papers of Rickey and several other historical luminaries. The work these volunteers do improves the search, access, and computation of our digitized collections. Other By the People campaigns include letters to Abraham Lincoln, the diaries of Clara Barton, the personal papers of Mary Church Terrell and writings by disabled Civil War veterans. Volunteers have transcribed more than 10,000 pages so far. 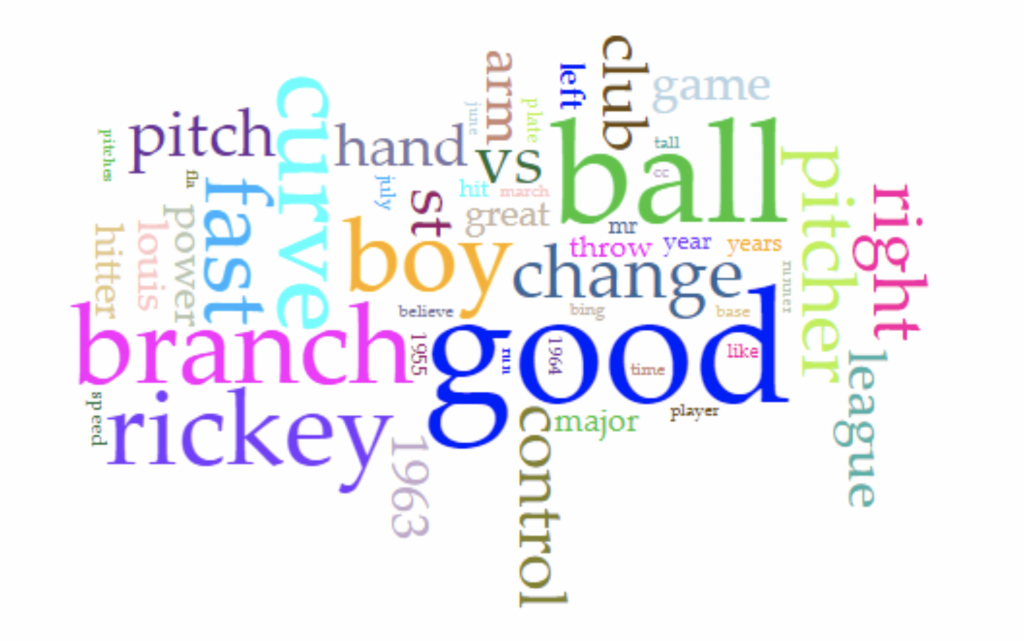 To illustrate some of the research uses that can now be carried out on Rickey’s collection, the By the People team used Voyant Tools, a web-based text analysis environment, to make some initial forays into the data.

Many of the documents from the early 1960s, when Rickey advised the St. Louis Cardinals. These notes included a tag, “cc: Bing Devine,” the team’s general manager from 1957 to 1964, 266 times, thus illustrating Rickey’s close ties to top management.

But our analysis of “bing” also revealed a surprise – one instance of “Bing Crosby.”

This came from a 1951 report on pitcher Vern Law that Rickey put together for the Pittsburgh Pirates. Rickey was almost as unimpressed with Law as he was with the hapless Wakefield. He said the young player was overpaid by half and that he should be sent to a training camp in Florida. Law would either become a better pitcher or he “won’t be worth very much.” Still, Rickey knew there were personalities involved, and that Law had friends in high places. His evaluation adds: “His salary should be reduced back to $5,000 for ’52, but it may be unadvisable because of Senator Walker and particularly Bing Crosby whose final effort secured the player.”

After Rickey’s evaluation, Law left baseball, entering the military for two years. But unlike Wakefield, he wasn’t finished.

Nine years later, the Milwaukee Journal ran an article in which Law’s mother described a long-ago phone call from the famous crooner, then part-owner of the Pirates, in which he had recruited her son for the team. Crosby’s friend, Herman Welker, later a U.S. Senator for Idaho, had seen Law play as a high school senior and had recommended him to Crosby. Thus, his youthful appearance before Rickey all those years ago.

It was a good time to run a piece on Law’s path to the majors.

Two days later, Law was the starting pitcher in Game 1 of the 1960 World Series, facing the powerhouse New York Yankees, who had won the Series eight times in the past 13 seasons. It would become one of the most famous of all the Fall Classics, and Law was a key figure.

Right off the bat, Law gave up a first-inning homer to Roger Maris, the American League MVP, but won the game, 6-4. The Yankees crushed the Pirates the next two games, 16-3 and 10-0. Desperate, the Pirates turned again to Law in Game 4. He turned in another gem, cutting down the powerhouse Yankees, 3-2.

The Pirates won the series with a Game 7, walk-off home run by Bill Mazeroski, one of the legendary moments in MLB history. The Yankees had outscored the Pirates 55-27, but lost the Series — largely because Vern Law, Bing Crosby’s pick, shut them down twice.

Rickey’s reaction, we regret to report, is lost to history.