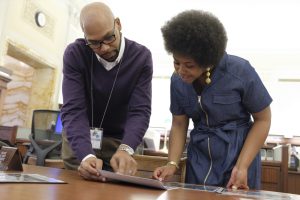 This is a guest post by Bryonna Head, a public affairs assistant in the Communications Office. It is reprinted from the January–February issue of LCM, the Library of Congress Magazine. The issue is available in its entirety online.

The Library’s local history and genealogy resources make it easier for African-Americans to explore their family histories.

In the age of personal genetic testing and online genealogical research, Americans today are more interested than ever in discovering their own genesis, looking for a beginning that explains their now.

This awakening to family history is one the Library of Congress is well equipped to help, including for African-Americans seeking to better understand their roots.

Genealogy is a journey, not a destination. A good place to begin that journey, of course, is interviewing older living relatives, then working backward through vital records, such as census records or birth, death and marriage certificates.

The Library is a starting point for names, dates, photographs and sometimes even addresses of ancestors—as students from Howard University learned this fall when they were invited to the Library for a discover-your-genealogy workshop.

Johnson, who began his own genealogy quest over 10 years ago, knows firsthand how challenging searching through black history can be. “It is more of a journey and not a quick trip,” Johnson said. “But when you find something and you get that ‘aha’ moment, it will be worth the frustrating weeks and seeming dead ends.”

As a case in point, the workshop took participants through the family history of Richard Slaughter, an African-American born into slavery on a plantation in Hampton, Virginia, in 1849. Slaughter’s autobiography was found in the slave narrative project, an initiative conducted by the Depression-era Federal Writers’ Project to gather firsthand accounts of the experiences of former slaves.

Those discoveries started with a name, then a date. Now, one branch of the Slaughter family tree is blossoming with leaves.

Among the students in attendance was 19-year-old Carmen Crusoe, a sophomore Africana studies and political science double major at Howard University. Crusoe’s father is Liberian, born and raised in Monrovia. Her mother is an African-American from Cleveland, where her maternal grandparents moved from Alabama and South Carolina during the Great Migration.

Crusoe is a direct descendant of Joseph Jenkins Roberts, the first president of Liberia. Her genealogy journey may begin at the Library but, as she learned at the workshop, will branch into other avenues, such as record-keeping sources for Liberia.

“In my personal genealogy journey, I hope to find out more about the history of my Liberian people and the rich lineage from which I descend,” Crusoe said. “I hope to reconnect with my Southern roots. I do not know who or what awaits me, but here I come.”

The Library provides resources within its general collection but also via access to genealogy databases available to patrons at no cost. There, Crusoe was able to find her parents’ marriage license and the housing information for relatives she has never met. In-person orientations are held each week in the Main Reading Room, and online orientation videos are available specifically for African-American genealogy research.

Those services and resources help users, like Crusoe, get on the path to personal connections from the past.