The following is a guest post by Helena Zinkham, chief of the Library’s Prints and Photographs Division. It was first published on “Picture This,” the division’s blog.

It’s a remarkable achievement for any social media program to still be going strong after 10 years. But the most important part of the Flickr Commons is the opportunity to talk about pictures without the barriers of time and place.

A fantastic community of people who enjoy looking at old pictures has developed through the comments they exchange online. That communication can be as simple as flagging favorite photos, and a display of top favorites appears in a Flickr album and is also being featured on the Library of Congress home page this month.

Thank you for a rich and growing experience! You inspire the Prints and Photographs Division staff to keep diving deeper into our collections to share the pictures we love. Your subject expertise and impressive research skills also provide much-needed help to identify the many fascinating images that arrived at the Library with only one or two words of description.

New followers and history detectives are always welcome to take part in the Library’s Flickr photostream.

A selection of the Library of Congress Flickr albums.

The albums selected above illustrate how successful “crowd sourcing” has been in adding descriptive information. You’ve sent us views of how places appear today for “then and now” comparisons of changing landscapes and cityscapes. You’ve provided dates for jazz performances. You’ve even identified photos that had no captions at all! More than 12,000 pictures now have improved, corrected and expanded descriptions. Please join us as 50 new photos flow out each week needing detectives to enrich the descriptions.

In 2008, George Oates at Flickr created the Flickr Commons with the Library of Congress and an ambitious vision: “Help us catalog the world’s public photo archives.” Now you have a chance to see images from 115 institutions all over the world—check them out! For example, in the National Library of Ireland’s photostream, delightful conversations develop as a group pieces together the story for each photograph. 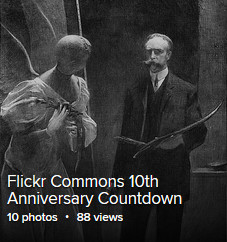 Our Flickr Commons 10th Anniversary Countdown Album began with “The Tenth Muse,” photographed by John White Alexander between 1900 and 1912.