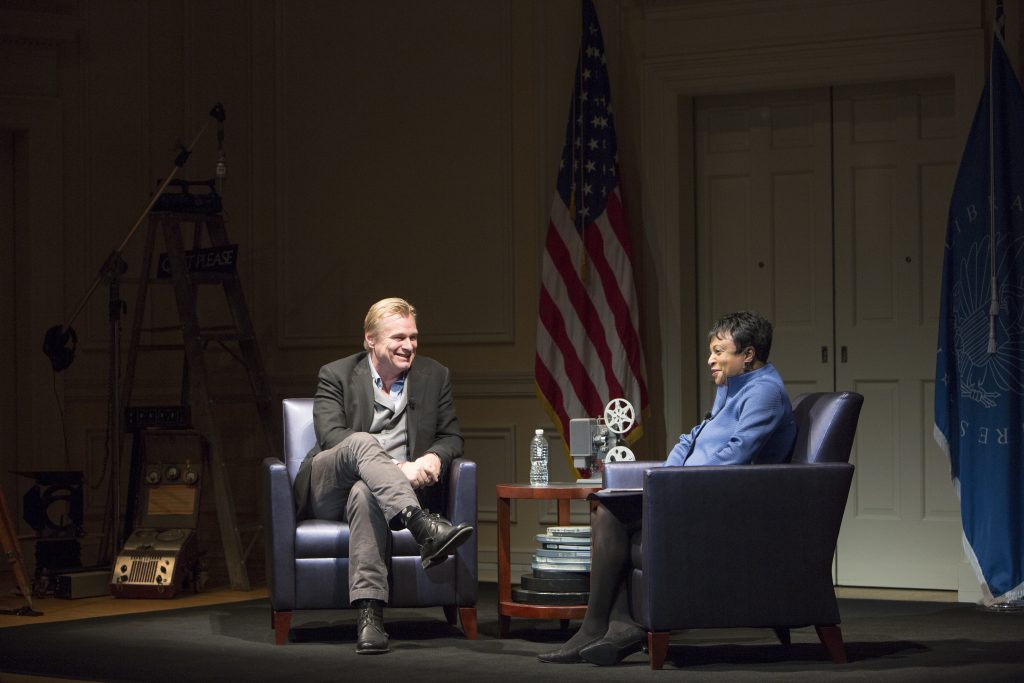 This is a guest post by Mark Hartsell, publications editor in the Communications Office, in advance of the announcement this week of this year’s selection of motion pictures to be added to the National Film Registry. Director Christopher Nolan, the subject of this post, is a member of the National Film Preservation Board, which advises the Librarian of Congress regarding selections to the registry.

Christopher Nolan discusses film preservation with Librarian of Congress Carla Hayden at a November event in the Coolidge Auditorium. Photo by Shawn Miller.

Even in the digital age, films from the silent era still hold the power to inspire and teach today’s moviemakers.

Director Christopher Nolan is one of them. For his film “Dunkirk,” Nolan studied silent films to learn how early directors handled large crowds of extras—lessons he then applied to his epic story of a British Army trapped on a beach by the Germans during World War II.

Such a study, of course, carries an obvious prerequisite: Those silent classics must still exist. Institutions such as the Library of Congress must acquire and preserve those historical prints and make them accessible to the public.

“The value of these prints as physical objects to be preserved . . . is extremely, extremely important,” Nolan told a packed house in the Library’s Coolidge Auditorium last month. “It’s history coming alive right in front of you.”

Nolan made his first feature, “Following,” in 1998, followed by “Memento” and “Insomnia.” Today, he is one of the world’s most acclaimed and successful filmmakers. In addition to “Dunkirk,” Nolan has directed such critically acclaimed hits as “The Dark Knight,” “Interstellar” and “Inception.”

Nolan came to the Library in his capacity as one of 44 members of the National Film Preservation Board, which works with the Library to ensure the survival, conservation and public availability of America’s film heritage. Advising the Librarian of Congress on the annual selection of 25 films for preservation in the registry is one of the board’s duties—and a process that inspires passionate debate among the board members about which films belong. 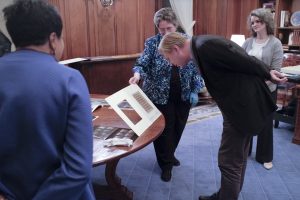 Nolan examines “Edison Kinetoscopic Record of a Sneeze,” a five-second-long motion picture that came to the Library in 1894 when it was registered with the Copyright Office. Because the copyright law did not yet protect motion pictures, it was registered as a series of still photographs. It is the earliest surviving motion picture deposited with a registration. With Nolan are, from left, Librarian of Congress Carla Hayden; Helena Zinkham, chief of the Prints and Photographs Division; and Megan Halsband of the Serial and Government Publications Division. Photo by Shawn Miller.

Library studies have revealed the dire state of preservation of America’s movie-making heritage: About 70 percent of feature-length silent films, for example, have been completely lost over time. To address the problem, Congress in 1988 passed the National Film Preservation Act, establishing the board and the registry.

Preservation, Nolan said, is a complicated issue that’s been made more complicated, not less, by the introduction of digital technology—technology that for years, he said, was expected to take preservation issues off the table.

“We now, of course, know that digital technology is a moving target,” he said. “It improves every year, but it changes its characteristics. What I call the photographic background of the thing is the original elements—the negatives, the IPs [interpositives], the deposit prints. They have to be maintained. They have to be looked after very carefully.”

Preserving those original elements does more than just ensure a film’s survival and availability, as important as those are. It also, he said, preserves the filmmaker’s original intent.

Nolan noted that he’d recently finished transferring his films to DVD, Blu-ray and 4k ultra-high-resolution. Those are great formats for access, he said, but the reality is that each time you transfer a film you are reinterpreting it and creating something new and different.

“There are a lot of filmmakers who are not with us anymore who can’t speak to this issue. I can and do about my own work and how I want to see it, what’s the authoritative version.”

Nolan is one of a diminishing number of directors who still shoot on film rather than digitally, who will leave behind a legacy of movie negatives. Film, he has said, is a reliable technology, proven over a century, and remains cheaper and better-looking than digital.

Those original film negatives, Nolan said, are objects that, when preserved, make history come alive – objects he likened to the items from Library collections he viewed when he visited the Library, including the Batman No. 1 comic book, a Frank Lloyd Wright rendering and boxing photos taken by Kubrick.

“If you’re lucky enough to see the objects I was looking at in the Library, the vibrancy and the life—you feel like you’re there in history,” he said. “It’s like a time machine. You’re right back there because these things are so well preserved.”

A webcast of Nolan’s discussion with the Librarian of Congress will soon be available on the Library’s website.