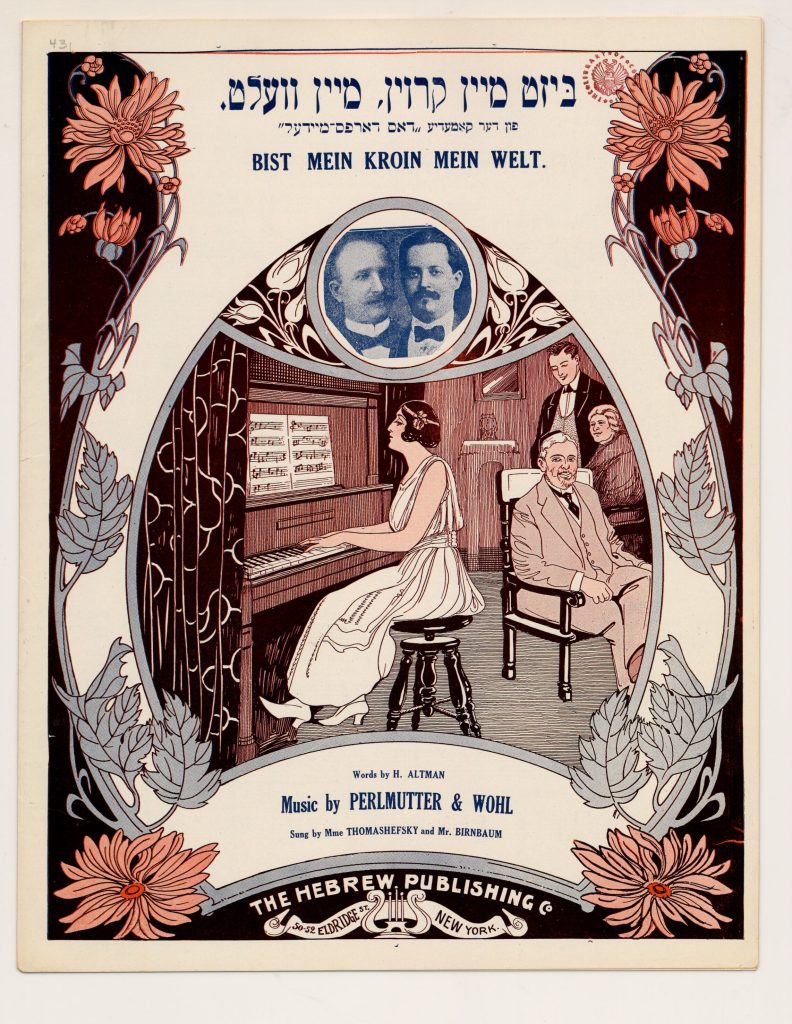 The Library’s collection of Yiddish American sheet music is an unusual one for the Library of Congress, mostly because of the way it came together: It started not with acquisition of materials that were then cataloged, but with a catalog.

Lawrence Marwick retired as head of the Library’s Hebraic Section in 1980. Soon afterward, he set out to compile a list of Yiddish American plays and music the Library of Congress had acquired as deposits with copyright registrations. Because the deposits had not been cataloged, these works were virtually unknown to scholars at the time, and Marwick wanted to rectify that. He started by recording information on some 5,000 index cards. 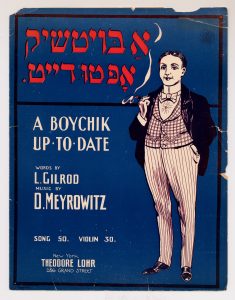 While doing so, he read a story in the New York Times about music historian Irene Heskes and her project to organize a collection of sheet music owned by the Hebrew Publishing Company of New York City. The collection included many Yiddish popular songs performed by stars of the Jewish stage. Marwick wrote to Heskes, and she agreed to meet him in Washington, D.C. Unfortunately, in October 1981, before Heskes could come, Marwick fell ill and died.

But his vision for Yiddish American sheet music acquired through copyright endured thanks to Heskes. She began in 1984 to revise and expand Marwick’s unfinished work, adding composers, arrangers, publishers and other information. Her efforts culminated in Yiddish American Popular Songs, 1895 to 1950: A Catalog Based on the Lawrence Marwick Roster of Copyright Entries, published by the Library of Congress in 1992. Heskes donated sheet music from her Hebrew Publishing Company research to the Library after the book’s publication.

Much of the Library’s Yiddish American Popular Sheet Music Collection has roots in the Yiddish theater. It thrived in the Bowery area of New York City’s Lower East Side from the 1880s into the mid-20th century and expanded into a network of theaters in Jewish communities around the country. The collection also features popular arrangements of folk songs and sacred songs as well as instrumental numbers. Some compositions, most notably those of composer and violinist Abe Schwartz, became standards in the field of klezmer music. 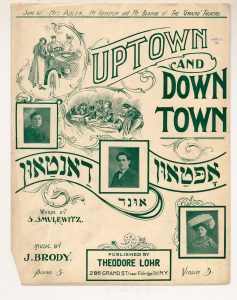 “Uptown and Downtown,” published in 1906 by Theodore Lohr, New York.

Most items in the online presentation of the collection—which includes more than 1,300 items—were scanned from printed copies of sheet music published by companies that specialized in Jewish music. But many are copyright deposits that were submitted to the Library as unpublished manuscripts. These unique items are in many ways the jewels of this collection. Some also exist in published form, but many were never published and appeared publicly for the first time in the online presentation.

The online presentation stops at 1922, because many works published after that year remain under copyright protection in the United States. Researchers can access post-1922 items from the Yiddish American Popular Sheet Music Collection in the Library’s Performing Arts Reading Room.

Lawrence Marwick’s bibliography of more than 1,000 copyrighted Yiddish plays was published separately. A finding aid to the plays is available in the Library’s African and Middle Eastern Reading Room. In addition, 77 unpublished playscripts are available online.