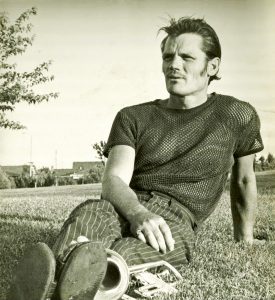 Pam Murrell, a processing technician in the Music Division, posted this the other day on In the Muse. Because we’re Chet fans, we’re posting a slightly adapted version here.

Legendary jazz trumpeter and vocalist Chesney Henry Baker — better known as Chet — died 32 years ago this month in Amsterdam. We pause here just for the length of a solo to remember his passing.

The Library acquired the Chet Baker Materials from the Papers of Diane Vavra in 2015, an intimate cache of 108 items. The majority are photographs featuring Baker, but it also includes deeply personal correspondence with Vavra. They are not yet online, but they will be available when the Library reopens after the COVID-19 closure.

Heralded as the “most gifted trumpeter” by late saxophonist Gerry Mulligan, Baker was a melodic improviser with both his horn and his voice.

The native Oklahoman’s big break came in 1952 after he won the highly coveted spot as Charlie Parker’s trumpeter after an audition. He was just 22. Soon thereafter, he met Mulligan. Along with the other members of their quartet, they pioneered a style of music which critics called West Coast Jazz. The genre’s light rhythms contrasted the hard and heavy drives of its eastern counterpart, making it a musical innovation.

The period of 1953-1960 was the pinnacle of Baker’s popularity. He performed throughout Europe and was invited to tour with jazz luminaries such as Count Basie and Sarah Vaughan. He also was offered roles in domestic and international films, as producers favored his model good looks and irrefutable magnetism which they believed translated well on the big screen. Baker starred in two films (“Hell’s Horizon” in 1955 and “Howlers of the Dock” in 1960) and performed the music for a third (“Fiasco in Milan,”1959).

The frenetic period of the ’60s resulted in a conspicuous vocational lag in Baker’s momentum. National civil unrest manifested in every facet of life, including the realm of music which saw rock gradually push jazz from the main stage. As the decade progressed into the next, the musical landscape continued to shift and become heavily saturated with British pop while simultaneously witnessing the emergence of disco. Consequently, Baker’s professional inertia compelled him to uproot himself from American soil. He headed overseas where jazz was still in vogue and spent the majority of his final decade touring Asia and the European Union. A royalty statement for six months in 1987 documents that he worked in nine countries during that span alone. 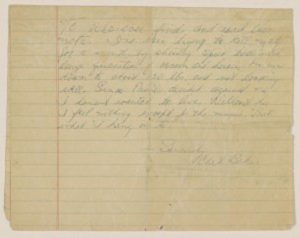 It was during this transitional stage in Baker’s career that he met Diane Vavra. While still looking for work in America, he joined Monday-night jam sessions at a California pizza parlor. One such evening, he spotted Vavra at the drums, barefoot and absorbed in the music. Their attraction was instantaneously mutual. Baker’s love for Vavra endured until the end of his life. Fourteen letters in the musician’s hand are infused with expressions of passion, requests for her presence and numerous apologies. Unfortunately, their tumultuous relationship is also tied to the most macabre object in the collection: a suicidal message on yellow legal paper. In the undated note, Baker confesses that he has attempted to kill himself and cites her rejection as the catalyst. Without her, he concluded, music was all he had left to “hang on to.” Mercifully, Baker relented from his baneful decision.

While abroad in 1979, Baker made 11 records and in the following year he recorded 10. These were some of the most prolific years of Baker’s life since the ’50s. When he did make the rare stateside appearance, it was usually to visit friends and relatives or to perform an irresistible gig, as he did in 1983 when Elvis Costello compensated him generously for a solo in his song “Shipbuilding.” Another enticing opportunity was appearing in a documentary about his life. “Let’s Get Lost” was directed by renowned fashion photographer Bruce Weber and chronicled Baker’s life from his time as a ’50s heartthrob to his nomadic existence in the ’80s. Tragically, he died in Amsterdam at age 59 after a fall from a hotel balcony, four months before the film’s release. A calendar brochure from the nonprofit theater Film Forum advertising Weber’s cinematic tribute to Baker as well as postcards featuring stills from the documentary can be found within the Library’s holdings.

The remaining materials include manuscript correspondence, a contract from Weber and a bilingual poster promoting an exhibit featuring images of Baker at the famed Parisian nightclub New Morning. Additional resources pertaining to Baker are in the Mulligan collection.