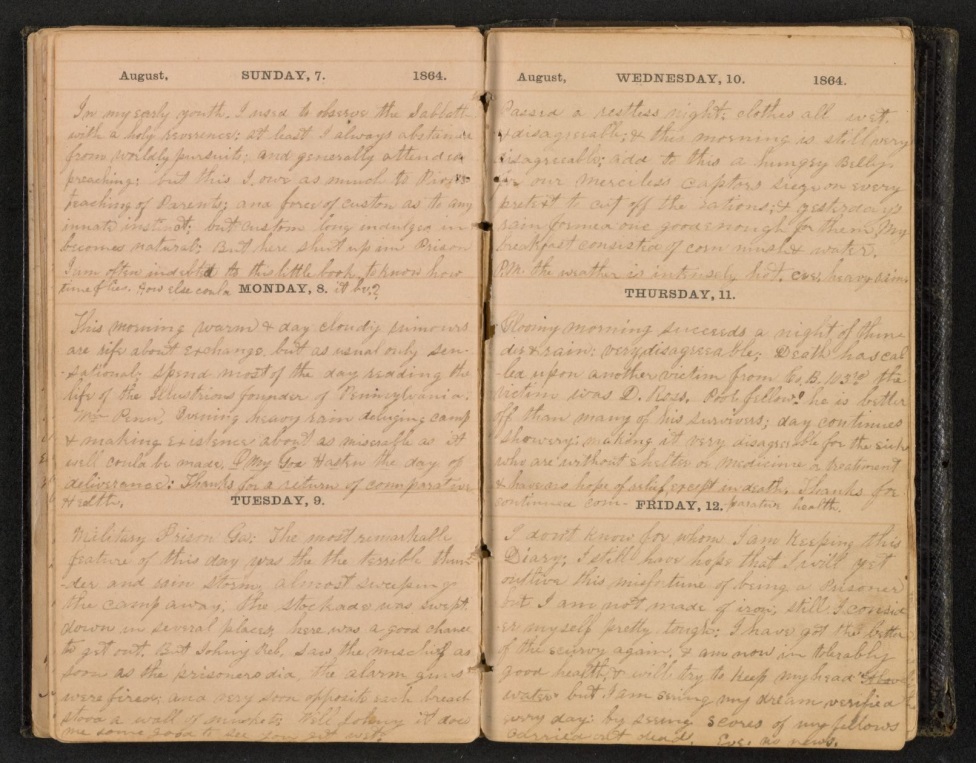 This is a guest post by Michelle Krowl, a historian in the Manuscript Division, about the experience of Samuel J. Gibson, a Union soldier who was incarcerated in the Confederate military prison in Andersonville, Georgia. He arrived on May 3, 1864—153 years ago today—and his diary is now available online.

Entries Samuel J. Gibson wrote in his diary from August 7 through 12, 1864, while he was being held in Andersonville Prison.

“I don’t know for whom I am keeping this Diary,” Corporal Samuel J. Gibson (1833–78) wrote on August 12, 1864. “I still have hope that I will yet outlive this misfortune of being a prisoner but I am not made of iron.” A veteran of Company B, 103rd Pennsylvania Infantry Regiment, Gibson penned these lines while a prisoner at Camp Sumter in Georgia, a Confederate-run prisoner-of-war camp better known by its geographic place name, Andersonville.

Until mid-April 1864, Gibson primarily recorded the weather, his daily routine and observations of camp life in Plymouth, North Carolina. He had decided on January 5 not to re-enlist when his term of service ended and was counting the months until he returned home. On April 18, however, his regiment encountered Confederate forces, and “after a night of terror” the enemy surrounded them. After “a most terrific street fight” on the morning of April 20, Gibson became a prisoner of war and arrived at the military prison in Andersonville, Georgia, on May 3.

On June 12, 1864, Gibson penned a letter to his wife, Rachel, in Pennsylvania. He assured her that while his condition at Andersonville was “by no means a desirable one,” it “might be a great deal worse.(?)” He and his comrades were “in tolerably good health” but suffered “a good deal from the hot weather.” “Give yourself no uneasiness concerning me,” he wrote to allay his wife’s fears. “I can live where any other man can.” 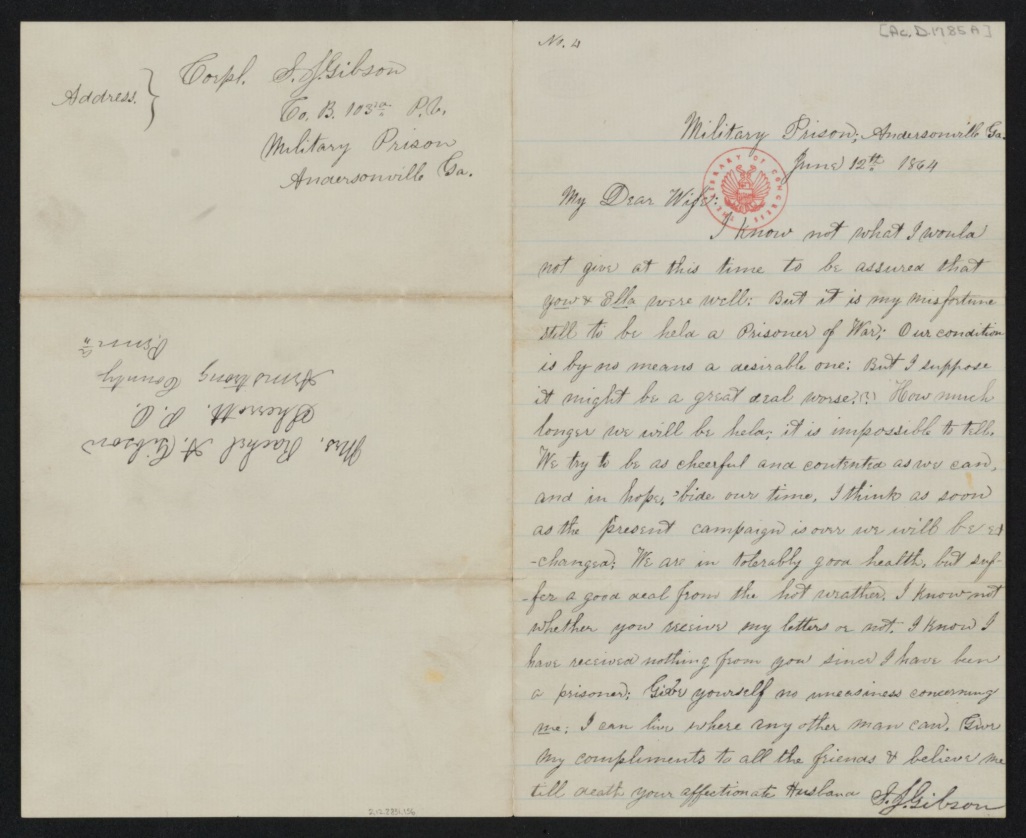 The reality of Gibson’s life at Andersonville was quite different, however. Overcrowding and lack of adequate food, water, shelter, sanitation and medical care made conditions at Andersonville among the worst experienced by prisoners of war on either side and contributed to high mortality rates among the prisoners. On June 9, just three days prior to writing his wife, Gibson stated more pointedly in his diary, “Still in this Hell-upon-earth of a Prison, our condition is daily growing more disagreeable as the weather grows warmer, three out of four of my mess, are sick.” On June 28, Gibson concluded, “If this is not Hell itself, it must be pandemonium; which is only Hell Gate. Heaven forbid I should ever see a worse place.” Gibson recorded the passing of comrades in his diary, sometimes adding bitter recriminations against those responsible for the conditions that led to prisoner deaths. 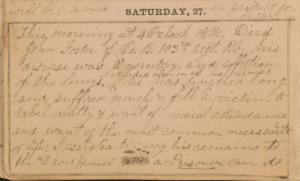 Gibson wrote about the death of a fellow soldier, John Foster, on August 27, 1864.

News still reached prisoners in Andersonville, and Gibson turned his attention to political issues in his diary. He noted on August 29 that the Democratic Party held its presidential nominating convention in Chicago and speculated on the contrast between “their pomp & condition and the condition of the unfortunate inmates of this miserable prison.” On election day on November 8, Gibson recorded that Abraham Lincoln carried a three-to-one margin of victory in an informal election in camp, although he did not specify the candidate for whom he voted.

He left no doubt of his feelings about emancipation, however, and the termination of prisoner exchanges after the Confederates refused to exchange African-American Union prisoners on equal terms. “I hardly know which to despise most, the cruelty & perfidity of the so called Rebel government; or the Miserable Abolition Policy of the gov. of the, U.S. which is causing 50000 freemen to languish & die in Southern jails & Prisons,” he exclaimed on October 16. He continued this thought the following day. “I always regarded Slavery as a great evil; but Abolitionism, as a far greater evil.” Significantly, the words “Abolition” and “Abolitionism” are both crossed out in these entries, and “war” substituted for “Abolitionism.” Whether Gibson altered the diary at the time or when passions had cooled later is not known.

Gibson’s diary also served the vital function of marking time. “Shut up in Prison I am often indebted to this little book, to know how time flies. How else could it be?” he remarked on August 7. Gibson observed that without his diary he would not have known when Sunday arrived each week and would have been unable to observe the Sabbath. “I used to hail the return of sunday & keep it as a day of rest,” he noted on October 30 after being transferred to a prison near Florence, South Carolina, but “in this miserable Prison I would scarcely know the days of the week, were it not for this little Book.”

Gibson’s prayers were answered on December 14 when he discovered he would be among the “Lucky ones” to be paroled. He boarded the federal steamer New York in Charleston, South Carolina, on December 16, grateful to once again be under the “Stars and Stripes.” He reached the parole camp at Annapolis, Maryland, on December 22. Although the cold weather caused more suffering for the “thin & shattered condition” of the recent prisoners, he wrote on December 23, Gibson thought they were all “the most fortunate set of men in the world” that Christmas Eve.

Gibson returned to his family and received his official discharge from the army on March 14, 1865. His heath never entirely recovered from the time he spent at Andersonville, however, and he died at age 45 on December 2, 1878.