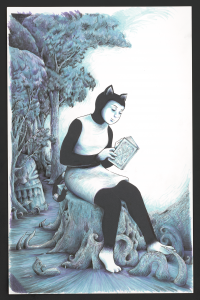 This is a guest post by Megan Halsband, a reference librarian in the Serial and Government Publications Division. It was first published in “Comics! An American History,” the September–October issue of LCM, the Library of Congress Magazine. The issue is available in its entirety online.

Through an agreement with the Small Press Expo, the Library collects and preserves independent comics and cartoon art.

Like Animals? Monsters? Robots? Superheroes? Autobiography? Noir? Science Fiction? History? The Small Press Expo Collection at the Library of Congress probably has a comic (or two) for you.

Small Press Expo executive director Warren Bernard approached the Library in 2010 about establishing a collection to preserve the artistic output of the creators who come to SPX, as well as the history of the yearly SPX festival. This agreement provided a unique opportunity for the Library to collect materials for both its comic book and original art collections.

With as many different subjects and genres as there are artists at the festival, the collection is a fantastic representation of the wide variety of comics and comic books currently being published outside the mainstream press.

Every September since 2011, a number of Library curators attend the festival and seek donations from artists and publishers. Through their generosity, the Library has been able to develop these contemporary and relevant enhancements to its graphic arts and serials collections.

From a few dozen items at the start of the agreement, the collection has grown to several thousand. Material in the SPX collection ranges from tiny accordion-fold pages of doodles and poignant memoirs to oversize newsprint issues and original artwork and posters.

Annually since 1997, the Small Press Expo has awarded the Ignatz Award for outstanding achievement in comics and cartooning. The nominees and winners of the awards in nine categories form a key component of the overall collection. In addition, the collection includes online content—webcomics and the Small Press Expo website itself —which the Library harvested through its web archiving program. The new SPX web archive went live this fall.

The Library also hosts an annual lecture series that has featured artists such as Dean Haspiel and Box Brown, publishers Gary Groth and Locust Moon Press and writer-editor Heidi MacDonald. The lectures, held the Friday before the SPX festival, are open to the public and are archived on the Library’s website.

Scroll down to listen to Dean Haspiel’s 2012 presentation—the first in the series—and Gary Groth’s talk from 2016.