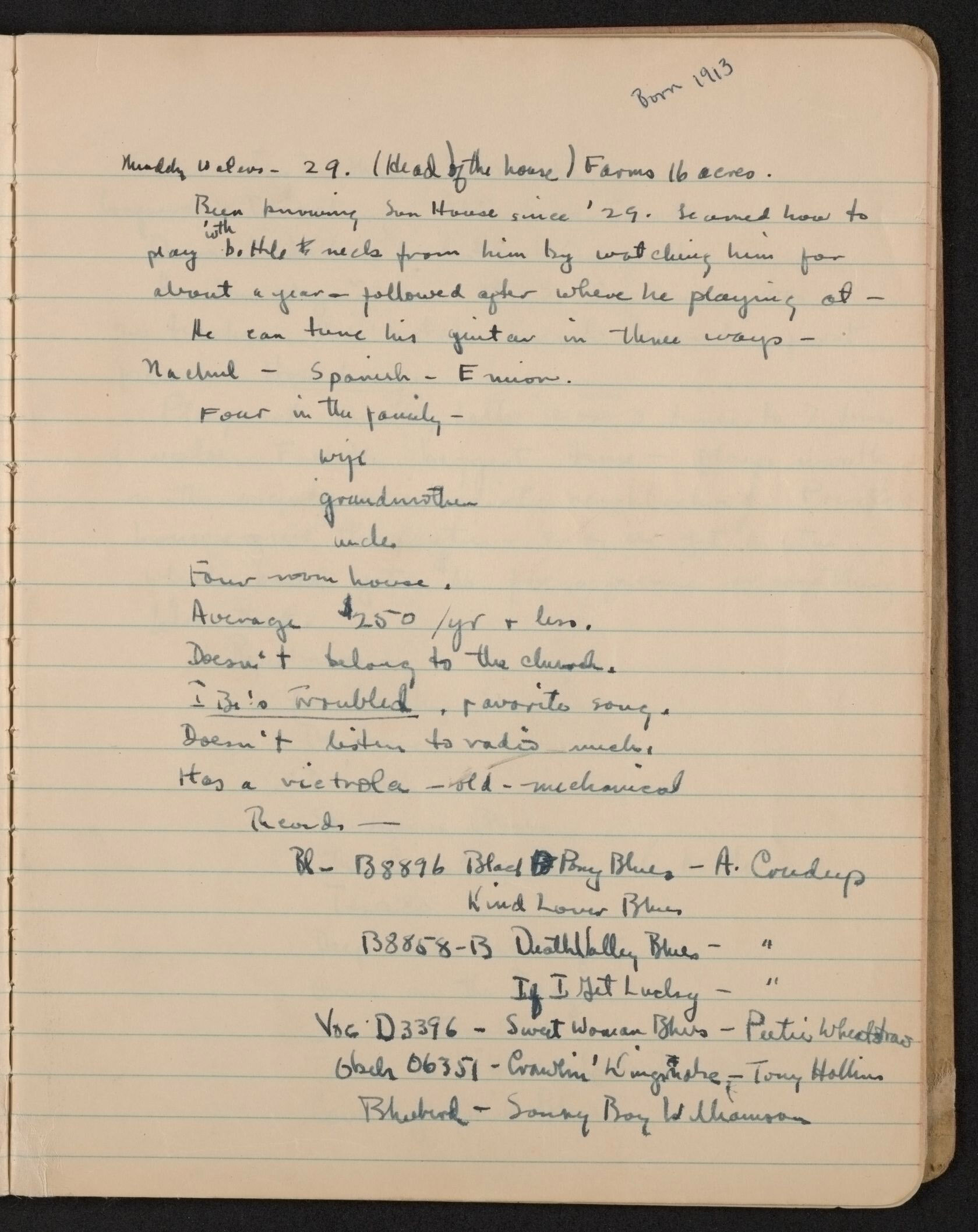 This is a guest post by Todd Harvey and Melanie Zeck of the American Folklife Center.

Muddy Waters – 29. (Head of the house) Farms 16 acres.
Been knowing Son House since ’29. Learned how to
play with bottle neck from him by watching him for
about a year – followed after where he playing at –
He can tune his guitar in three ways –
Nachel – Spanish – E minor

The text above was transcribed from the notebook of Alan Lomax who, as a Library of Congress fieldworker, documented his first encounter with McKinley “Muddy Waters” Morganfield of Stovall, Miss. During this meeting, Lomax and his associate, John W. Work III (of Fisk University), recorded the famous bluesman. Nearly eight decades later, the tape stands stand as a bedrock example of Mississippi blues. But only recently have Lomax’s accompanying field notes and journals become widely available online.

So the AFC is launching “The Man Who Recorded the World: On the Road with Alan Lomax,” a crowdsourcing project on By the People, to enlist help from everyone who’d like to take part. The project features more than 10,000 pages of fieldwork created by Lomax and others during his 30-year career. Lomax recorded thousands of tradition-bearing musicians across the United States, Europe and the Caribbean. All of these papers are currently online as part of the digital Alan Lomax collection. Many of the recordings are online through the Library of Congress, through our partner, the Association for Cultural Equity, or at other websites such as Lomax 1934 (Louisiana recordings), Delta State University (Mississippi recordings), and The Alan Lomax Kentucky Recordings. 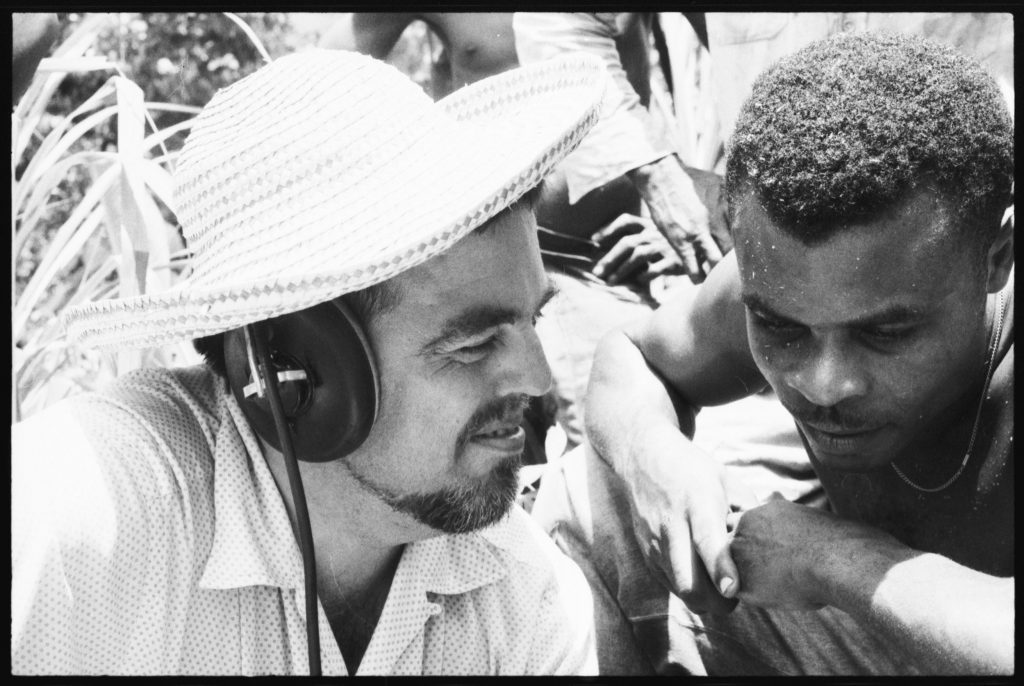 Lomax had a knack for finding the best performers in a given location and coaxing from them epic stories and songs that have remained a part of today’s aural landscape. In the related manuscript material, readers learn about events ranging from the first recordings of Waters to the travails of life on the road, from details of Galician singing style to music-making in 1950s London. The field notebooks provide a unique window into Lomax’s travels, some of which were undertaken in his capacity as a Library staff member. They serve as both a chronological record of professional activities and as his personal journals, thereby revealing interesting information about genres, performers, and locations. By the People also includes song and interview transcriptions that Lomax and his colleagues utilized in publication and for research. Additionally, written correspondence was a necessary aspect of fieldwork for Lomax, whether with the Library or with performers and contacts at his destinations. As a whole, these different types of materials are invaluable for the study of the Lomax family and their collaborators, such as the writer Zora Neale Hurston, and for an understanding of 20th-century American folk music.

“The Man Who Recorded the World: On the Road with Alan Lomax” will present these vital documents in three phases relating to Lomax’s travels and geography. They are:

The first phase will include nearly 6,400 pages from Lomax’s United States and Circum-Caribbean fieldwork. Although much of the work focuses on the African Diaspora, some trips document immigrant groups from Europe. These include materials in Finnish, French, and Gaelic.

Here are a few examples:

Haiti, 1936–1937
From December 1936 through April 1937, Alan and Elizabeth Lomax recorded the songs and religious ceremonies of Haiti, while occasionally bumping into Hurston and other ethnographers. The notebooks compiled by Lomax are filled with vivid descriptions of expressive culture on that island nation and include long narratives about Vodou practices.

Michigan, Wisconsin, Illinois, 1938
In 1938, the Library dispatched Lomax to conduct a folklife survey of the Great Lakes region. He traveled in a 1935 Plymouth sedan, toting a Presto instantaneous disc recorder and a movie camera. By the time he returned three months later, Lomax had driven thousands of miles on barely paved roads. He had a cache of 250 discs, eight reels of film and countless field documents. These attest to the region’s ethnic diversity (including notes written by a Finnish speaker in Michigan’s Upper Peninsula), expressive traditions, and occupational folklife.

New York City, 1950s
Lomax had a relationship with the great bluesman Huddie “Lead Belly” Ledbetter that began in 1933 when Alan and his father, John A. Lomax Sr., first made recordings together. The Lomaxes attended Ledbetter’s wedding to Martha Promise in Wilton, Conn. In the 1950s, after Ledbetter’s death, Lomax conducted an audio interview with Promise. The transcript provides a unique perspective of their relationship.

West Indies, 1962
In 1962, the pan-Caribbean political movement stirred Lomax, Antoinette Marchand Lomax and Anna Lomax to document the music and dance genres of the West Indies. They found similarities that were detailed in the books “Folk Song Style and Culture” and “Brown Girl in the Ring.” The notebooks compiled during this trip contain careful transcriptions of the creolized French spoken on many of the islands.