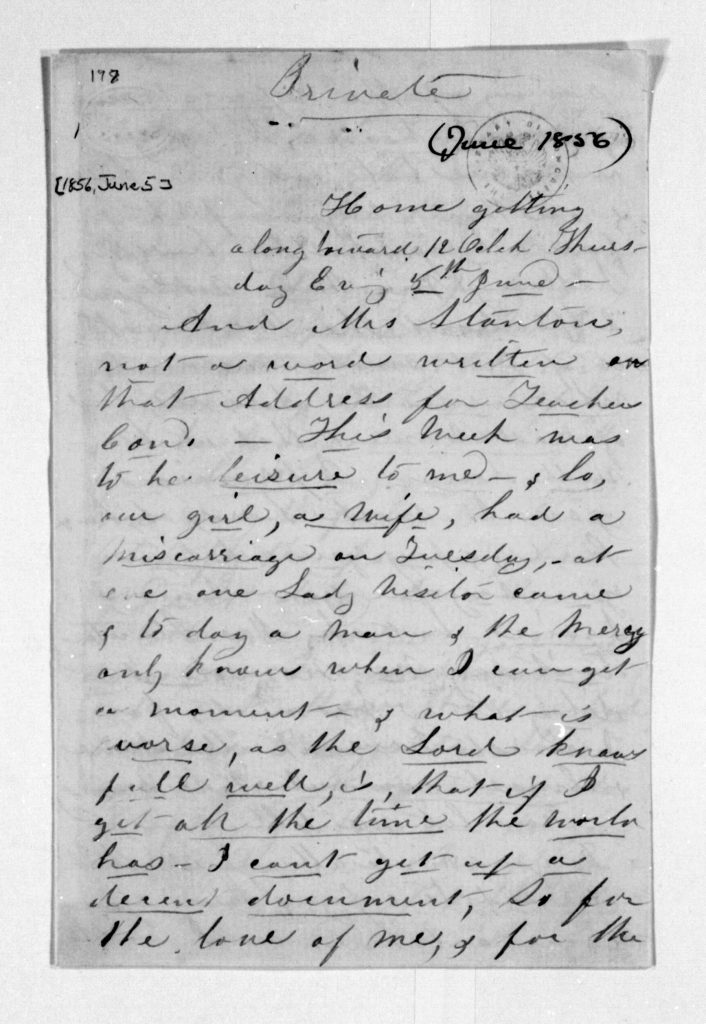 By the People, the Library’s crowdsourcing transcription project, is calling on volunteers to complete 1,000 pages from the “Suffrage: Women Fight for the Vote” campaign before Monday, August 19th. The speeches, diaries, and letters of suffragists reveal complex personalities and a multifaceted movement. Here, Elizabeth A. Novara, a historian in the Library’s Manuscript Division, writes about some of the family and personal relationships that sustained the fight for the vote for over seven decades.

On June 5, 1856, Susan B. Anthony struggled to write a speech on women’s equal education. Who could she turn to but her friend and fellow women’s rights advocate, Elizabeth Cady Stanton?

“I can’t get up a decent document,” Anthony wrote, “so for the love of me, & for the saving of the reputation of womanhood, I beg you with one baby on your knee & another at your feet & four boys whistling buzzing hallooing Ma Ma set your self about the work – it is of but small moment who writes the Address, but of vast moment that it be well done.” 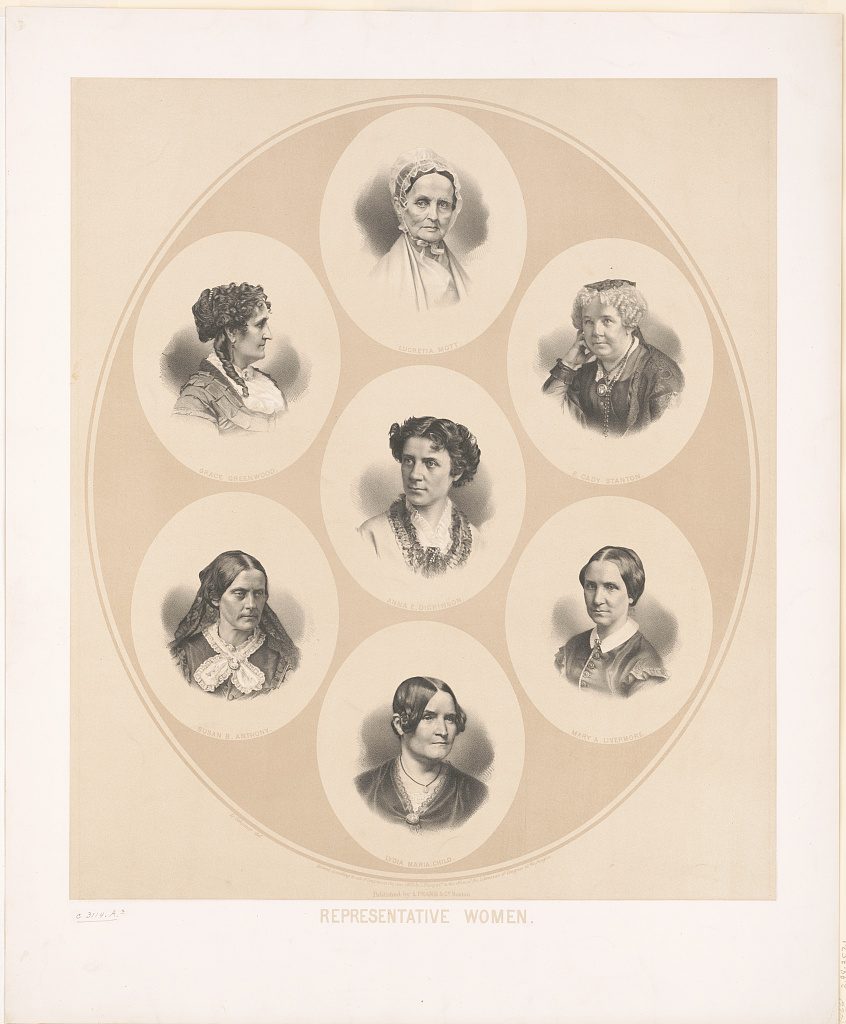 Five days after receiving Anthony’s letter, Stanton replied, “Your servant is not dead but liveth. Imagine me, day in and day out, watching, bathing, nursing and promenading the precious contents of a little crib in the corner of my room….Come here and I will do what I can to help you with your address, if you will hold the baby and make the puddings….Now that I have two daughters, I feel fresh strength to work for women. It is not in vain that in myself I feel all the wearisome care to which woman even in her best estate is subject.”

These letters not only reveal Stanton’s and Anthony’s complementary relationship—Anthony was the celebrated orator and Stanton the superior writer—but also Stanton’s role as a housewife and mother, which limited her ability to participate in suffrage activities during her child-rearing years. Anthony, who neither married nor had children, was free to travel and lecture throughout the country. Stanton, however, would remain a force in the women’s rights movement, serving as a national leader through the end of the 19th century.

Of her seven children, the baby on Stanton’s knee would grow up to be Harriot Stanton Blatch (1856-1940). She followed in her mother’s footsteps, becoming a suffrage leader in England and in the United States. Blatch’s ideas diverged from her mother’s in that she believed strongly that working-class women needed the vote more so than elite white women. Still, she worked to preserve her mother’s legacy. Harriot’s own daughter, Nora Stanton Blatch Barney (1883-1971) was the first American woman to earn a civil engineering degree and, like her mother and grandmother, was active in the suffrage movement. 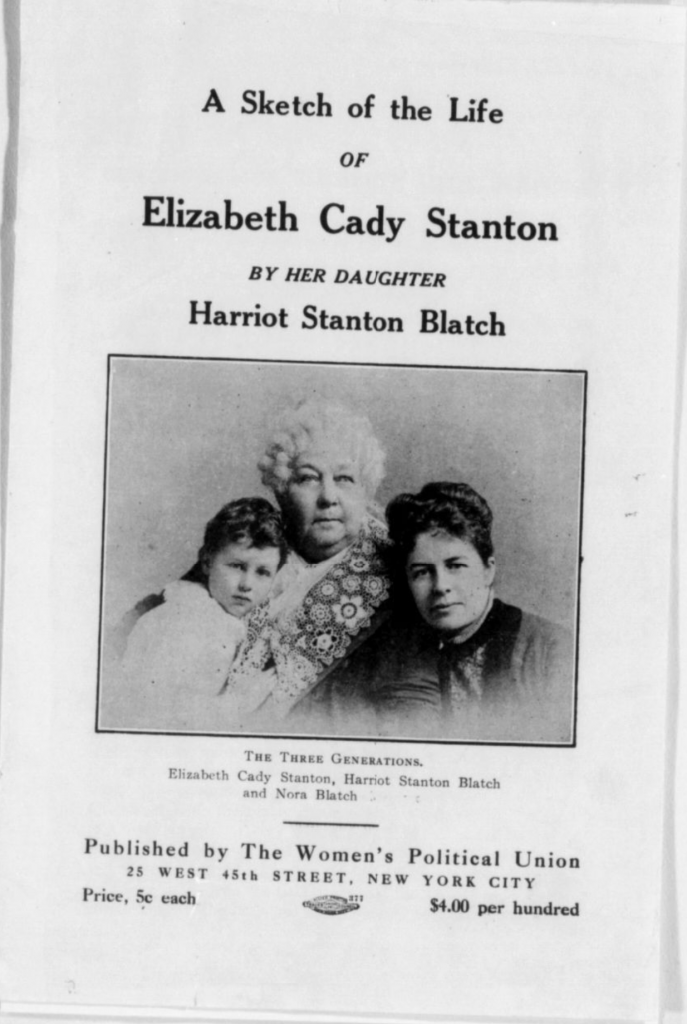 Few women who began the suffrage movement before the American Civil War, including Stanton and Anthony, lived to see the fruits of their labors with the passage of the 19th Amendment, which gave many women the right to vote in 1920. However, their work was carried on by a new generation of women whom they inspired and taught. By transcribing the letters, diaries, speeches and other documents in the Suffrage Topic on “By the People,” you can discover more about the family and personal relationships that sustained the suffrage movement and the intergenerational story of the women, their daughters, granddaughters, and protégées, who took up the fight for the vote.