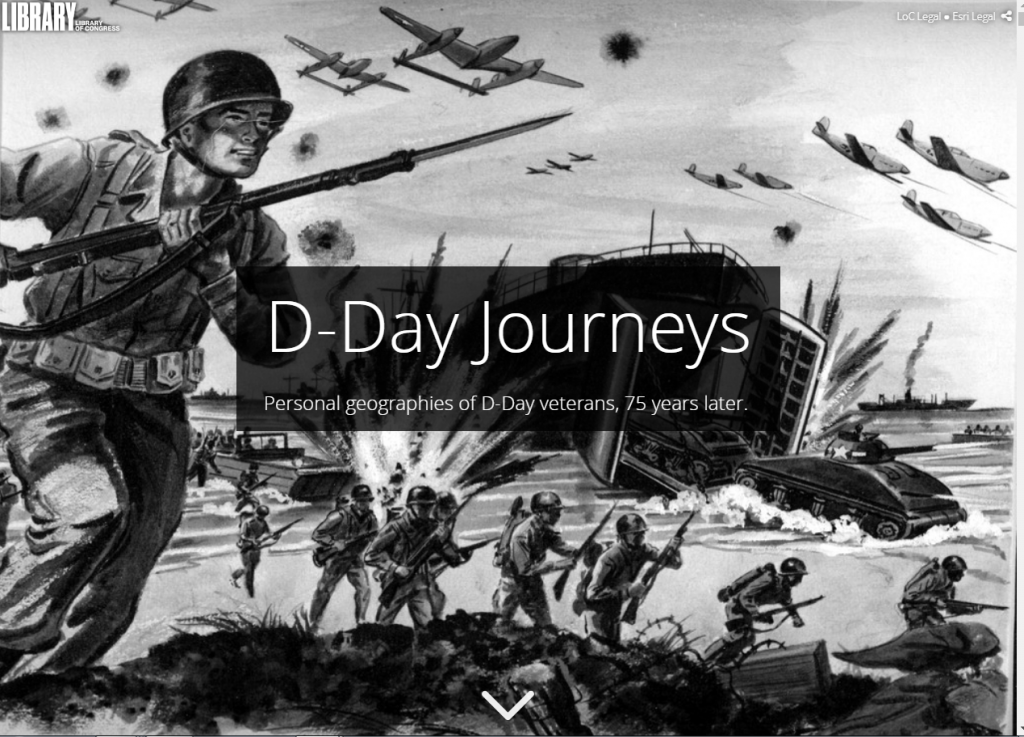 This is a guest post by Sam Meier, a Library technician, who writes about the curatorial and archival work that went into the Veterans History Project’s “D-Day Journeys” Story Map.

In early May, the Veterans History Project released a Story Map titled “D-Day Journeys” which charts the course of four D-Day veterans before, during, and after June 6, 1944.

This Story Map began to take root in late fall of 2018, when Megan Harris, VHP’s Senior Reference Specialist, and I began reviewing VHP collections for potential inclusion in VHP’s new Experiencing War online exhibit in remembrance of D-Day. The wealth of visual materials in these collections sparked our interest in exploring the curatorial possibilities of the Story Map platform. We knew from our Story Maps training that the Cascade template would allow us to display photographs, artwork, and other visual materials in all their full-screen glory.

While VHP had previously participated in a Story Maps pilot project, the 75th anniversary of D-Day presented our first opportunity to create a Story Map which featured multiple stories from VHP’s collections. At first, we contemplated simply retooling a previous Experiencing War online exhibit to fit within the Story Map template. After some experimentation with various drafts and narrative approaches, it soon became clear that the interpretative possibilities of a Story Map were wholly different from our traditional online exhibits. 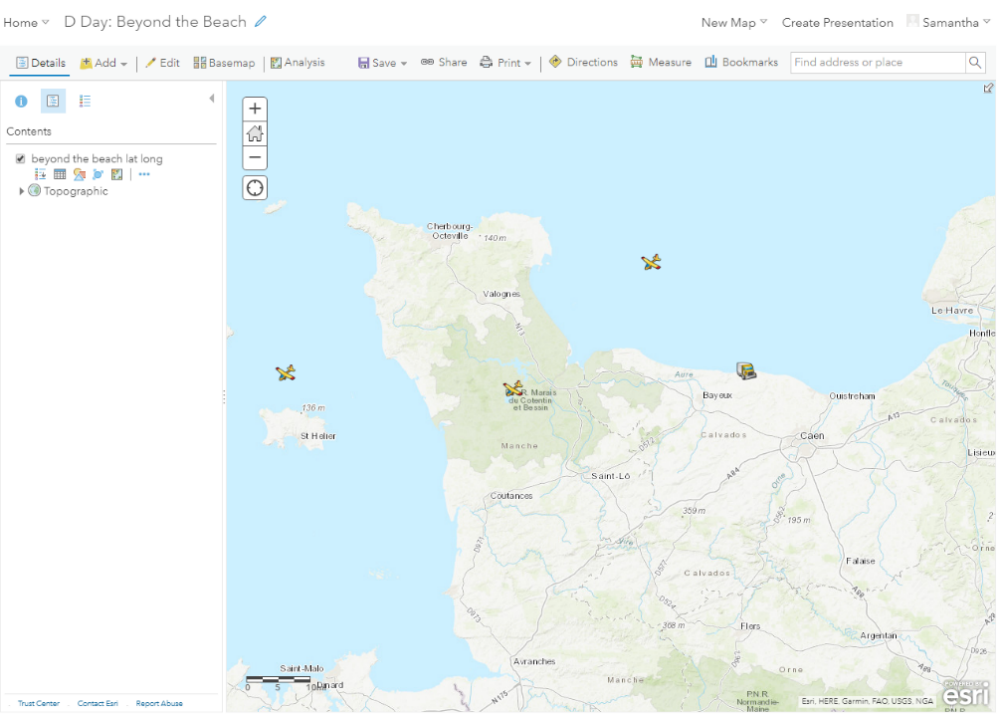 After reviewing other Story Maps produced here at the Library of Congress, Megan had a flash of insight. Though we had both initially been drawn to the Cascade template for its lush presentation of visual materials, Megan realized that VHP collections are uniquely suited to digital storytelling in a map-based discovery environment. Story Maps allow users to learn new information about a subject spatially by engaging with interactive maps. What if we took advantage of this tool by mapping the service histories of individual veterans?

With Story Maps, we could show users where the veterans of D-Day had been instead of merely telling them. Rather than re-tread the sandy beaches of Normandy, France, we could situate the historic events of June 6, 1944 within the individual lives of the men who came ashore that day. We could map their journeys from basic training to the end of the war.

Our initial goal for these “journey maps” were modest. We hoped to identify mappable locations for a few key events in each veteran’s military service: where they underwent military training, or another stateside service-related location; where they were on D-Day itself; and where they found themselves at the end of the war, or any time before they left the military.

Next, we had to select four veterans to be featured in the Story Map. We scoured our holdings to find collections from veterans who had participated in D-Day. With hundreds of possibilities to choose from, we focused on selecting collections which contained ample visual material and compelling narratives.

We also needed the items in these veterans’ collections to contain rich location data, so that we could “pin” the veterans to a map. While some materials, such as diaries, often contained a great wealth of location data, other formats, such as oral histories, did not. This same disparity existed in the donor-submitted description about the collection materials. For example, while some donors provided locations and dates for their individual photographs, others did not.

Finally, we wanted our Story Map to include a variety of perspectives on the events of D-Day. We searched for veterans who served in different branches and in different roles, whose stories could tell us what it felt like to be on the beach, in the air, and out at sea.

As I started mining these collections for location data to create their corresponding “journey maps,” I found far more data than I had expected to find. Bagent’s letters to his wife mentioned many of the cities through which he traveled in Europe. Horr’s pilot’s log book contained location information for every training flight he took, starting September 26, 1942. Cameron, like so many other veterans, defied military regulations by routinely noting his location in his secret diary. And Boehne’s military papers filled in many specific geographic details that he omitted in his oral history interview. My “journey maps” ballooned from three or four data points per veteran up to 30 or 40 apiece.

Armed with all this data, I was ready to create detailed maps for our four veterans. But Megan and I still needed a way to ensure that readers could follow each veteran’s story. How could we structure our Story Map so people didn’t get lost in the details?

Luckily, I had an epiphany of my own. Long before coming to the Library, I worked as an editor and a writer for a digital media outlet. That experience informed my next idea. What if we thought of our Story Map as being less like an online exhibit, and more like multi-media journalism? We could give people options as to how they wanted to navigate the Story Map, letting them engage with the content in ways that made sense to them. 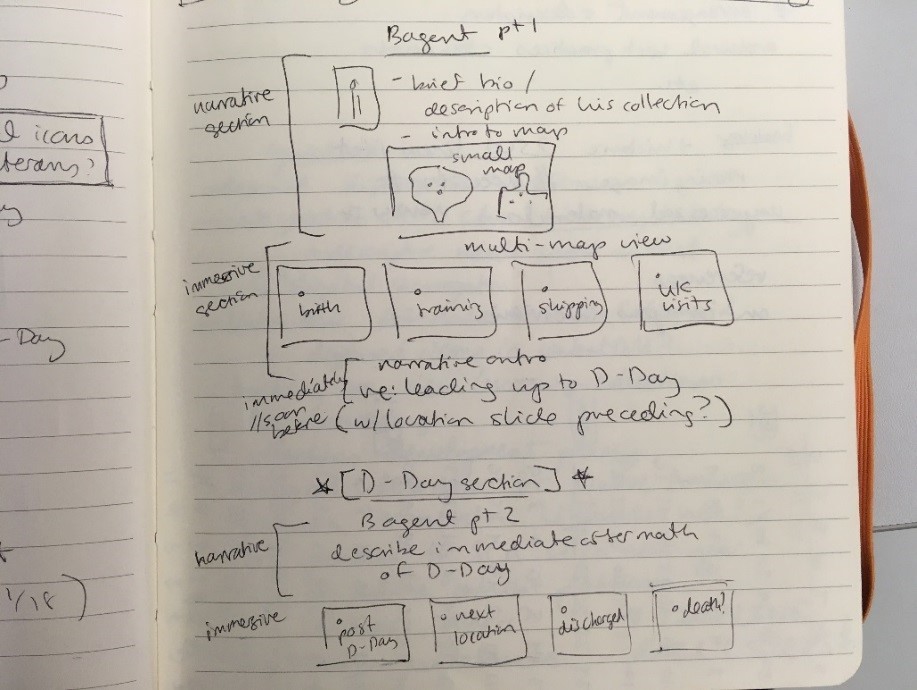 My process notes illustrating how I could structure the D-Day Story Map. January 2019. Photograph by Samantha Meier.

I came up with a “choose-your-own-adventure” narrative structure which broke each of the three major sections of the Story Map—Before D-Day, On D-Day, and After D-Day—into sub-sections about each veteran’s experience. With a special assist from Tim St. Onge and Mike Bijou of the Library’s Geography & Map Division, we were able to create chapter links within the Cascade template. Now users could choose for themselves how these stories of D-Day would unfold.

As a researcher, I wanted our Story Map to show how rich VHP’s collections are for historical research. The platform allowed me to show my work by hyperlinking to primary source material in map pop-ups as well as in each veteran’s narrative. I embedded digital images of correspondence, diary entries, and other archival documents throughout the Story Map to show users how I knew what I knew about Bagent, Horr, Cameron, and Boehne. 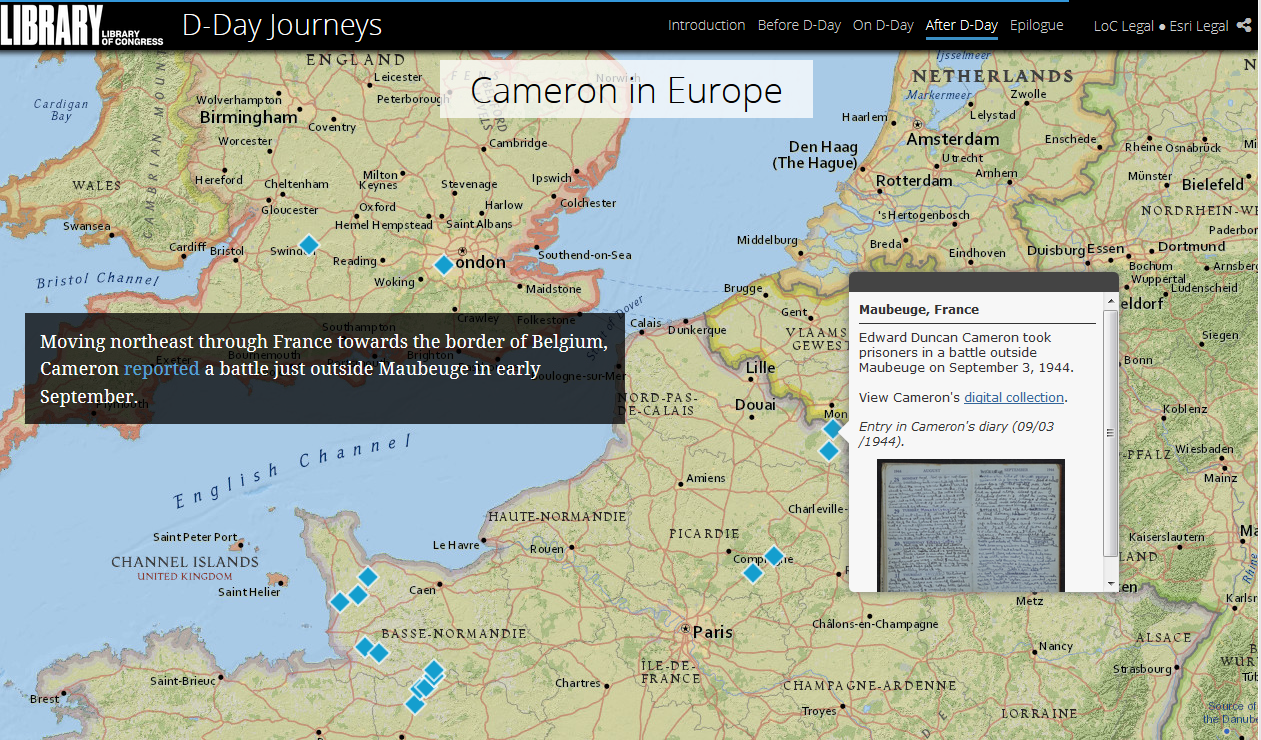 Of course, there were plenty of details that I didn’t know about what these four men did during the war. To fill in some of these gaps, I turned to other VHP collections. I leveraged the “Service Unit/Ship” field of VHP’s online database to find other veterans who belonged to the same service units as our four veterans.

These related collections provided me with new contextual information for Bagent, Horr, Cameron, and Boehne’s personal experiences. Reviewing the collections of men who served in the 149th Engineer Combat Battalion, I realized that the “Ray Kimm” mentioned in an October 1945 letter by Preston Bagent was none other than Raymond Calvin Kimm. The information provided in Kimm’s VHP collection helped me confirm key details of Bagent’s military service.

The biggest shock of all came when I realized that Bob Horr’s best friend “Buck Jackson” was not killed on D-Day, as Horr’s pilot’s log suggested. Though this discovery was surprising, one of the wonderful things about VHP’s vast archive of 100,000+ collections is that these kinds of connections are continually possible, waiting to be made by researchers.

In addition to discovering previously unknown connections between VHP collections, I also uncovered new information by intently scrutinizing Bagent, Horr, Cameron and Boehne’s own collection materials. Carefully poring over Bill Boehne’s scrapbook, I found photographs that had been literally hidden inside its pages. Duncan Cameron’s diary turned out to contain entries not only from 1944, as its cover suggests, but also entries from 1943 when Cameron was stationed in North Africa and Sicily.

Megan and I conceptualized the “On D-Day” section of our Story Map as its narrative center. June 6, 1944, was the day which united our four veterans in time and space. But they were far from the only men who participated in the invasion of Normandy that day. I wanted to make sure that the other stories of D-Day veterans in VHP’s collections were included in some way. I extended the potential for map-based discovery to include a map which would allow users to discover as many D-Day collections within VHP as possible.

As the “D-Day Journeys” Story Map notes, VHP has over 2,500 unique collections from veterans who participated in Operation Overlord, which began June 6, 1944, and ended on August 30, 1944. All of those collections are categorized as “Operation Overlord (D-Day Normandy Invasion)” in the “Battles/Campaigns” field of our database. This category includes both D-Day veterans AND veterans who did not participate in D-Day, but, rather, in the broader campaign.

To get an accurate list of the veterans in our collections who participated in D-Day, I spent over 60 hours reviewing donor-provided descriptions for over 1,500 unique collections. I checked to see whether they mentioned participating in the Normandy invasion on D-Day specifically, versus days to weeks after June 6, 1944, and where in France they said they were on that day. For most of these collections, there simply wasn’t enough data available to determine whether the veteran took part in D-Day, or their location that day. I was able to create data points for 238 veterans, but I suspect that VHP has hundreds more D-Day stories that I was not able to represent in our map.

Visualizing these 238 collections in a single map presented other problems. I wanted to both show trends within these collections and allow the user to access the stories of individual collection through the map. But a map with 238 data points was very difficult to interpret. 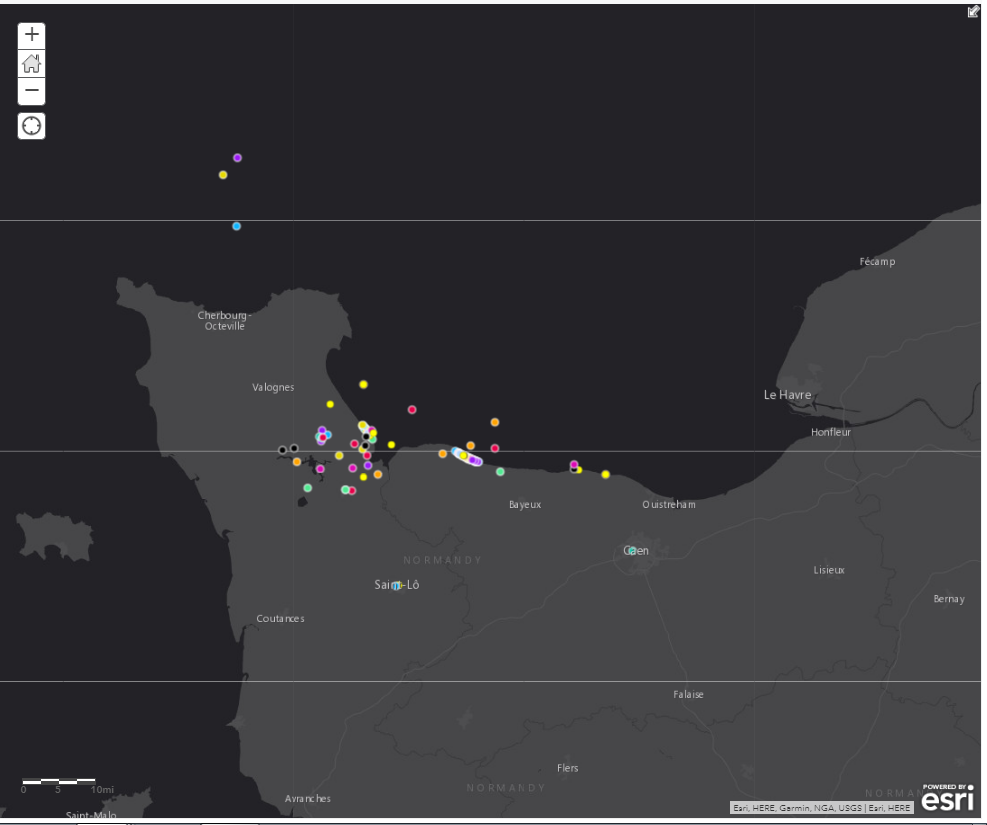 Screenshot showing all the data points for the “On D-Day” map. From “D-Day Journeys,” Story Map created by Samantha Meier and Megan Harris, Veterans History Project, 2019.

Luckily, a GIS expert stepped in to save the day. Tim St. Onge, who had previously assisted us with the chapter links, suggested that we use the “Cluster Points” tool in Story Maps to improve the map’s legibility. Tim’s support was instrumental to our Story Maps project. He advised us on everything from filtering data points to creating transitional map scenes to developing more readable maps.

Thanks to his help, the final version of my “On D-Day” map not only shows our users the “hot spots” where most VHP veterans landed—namely, Omaha Beach, followed by Utah Beach—but also allows users to drill down to individual D-Day collections if they wish to do so. 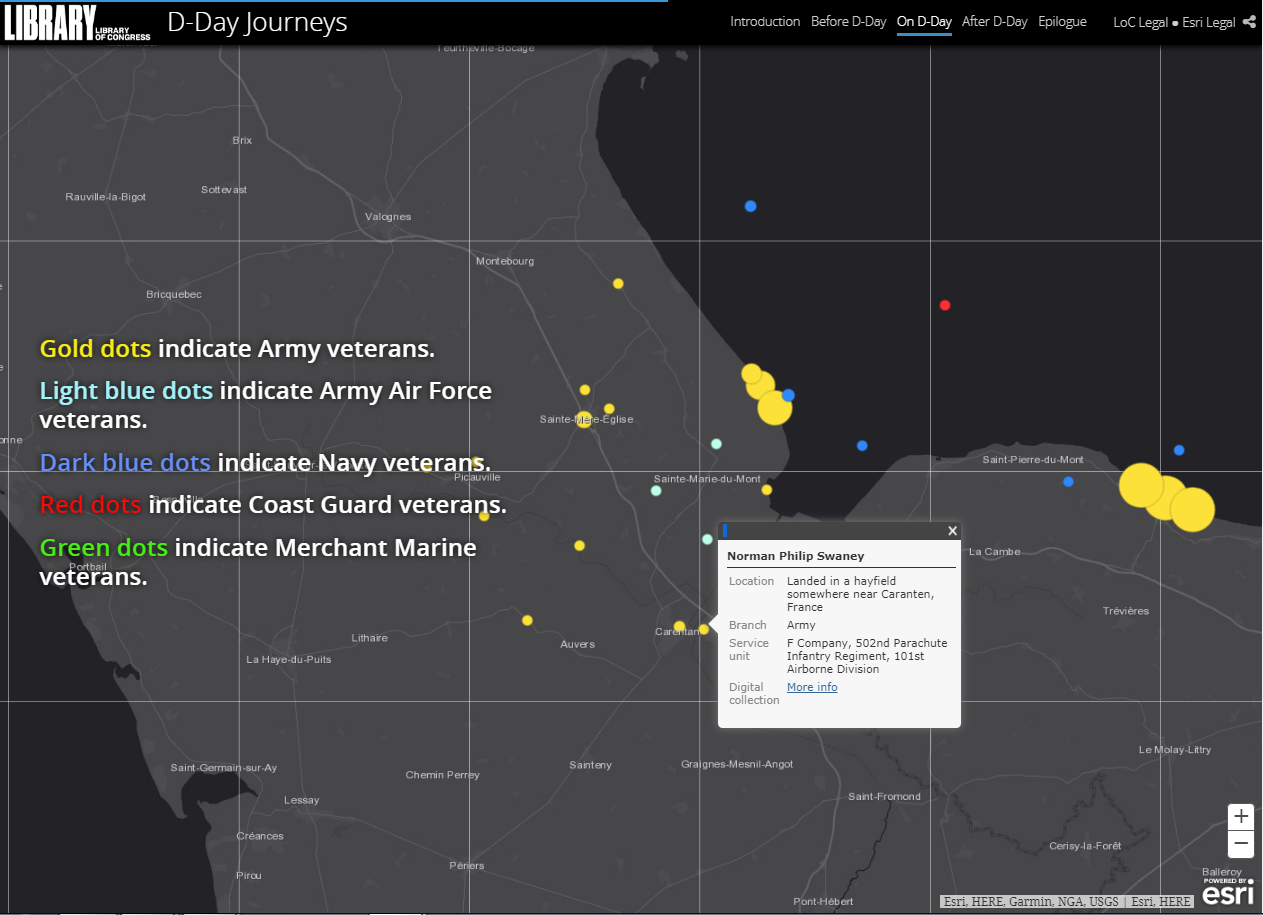 In addition to connecting us with colleagues elsewhere in the Library, working on “D-Day Journeys” also engaged us with other divisions’ materials. I paid Tim’s colleagues a visit and traveled to the Geography and Map Reading Room to scan an American Red Cross map of London that VHP had previously transferred to that division from our collections. Megan and I sojourned to the Newspaper & Current Periodicals Reading Room to examine microfilmed obituaries for Bagent and Cameron. We utilized historic photographs and artwork from Prints and Photographs in our Story Map, consulting with them specifically regarding the use of Tracy A. Sugarman’s drawings. (Though his World War II-era artwork is held by Prints and Photographs, Sugarman also has a VHP collection.)

“D-Day Journeys” was unveiled to the world on Friday, May 10. After four months spent working on our Story Map, I not only knew Bagent, Horr, Cameron, and Boehne’s stories inside and out, but I had also learned far more about D-Day. While I cannot ever fully understand these veterans’ experiences during World War II, Story Map brings their records of those experiences—be they letters, log book entries, photographs, poems, or drawings—to life. “D-Day Journeys” demonstrates the richness of VHP’s collections. It visualizes the vast amount of information held within this participatory, community-driven veterans’ archive. It demonstrates how personal record-keeping can be, and how profound.

As Boehne inscribed in his scrapbook, quoting John Steinbeck,

“After the bare requisites to living and reproducing, man wants most to leave some record of himself, a proof, perhaps, that he has really existed. He leaves his proof on wood, on stone, or on the lives of other people.”