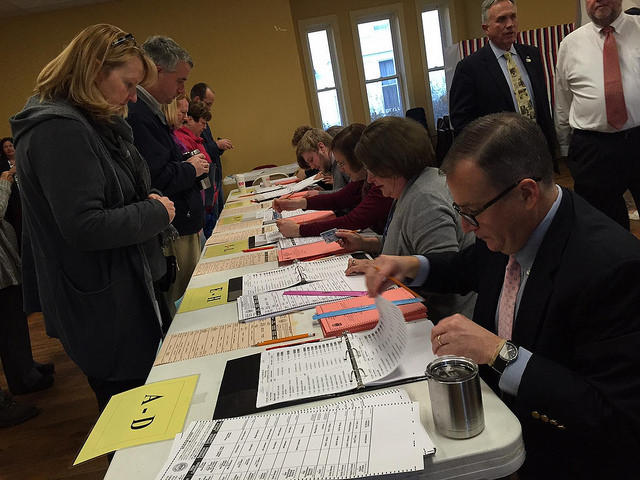 As N.H. Deputy Secretary of State David Scanlan explained on The Exchange, the voter information requested by the Commission on Election Integrity is already publicly available and has been for about ten years — though there are laws governing who gets access to that voter information, as well as how it is accessed and used. For election-law attorney Paul Twomey, the Commission’s request, in addition to being politically suspect, does not fall within that legal framework and could lead to major security risks.

Both Scanlan and N.H. Secretary of State Bill Gardner have seemed somewhat taken aback by the uproar over the Commission’s request. Scanlan places some of the blame on a polarized political climate. Since our conversation, as NHPR’s Casey McDermott reports here, the ACLU has joined with two N.H. lawmakers in suing Gardner over his plans to comply with the Trump Administration’s request for voter information.

Scanlan: There is a distinction in terms of what’s available to a political committee versus what’s available to the average person. An average person can’t get a copy of it; you can go and view it at a central location in the state archives building. Or you can go town by town and aggregate those individual copies… Part of the concern raised is whether this committee is getting preferential treatment.

The voter check list is kind of a living document that shows who qualified voters are in any particular voting district. It really is a right for any voter any citizen in New Hampshire to be able to see who is actually participating in their elections. — David Scanlan, N.H. Deputy Secretary of State.

Under the Help America Vote Act of 2002, every state would create a centralized statewide voter database. We had to take all of the town checklists and put them into a uniform set of data and create a list from all of that info. Congress required New Hampshire to continue to collect the info: the name, the address of the voter, party affiliation. New Hampshire received about $17 million to create the database.

What information is already publicly available in New Hampshire?

Scanlan: Public information is the name of the voter, the voter’s party affiliation — if any — their physical address, their mailing address, and voter history (meaning when and if they voted, not whom they voted for). Different states have different laws on what information is public and private.

What are the objections?

Twomey: The information isn’t just available — it’s available to different types of entities in different forms. The towns can give the public information to anyone who comes around one-by-one to the towns or wards. But the towns can decide the type of access – whether it’s digital or on paper.

If somebody wants the whole thing at once, the Secretary of State can make it available at the archive. But the statute says they can’t copy it; they can’t photograph it; they can’t transmit it in any…