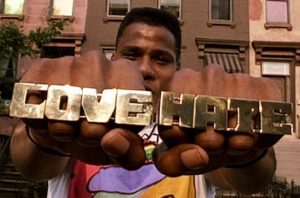 In 1999, Spike Lee’s powerful “Do the Right Thing” made the list with this still-timely film in its first year of eligibility. In an essay on the film, author David Sterritt said:

Spike Lee’s most fully realized film, “Do the Right Thing,” is urban and American down to its bones. This helps explain why reaction to it was so mixed at the Cannes International Film Festival, where I saw its world premiere in 1989 with an audience of international critics and journalists. Spectators applauded at the end, but their clapping seemed driven more by duty than enthusiasm, as if it were de rigueur to cheer a maverick movie by a spunky black filmmaker even if his message seemed cranky or cryptic. Europeans wondered if its subject was timely—racial unrest is “very 1960s,” a West German critic told me—and some Americans criticized it for stirring up discontents that seemed, well, unnecessary in the late 1980s.

Read the remainder of the “Do the Right Thing” essay (PDF).

Trivia: As of this writing, Spike Lee has two other films currently on the Registry, “Malcolm X” and the documentary “Three Little Girls.”

Subscribe to the See Here Now! blog and read about another great film every day up until Library of Congress Carla Hayden announces the 30th anniversary National Film Registry selections on December 12, 2018.