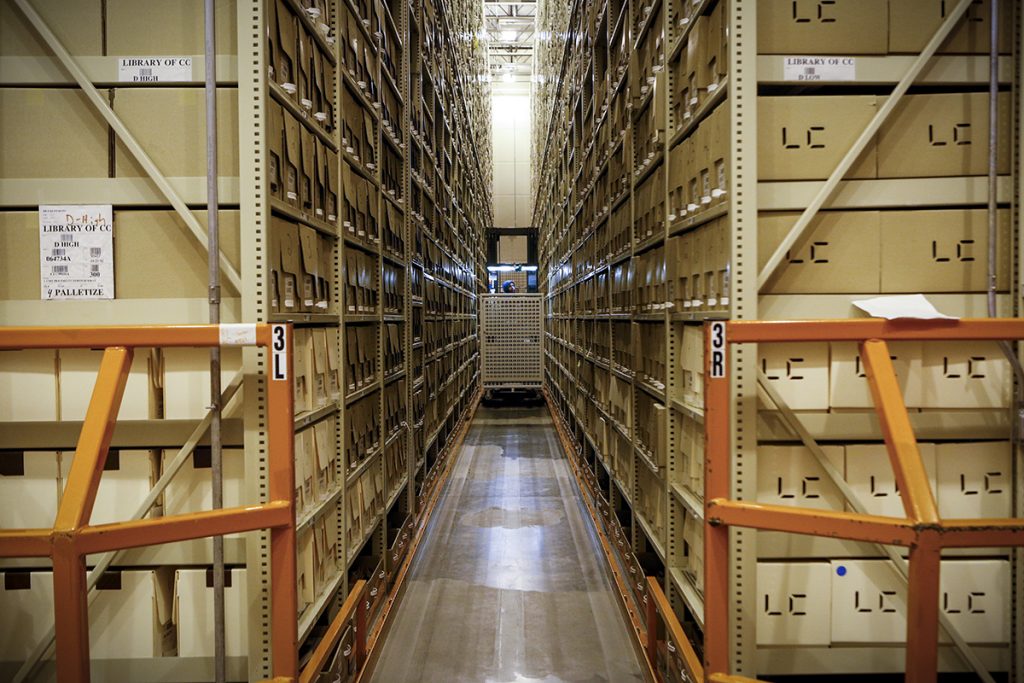 (The following is an article by Jennifer Gavin from the May/June 2017 issue of LCM, the Library of Congress Magazine. Gavin is senior public affairs specialist in the Library’s Office of Communications. Read the entire May/June issue here.)

Thirty-foot-tall shelving units in one of the Library’s storage modules in Fort Meade, Maryland. Photo by Shawn Miller.

The phrase “form follows function,” long associated with the design movement, isn’t a bad starting place when we look at how the Library of Congress keeps track of 164 million books and other collections items.

Back in the day of physical card catalogs, item storage simply meant building enough shelving to hold all that stuff, bound or in containers. As a result, the Library’s John Adams Building, an art deco delight, was built in the 1930s to hold the overflowing collections; and later, the Library’s James Madison Memorial Building opened, in 1980, with significant storage capacity tucked in among its reading rooms.

But by the new millennium, it was clear some new approach would be needed to handle the 12,000 items that are accepted into the collections daily. As a result, the Library now has five (soon to be six) specialized buildings in Fort Meade, Maryland, designed to hold Library materials safely and efficiently. With shelves that soar quite high (special forklifts move the items), everything in these climate-controlled structures is bar-coded. This allows every inch of shelving space to be fully used. Researchers requesting items from such storage are served within 24 hours, sometimes later the same day.

Another approach is the Library’s special storage for rare collections. Custom boxes are created to hold rare or fragile items, such as those in a set of climate-controlled locking cases in the Geography and Map Division containing items from the unparalleled Kislak Collection of Mesoamerican artifacts. 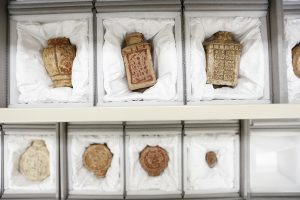 With special storage that ensures preservation, the 3,800 items in the Kislak Collection—about 25 percent of them are on public display at any given time, in the “Exploring the Early Americas” exhibition—are available to researchers at all times, said John Hessler, curator of the collection.

He praised James Thurn of the Preservation Directorate and Thurn’s team of box-makers, as he displayed a ceramic figure (300–650 CE) cradled in a specially carved bed of foam designed in the 21st century that could be slid sideways out of its preservation box, “so the object doesn’t have to be touched too much.”

Researchers from around the world come to study the objects, which range from ceramic and stone figures to a rare notebook penned in a native language by a Spanish missionary, to beautiful, flag-like panels woven using brilliant Macaw feathers. “No one actually knows what they were used for—probably to create some sort of sacred space,” Hessler said.

When the Kislak Collection first arrived at the Library, “It was nothing like this,” placed securely in closets but without the special preservation and access now made possible. “Now . . . if it’s not on display, it’s still accessible to researchers.”

On the Library’s Capitol Hill campus, book storage has been made more efficient by the use of shelving that rolls on rail-like tracks. The aisle space ordinarily left between fixed shelves is eliminated by putting the shelves on rollers, so they can be packed tightly together but an access point can be created instantly by turning a wheel at the end of a shelf, “So you don’t need all the aisles simultaneously,” said Steven Herman, chief of the Collections Access, Loan and Management Division. “It’s much more efficient.”

Special cold storage at the Packard Campus for Audio Visual Conservation in Culpeper, Virginia, ensures that precious old movies shot on nitrate-based film stock will have longer life and remain chemically stable. Nitrate stock, used for nearly all 35mm filmmaking until about the 1950s, is a fire hazard.

A nitrate fire, if one gets going, is “a tough critter,” said Stephen Leggett, liaison specialist for the Library’s National Film Preservation Board. “It creates its own oxygen when it burns.” As a result, the nitrate film vaults at Culpeper isolate each film container in its own cubbyhole. Should a fire start, water would be released from overhead pipes at a rate of 200 gallons per minute, creating a curtain of water that would let the fire burn itself out within its compartment. To date, the campus has never had a fire and the nitrate film storage area, at 35 degrees F and about 30 percent relative humidity, has kept the film treasures intact.

Check out a video of Library of Congress staff constructing a custom storage box here.