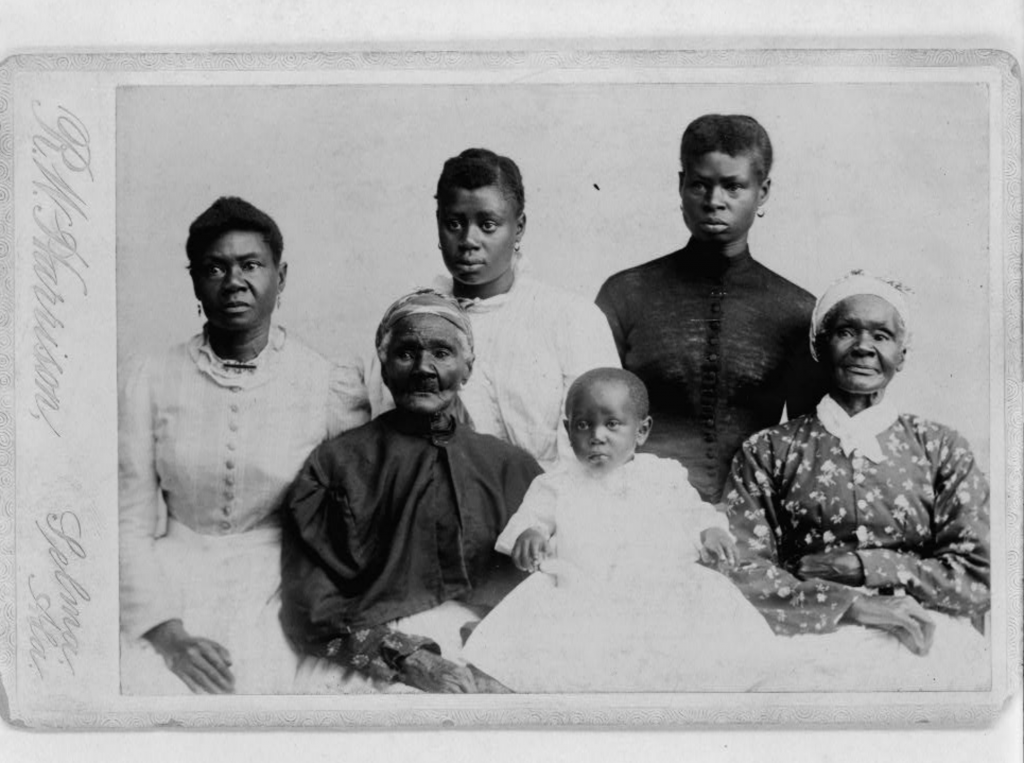 It’s time once again to dip into our Free to Use and Reuse sets of pictures, culled from the Library’s millions of copyright-free photographs, prints, maps and so on. This month, we’re featuring things that relate to ever-popular genealogy searches, as people look to uncover the secrets of their past by identifying their ancestors and the lives they led. The Library is great for this, offering ways to identify your ancestors, and then help document how and where they lived.

First up is this remarkable photograph of five women and a toddler, taken in Selma, Alabama, in 1893, in the studios of R.W. Harrison. It’s titled “Six Generations,” but there are no names or other identifying information. This prompts a number of questions. Namely, what is the order of birth, and is this all one family? Let’s presume the latter is true. Certainly in that era, when photographs were formal occasions, a family portrait was more likely than not; and, besides, the women certainly appear to be related.

As to order of birth: The toddler is the youngest; it’s reasonable to think that the matriarch is the seated woman in the middle, just to the left of the child. I’d venture that second oldest is the woman seated on the right, in the patterned dress, followed by the woman seated at the far left, in the white dress. In turn, her daughter would be standing, in the black dress at right. The child’s mother, then, would be in the white dress, center. In sum, that’s everyone from the baby of the family to her great-great-great grandmother!

If we assume 20 years between each generation, that would make the eldest somewhere around 100, but it’s certainly possible she could be in her late 80s. Now, putting a historical filter over the image: In 1893, the Civil War was just 28 years in the past. That almost certainly means the oldest four women in the picture were born into slavery, with the eldest born no later than the administration of Thomas Jefferson.

If the toddler remains in Selma (not at all assured, given that the Great Migration began drawing African Americans to northern cities when she will be a teenager), she will be in her mid 60s when Rosa Parks electrifies the nation by refusing to give up her seat on a city bus to a white man in Montgomery, setting off the bus boycott that launched the civil rights movement. A decade later, when she is in her mid 70s, the Selma-to-Montgomery Marches will jolt her hometown into history and will lead to the Voting Rights Act of 1965.

Of such photographs, books are written. 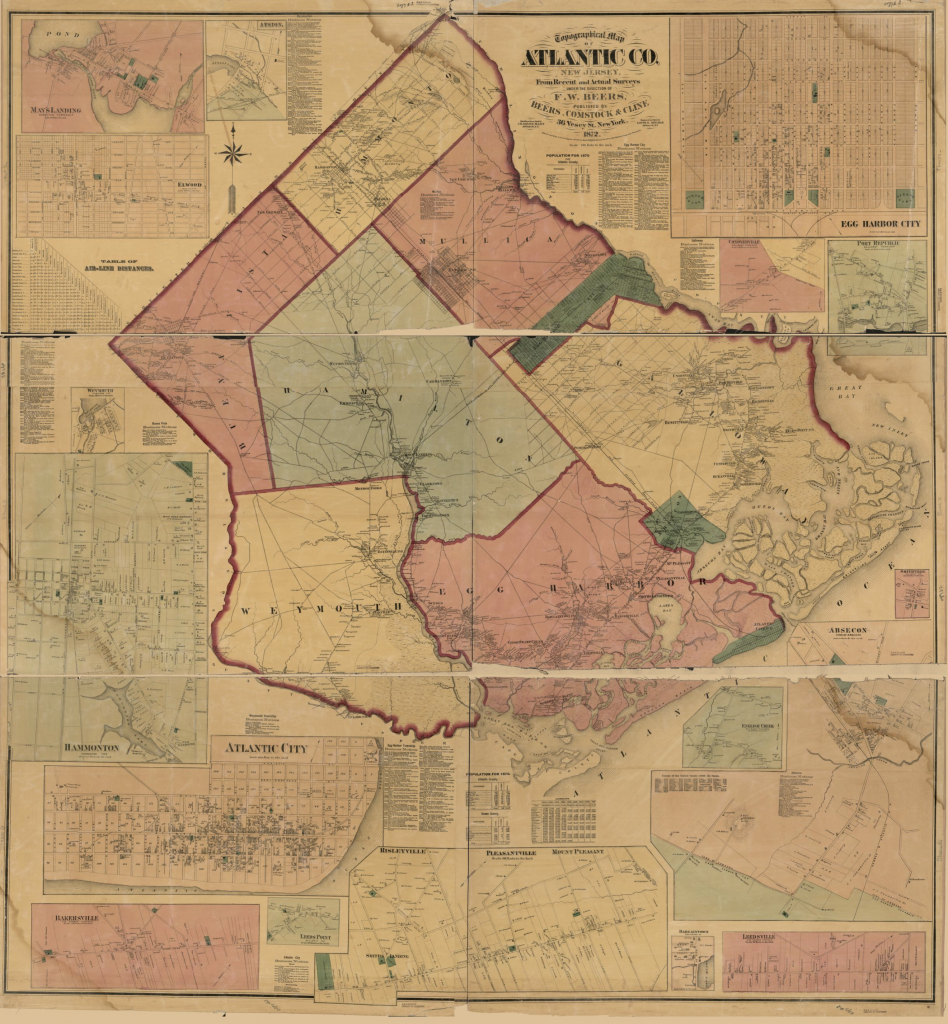 Perhaps your roots are in Atlantic City, New Jersey, or thereabouts? This 1872 topographical map of Atlantic County is detailed down to the block, with property owners names listed in most places. Atlantic City had a population of 1,043. Not only would this show you where your ancestor lived, it would let you know who lived next door and down the street.

And, finally, an urbane photo from D.C. in 1907. It’s titled “Mr. Chow and Family in Auto,” and pictures a family out for what looks to be a Sunday drive — one child is seated next to Mr. Chow, another in the back with two women. The picture was donated — and possibly taken by— one Barnett McFee Clindist. It is included in a set of 21 small prints that “Includes portraits of government officials and socialites; photo montage of President Wilson and his family… group portrait of automobile manufacturers in automobiles at the White House … montage portrait of the U.S. Supreme Court justices” according the cataloguing data.

It would seem, then, that Mr. Chow is a socialite of some note, possibly, given the political nature of other photos in the set, a diplomat. He’s wearing a spiffy bowler, the car top is down and the dirt road is dry, so it looks like a fine day for a jaunt. Perhaps this is Rock Creek Park? Has one of the children asked, “Are we there yet?” Was that a thing, then? The automobile was such a newfangled invention that the destination may have been immaterial; the point of the afternoon was just the grand experience of your dad puttering you about in his grand motorcar. You could wave to the lesser mortals as you passed. That would likely do just fine. 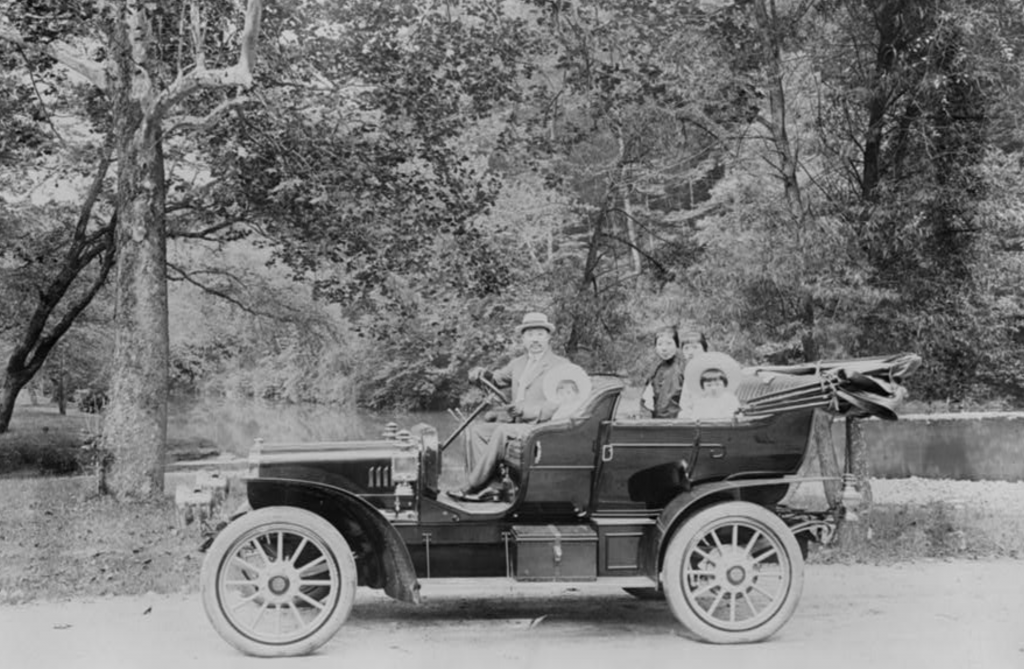