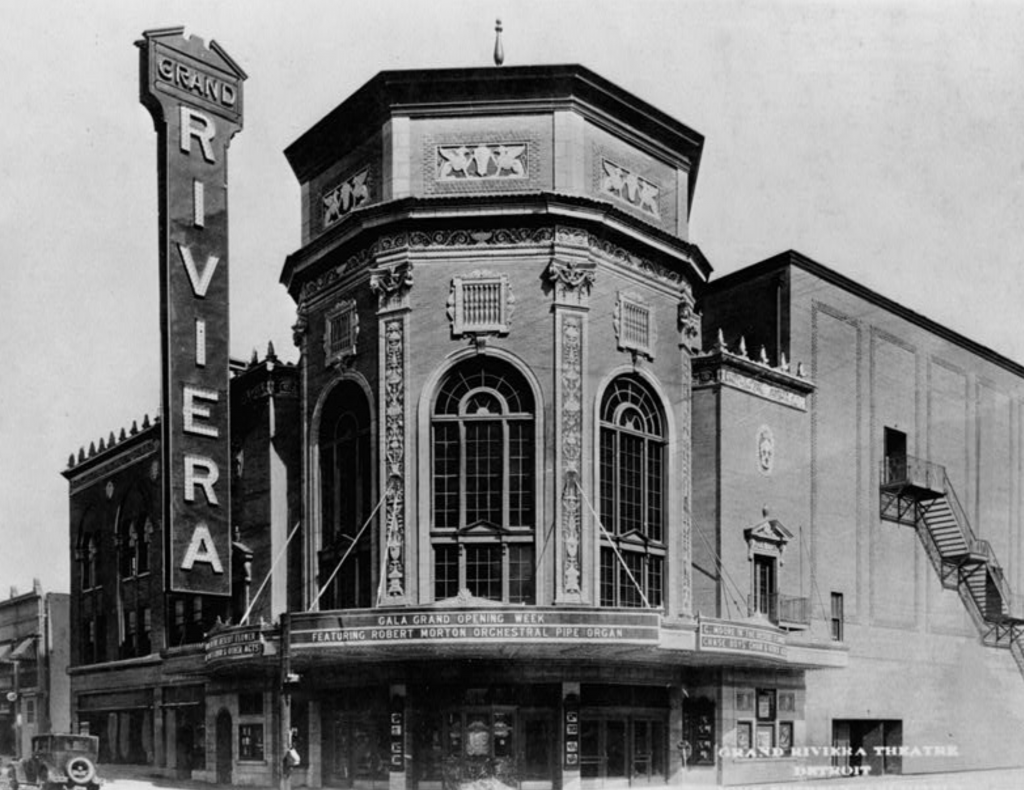 The Grand Riviera Theatre opened on Grand River Boulevard in Detroit in 1925, an intoxicating, million-dollar movie palace designed to resemble the wealthiest of Italian Renaissance courtyards. It was gorgeous. It was crazy. You couldn’t believe it.

Three stories, 3,000 seats and an 80-foot octagonal tower above the ticket window. The theater’s namesake sign was a vertical wonder, spelling out RIVIERA, one letter below the next, in lights that shone for blocks. Just inside, the lobby was a rotunda that soared forty, fifty feet straight up, a rounded chamber of multi-paned windows, a chandelier hanging from a painted ceiling. The floor was marble. The wood was mahogany. There was a smoking room for gentlemen. Ladies could repair to a well-appointed parlor.

You can see the Riviera in all its long-lost splendor, and dozens of other unique movie theaters, in this month’s set of Free to Use and Reuse prints and photographs from the Library’s collections of copyright-free material. There’s the neon-lit Tower Theater, a Sacramento landmark. Grauman’s Chinese Theatre in Los Angeles. The Ritz Theatre in Greenville, Alabama, an Art Deco building opened in 1935 and now devoted to the performing arts.

But it was ornate movie palaces that were the rage in the 1920s when the Riviera was built. It was designed by architect John Eberson, who built dozens of similar theaters in the Roaring Twenties. His signature developments were huge “atmospheric” auditoriums, designed to look like a garden or courtyard or somesuch.

Detroit’s entry would be no exception, for the city then! The energy! It was home to the booming automobile industry – Ford, Cadillac, Chrysler, Packard – and growing like mad. Maybe 265,000 people in 1900; 1.56 million people in 1930. It was the fourth largest metropolis in the nation. The Riviera, set in the 9200 block of Grand River Boulevard, one of the city’s main arteries, was more than six miles from downtown and yet the district pulsed with life.

People came in droves, walking from nearby houses, bringing the kids, the whole thing an adventure. Once inside, just past the lobby, patrons walked into the auditorium. It was a vast, open space, the floor sloping to the front. Far overhead, tiny lights twinkled, star-like, in an arched ceiling that melted into darkness. The walls were lined with statuary and bas relief sculpture. Seats were plush. Ushers wore military-style uniforms. It was so mobbed that an 1,800-seat annex was built in 1927. 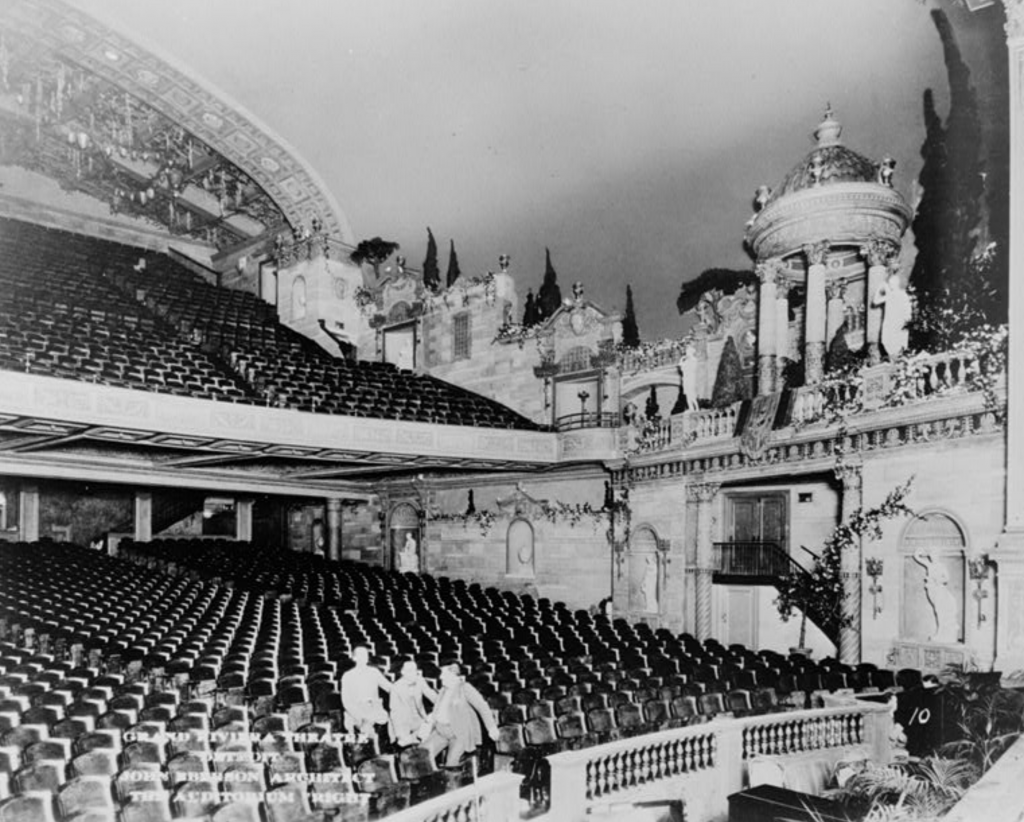 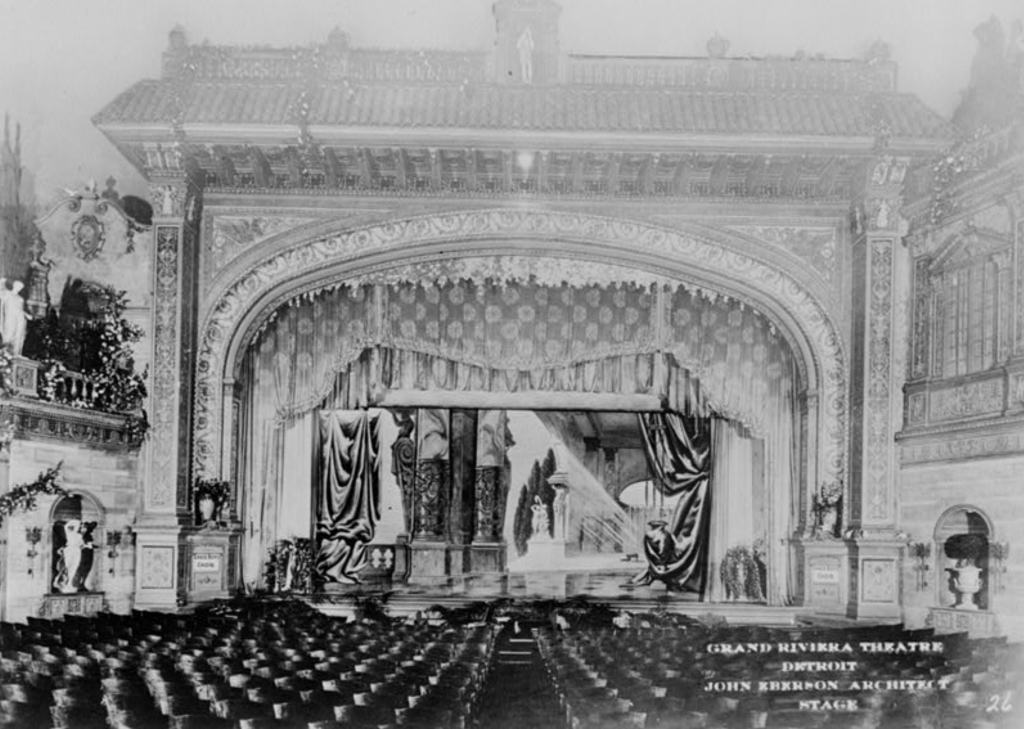 But as the decades rolled past and pages dropped from the calendar, times and fortunes changed. The auto industry started to collapse in the 1950s. The city’s white population began fleeing for the suburbs in the 1960s. Detroit went from being a symbol of American muscle to a symbol of American rust and ruin.

By October of 1970, the Riviera was fading. In the photo below, the marquee is missing several letters. Three films are on offer, but two are retreads. The draw was “The Executioner,” a spy thriller starring George Peppard. Filling out the bill was “Machine Gun McCain,” with John Cassavetes and future Bond girl Britt Ekland, from 1969; and “Salt & Pepper,” a racy comedy with Sammy Davis Jr. and Peter Lawford, that was two years old. 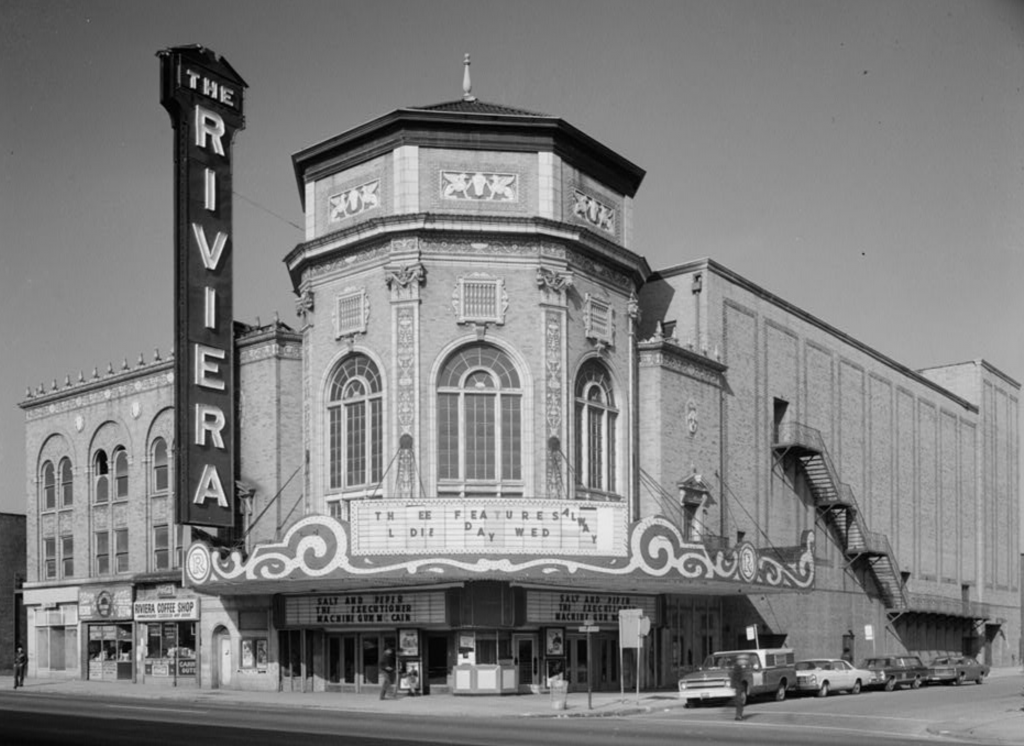 A few years later, the place was turned into an arena for rowdy rock concerts. The Who played there. The Kinks. Fun, sure, but the magic was gone. By the 1990s, when the city’s population had dropped below one million – roughly the size it had been in 1920 – the Riviera was an abandoned wreck in a city full of them. It was demolished in 1996.

Today, the site is a local office of the Social Security Administration, a bland, one-story brick building. An empty lot is across the street, as is a beauty supply store, an abandoned building and a liquor store. The downtown skyline now looks so far away that it seems another place entirely.

But, so many years ago, it had been a fine time, the evenings at the Riviera on the wide boulevard, the vertical sign flickering on in the falling darkness, the promise of a crowd, the buzzing conversations, the men in hats, the ladies in dresses, a night in Detroit that you’d remember for years.