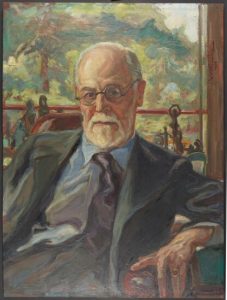 The personal papers of Sigmund Freud at the Library of Congress have been digitized and are available online Included on the Library’s website for streaming are 11 home movies of Freud made between 1928 and 1939. Margaret McAleer, a historical specialist of modern America in the Library’s Manuscript Division, oversees the Library’s more than 100 collections documenting the history of psychoanalysis. Here, she writes about Freud’s last days in Vienna as the Nazis approached.

Sigmund Freud wrote these emotionally freighted words in his diary on March 22, 1938, as he waited anxiously in his Vienna home. His daughter Anna Freud had been arrested that morning and taken to Gestapo headquarters. She was released later in the day, but her arrest added urgency to a decision Freud made only days before – his family would try to leave Vienna. But had they waited too long?

Freud died 80 years ago today, on September 23, 1939, debilitated by an oral cancer first diagnosed in 1923. Freud lived another 16 years, witnessing the rise of fascism in Europe and an impending war. As the founder of psychoanalysis, Freud’s ideas of the unconscious and theories on sex, repression, transference and religion had a profound influence on 20th-century Western thought. His papers are

In 1923, when diagnosed, all Freud asked of his physician was help to “disappear from this world with decency,” according to Peter Gay’s 1988 biography, “Freud: A Life for Our Time.” He was determined to be in Vienna when that time came. The intensity of his resolve matched the urgency with which colleagues and friends begged him to leave as the Nazi threat began to grow. In March 1933, Hitler assumed broad dictatorial powers as chancellor of Germany. That same month, Austria was in political turmoil, following the suspension of its parliament. In May, Nazis burned Freud’s books in Berlin. Freud’s sons, Oliver and Ernst, decided it was time to leave Berlin where they had established careers and settled their families. Oliver relocated to France and Ernst to England.

Yet their father remained rooted in Vienna.

“The only thing I can say,” Freud wrote to his nephew Sam in July 1933, “is that we are determined to stick it out here to the last. Perhaps it may not come out too bad.”

Freud’s cancer returned in 1936, and he remained in continual pain from the disease and the oral prosthesis, a sort of elaborate denture, he wore. His health was failing while the world spun out of control. Still, he stayed in Vienna.

“Vienna has been in panicky spirits,” Anna Freud wrote to British psychoanalyst Ernest Jones in February 1938, also quoted in Gay’s biography. “We are not going along with the panic.”

All that changed in the next weeks. With chilling minimalism, Freud recorded in his diary the end of Austria (“Finis Austriae”) in March: Sunday “13/3 Anschluss with Germany”; Monday, “14/3 Hitler in Vienna.”

The next day, Freud’s home and publishing house were searched, and his passport was confiscated. John Cooper Wiley, an American diplomat in Vienna, cabled: “Fear Freud, despite age and illness, in danger.”

Then Anna was arrested by the Gestapo. She carried with her a lethal dosage of Veronal. It had been given to her secretly by her father’s physician, Max Schur, as an optional way out if she was tortured. 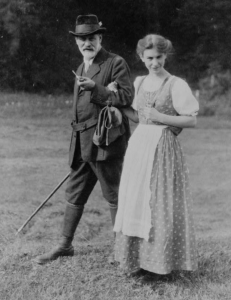 Freud walking with his daughter, Anna, 1913. Prints and Photographs Division.

Freud had finally agreed to leave Austria a few days before. He chose England as their place of exile. Even with Freud’s fame, however, it was far from certain that the Nazis would let the family depart. They almost didn’t. Considerable diplomatic and international pressure on his behalf were required in order for them to depart on June 4, 1938. Freud was accompanied by his wife, Martha; his daughter, Anna; his housekeeper, Paula Fichtl; and a young physician, Josephine Stross, who monitored his health. Stross was included at the last minute when Schur, Freud’s usual doctor, developed appendicitis. Other Freud family members for whom exit visas had been granted, including his son Martin, daughter Mathilde Freud Hollitscher, brother Alexander, and sister-in-law Minna Bernays, had already left.

Freud settled in London with his wife, sister-in-law, and Anna. Nearly a year later, family and friends celebrated what would be his last birthday at his home in Hampstead, at 20 Maresfield Gardens. Captured in a home movie, the gathering looks remarkably carefree. Not far from the minds of those who attended, however, was a war that seemed increasingly inevitable and family members who were absent. Among those not present were four of Freud’s sisters, Adolfine Freud, Pauline Freud Winternitz, Marie Freud, and Rosa Freud Graf.

War was declared by summer’s end, on September 1, 1939. Freud died three weeks later, at the age of not knowing the eventual fate of his sisters. Unable to secure exit visas, they remained in Vienna, with as much financial assistance as the Freuds could arrange. In 1942, they were transported to the Theresienstadt ghetto, where Adolfine soon died. In the fall, Rosa, Marie, and Pauline were transported from Theresienstadt to the Treblinka extermination camp, where they were executed in its gas chambers. The family learned of their deaths in early 1946.