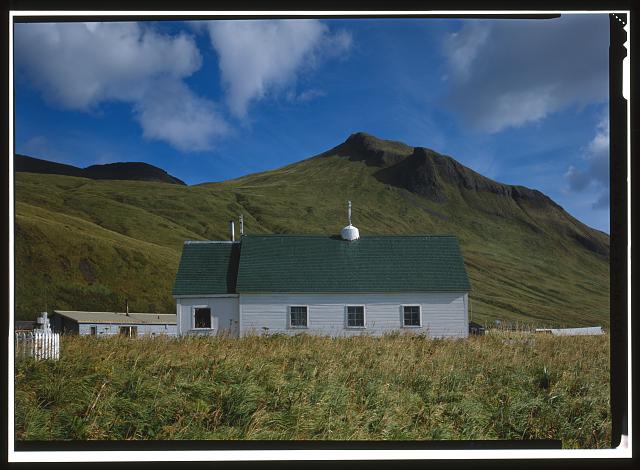 St. Alexander of Nevsky Russian Orthodox Church has a simple wood frame and a gable roof that covers its nave and sanctuary. It is located in Aleutians East Borough, Alaska.

Settlers’ cabins, high-style mansions, jails, barns and churches. These are just a few of the properties the Historic American Buildings Survey has painstakingly documented over the past 80 plus years. The Library started digitizing the survey’s records—many of them stunning and unique—20 years ago, providing public access on its website.

Known as HABS for short, the survey began in 1933 as part of President Franklin Delano Roosevelt’s New Deal. Architect Charles Peterson of the National Park Service proposed that the government employ 1,000 out-of-work architects, partly to support recovery from the Great Depression, but also to record America’s architectural heritage, increasingly threatened by the forces of modernization. Peterson wrote:

Our architectural heritage of buildings from the last four centuries diminishes at an alarming rate. The ravages of fire and the natural elements, together with the demolition and alterations caused by real estate “improvements” form an inexorable tide of destruction destined to wipe out the great majority of the buildings which knew the beginning and first flourish of the nation. . . . It is the responsibility of the American people that if the great number of our antique buildings must disappear through economic causes, they should not pass into unrecorded oblivion. 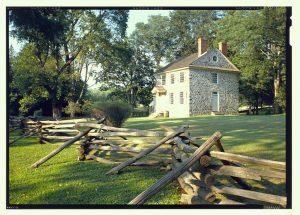 Isaac Potts House in King of Prussia, Penn., served as the headquarters and residence of General George Washington during the encampment of the Continental Army in the winter and spring of 1777–78. 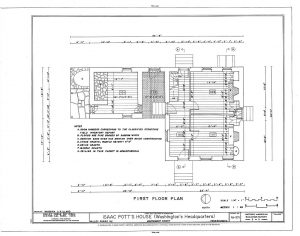 Measured drawing of a room on the first floor of the Potts House, where administrative business of the Continental Army was conducted. 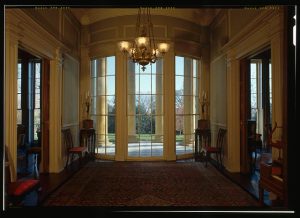 View from the salon of Tudor Place in Washington, D.C. The house is an example of the federal-style architecture built in the U.S. between about 1780 and 1815.

Many of the properties first documented reflected high-style architecture. But HABS administrators advised fieldworkers to include buildings not previously considered of interest to the “architectural connoisseur,” such as Native American structures, the “hewn log cabins of the early pioneers,” and buildings in old mining towns. Special priority was to be given to buildings “in imminent danger of destruction.”

The Library of Congress has been a HABS partner from the start with the American Institute of Architects and the National Park Service. The institute advises the survey from the perspective of private-sector architectural practice; the Park Service develops guidelines and produces standard-setting documentation; and the Library maintains the collection and provides public access.

Users of the HABS collection include students, historians and even Hollywood producers aiming to convey the look and feel of an era. Architects often seek out HABS plans and drawings, including for restoration projects for which design details are available only in historical measured drawings.

Building on the success of HABS, the Historic American Engineering Record was founded in 1969 using the same model to document engineering works and industrial sites. The Historic American Landscape Survey was established in 2000 to document historic landscapes. Together, the three collections are among the largest and most popular in the Library’s Prints and Photographs Division. 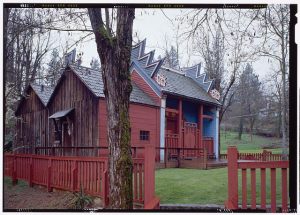 The Temple Among the Trees Beneath the Clouds in Weaverville, Calif., is a house of worship used by Chinese immigrants since 1874.

For some time now, students pursuing advanced degrees have produced much of the survey documentation, making the surveys an important training ground for aspiring architects, engineers and historians.

It’s safe to say that Charles Peterson would be more than pleased with the results of what he saw as a temporary make-work program to document threatened properties at a key moment in history. Thanks to his vision and the efforts of thousands of fieldworkers since, we now have a valuable repository of knowledge about the built environment to help tell America’s story.

The Historic American Buildings Survey is highlighted on the website this month under the Library’s “free to use and reuse” feature. As works created for the U.S. government, records from the survey are in the public domain, meaning you are free to use them as you wish. However, material from private sources occasionally appears with the survey records. These materials are noted by the presence of a line crediting the original source. So make sure to check each image before publishing or distributing it.