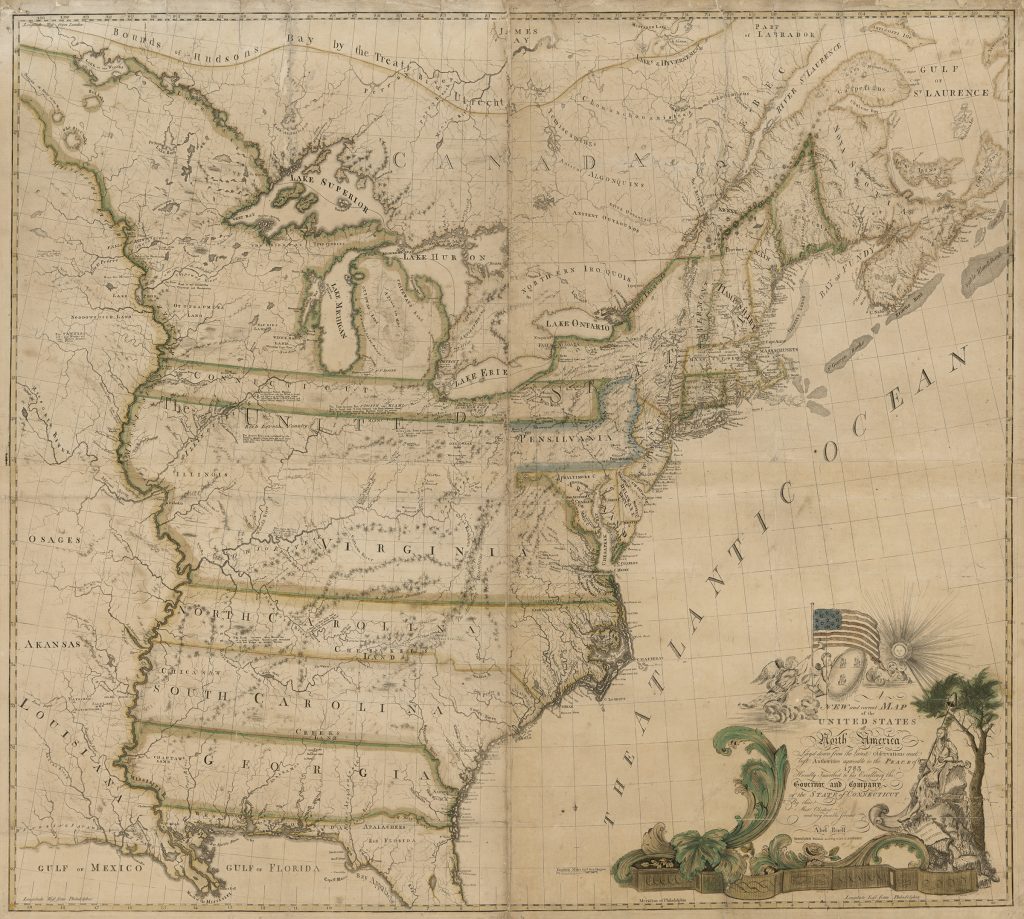 This is a guest post by Kimberli Curry, exhibition director in the Interpretive Programs Office.

Library of Congress specialists often give presentations about ongoing Library exhibitions. We are pleased to introduce a new blog series, “Galley Talks,” featuring content from these presentations. This first post relates to the exhibition “Mapping a New Nation: Abel Buell’s Map of the United States, 1784.”

Abel Buell’s “New and Correct Map of the United States of North America,” 1784. On deposit to the Library of Congress from David M. Rubenstein.

In March 1784, Abel Buell (1742–1822)—a Connecticut engraver, silversmith, inventor and entrepreneur—produced his ”New and Correct Map of the United States of North America,” the first map of the newly independent United States to be compiled, printed and published in America by an American. If not for the publication of his landmark map, Abel Buell might have been forgotten despite being quite a colorful character.

In his early twenties, Buell succumbed to temptation and used his engraving skills to change 5-shilling notes to 5-pound notes. He was found guilty of counterfeiting in March 1764 and received the typical punishment of the day: his forehead was branded with the letter “C,” his ear was cropped, his property was sold to reimburse holders of his “artwork” and he was imprisoned. Buell was released from jail shortly thereafter, but he was ordered to remain within his small town.

Buell’s liberty was fully restored after he reasoned before the court that he had been hard at work developing an apparatus that could cut and polish gems and presented the prosecutor with a ring mounted with semiprecious stones. The result? He received Connecticut’s first patent for his lapidary machine. 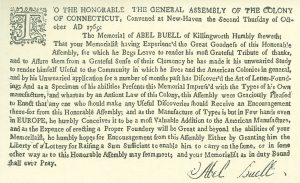 Meanwhile, Buell began to experiment with fabricating printing type, a useful craft at a time when type needed to be imported and was very expensive. In 1769, Buell successfully petitioned the Connecticut General Assembly for a loan to establish the first foundry for making type in the colonies. It never came to fruition and, after failing to pay back the loan, Buell fled New Haven in 1775 to avoid imprisonment.

He continued to lead an audacious life, most likely participating in the Boston Tea Party, and he was apprehended after helping to destroy a statue of King George III, among other adventures.

Returning to New Haven, he bounced from one ambitious project to another. On March 31, 1784, Buell placed an ad in the Connecticut Journal for the sale of his most well-known endeavor, his “New and Correct Map.” Besides its somewhat hurried quality—he was most likely in a race with another mapmaker to produce the first map of the United States—what makes the map quintessentially “Buell” is his characterization of it as a work in progress to be updated over time with new information. This never happened; instead, Buell bounced to another project.

In 1785, Buell minted the first Connecticut coins—an odd turn of events for a convicted counterfeiter. For this endeavor, he patented a machine that could mint 120 coins a minute, an impressive feat at the time.

Four years later, he’s off to England—he may have departed hastily after manufacturing unauthorized New York coins, or he may have been sent as an industrial spy to learn about the British textile trade.

Upon his return, he erected one of the first cotton mills in New England; a year later, he placed an ad in a Connecticut newspaper for every good and service under the sun—except for anything related to a cotton mill. He next invented a machine for planting vegetables that enabled one man to perform the work of 20. Sadly, Buell was unable to profit financially from his many labors.

When Buell died penniless in New Haven in March 1822, his death notice read simply: “Died: At the Alms House in this town, on the 10th, Mr. Abel Buell, aged 81 years, an ingenious mechanic.”

There are only seven known copies of Buell’s map, including the one on display in the Library’s exhibition. For more on Buell and his map, visit the exhibition online and the related exhibition “Mapping a Growing Nation.”