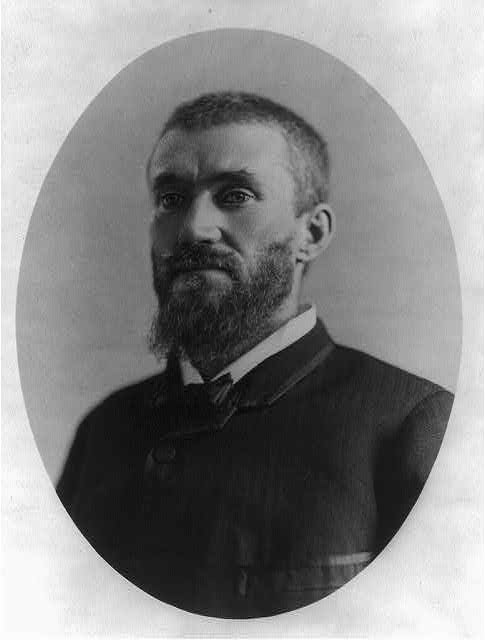 This story is adapted from an upcoming story in the Library of Congress Magazine. It recounts the day of July 2, 1881 — 138 years ago — when President James A. Garfield was shot at a train station in Washington and the national drama that ensued.

Something about Charles Guiteau wasn’t right — anyone could see that. He so creeped out the women of his religious community that they nicknamed him “Charles Git-out.” His wife — he later managed to find one — divorced him, convinced he was possessed by an evil spirit.

Guiteau’s own family thought him insane. I’d have Charles committed, his father once wrote, if only I could afford it. His sister, long a defender, finally admitted the problem after Charles threatened her with an ax.

“It was the look of his face that frightened me,” she would recall. “He looked to me like a wild animal.” 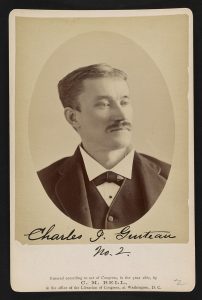 Guiteau, photographed in jail, by C.M. Bell, on February 6, 1882. Prints and Photographs Division.

One man’s madness ordinarily isn’t the stuff of history. Guiteau’s story is anything but ordinary.

In 1881, he stalked and shot down the president of the United States — a tale of murder, insanity, invention, arrogance and incompetence preserved at the Library in the papers of President James A. Garfield (recently placed online), Alexander Graham Bell and others.

Though no one in the Washington establishment really knew him, Guiteau believed himself a kind of political hero — the man who got Garfield elected president. During the 1880 campaign, Guiteau had delivered a speech supporting Garfield at a small gathering. Even before Garfield won, Guiteau was convinced his speech — heard by few, noted by none — would make a crucial contribution to victory. The new president, he felt, owed him a plum diplomatic post as a reward.

“I would like the Austrian mission and call your attention to it, as ‘first come, first-served,’ ” he wrote Garfield, weeks before the election. (Guiteau later changed his mind: He preferred Paris.)

In his characteristic unsettling way, Guiteau sought support from prominent Republicans. Sen. John Logan once awoke to find him sitting in his parlor. After Garfield took office in 1881, he began showing up at the White House. Finally, Secretary of State James G. Blaine, tired of the badgering, told him to drop the matter — a rejection that persuaded Guiteau he must “remove” the president. Chester Arthur, a friend of the spoils system, then would become president, Guiteau figured, and he would have his post in Paris. 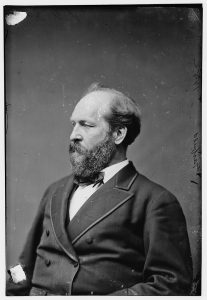 The night of July 1, Garfield wrote in his diary about the day’s events and a trip to New England scheduled for the morning. “Retired at 12,” he concluded — the last entry he would write. The next day, Guiteau ambushed Garfield in the train station waiting room, shooting him in the arm and the back.

Physician Doctor Willard Bliss — “Doctor” was both his first name and his profession — examined Garfield at the station and, back at the White House, declared himself head of Garfield’s medical team. “If I can’t save him,” Bliss said, “no one can.” That decision would have the gravest consequences: Bliss couldn’t locate the bullet lodged in Garfield’s body, and weeks of probing the wound with unsterilized fingers and instruments produced infections that ultimately killed the president.

Over the next 2.5 months, Bliss issued regular bulletins — posted at telegraph and newspaper offices — to a nation anxiously awaiting news of Garfield’s condition. Eager to help, everyday Americans offered advice — preserved on scraps of paper — about the president’s diet, spiritual well-being and medical care (“pass a double catheter into the presupice,” one advised). Navy engineers, trying to ease Garfield’s suffering in the suffocating summer heat, rigged up what would be America’s first air conditioner in the president’s room.

Among those keen to help was Bell, by then a renowned inventor who four years earlier had successfully introduced the telephone. He set to work on a device he believed could be used like a modern metal detector to locate the bullet in Garfield’s body.

In letters and laboratory notebooks, Bell chronicles his race to improve this “induction balance” machine quickly enough to save the president. He tinkered, tested, failed and, exhausted, tinkered more.

“I feel woefully disappointed and disheartened,” Bell wrote after the first examination of Garfield failed to locate the bullet. “However, we go right at the problem again tomorrow — trying to improve our apparatus.”

Illustration of Bell’s device being tested. Bell is with earpiece at right. Aug. 20, 1881. Sketch by William A. Skinkle.

A second exam of Garfield failed, too, and likely couldn’t have worked: Attending staff failed to remove a mattress with metal springs, throwing off the device. And, fatefully, Bliss permitted Bell to search only the area of the wound, on the right side of Garfield’s body. The bullet, it turned out, was on the left.

Bliss, his reputation now bound to the outcome of Garfield’s case, continued issuing optimistic bulletins even as it became clear to Garfield and others around him that he was dying. Old friend Almon Rockwell, writing on the back of a railway pass, recorded scenes around Garfield’s bed just days before he died. 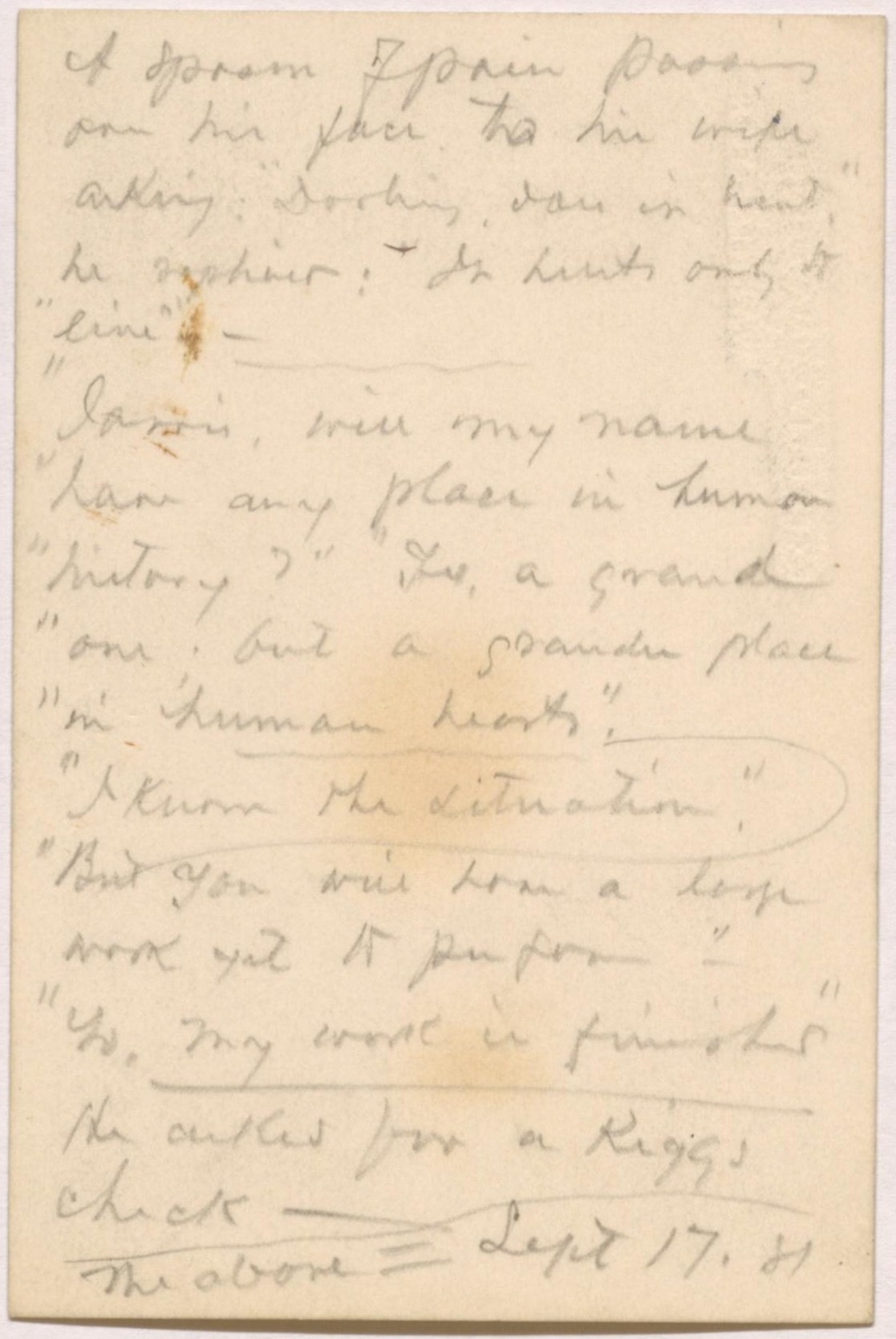 “A spasm of pain passing across his face…” Garfield’s last days, as recorded by Rockwell.

“Darling does it hurt?” Garfield’s wife, Lucretia, asked. “It hurts only to live,” he replied.

Garfield died Sept. 19, and Guiteau soon faced justice in a trial every bit as strange as his life had been. He objected to his own lawyer’s arguments and sang “John Brown’s Body.” He confessed to the shooting but not the murder — the doctors, he said, had killed the president. The jury quickly found Guiteau guilty, and he was hanged on June 30, 1882, at the D.C. Jail, then at 19th & C Streets SE. He mounted the gallows and recited a poem he wrote for the occasion. It went, in part:

“I saved my party and my land,
Glory hallelujah!
But they have murdered me for it.”

When he finished the poem, the trap dropped, and it was over.

Months earlier, Garfield, surrounded by family and friends, had pondered his passing life.

“Will my name,” he asked, “have any place in human history?”

“Yes, a grand one,” came the reply, Rockwell recorded. “But a grander place in human hearts.” 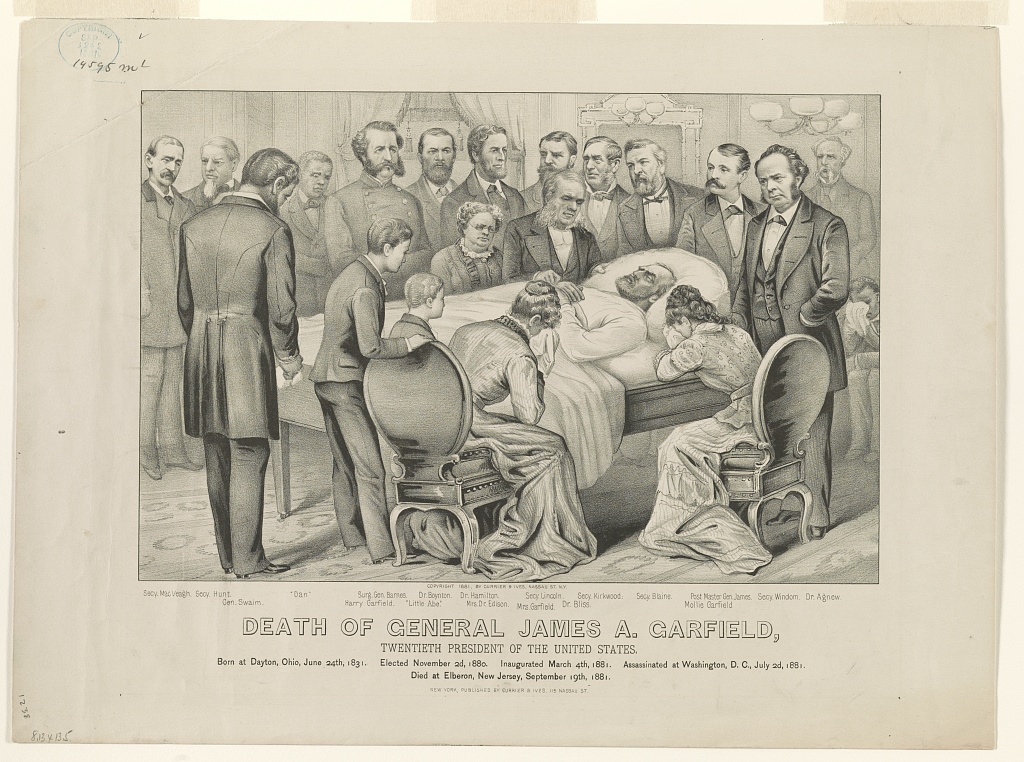