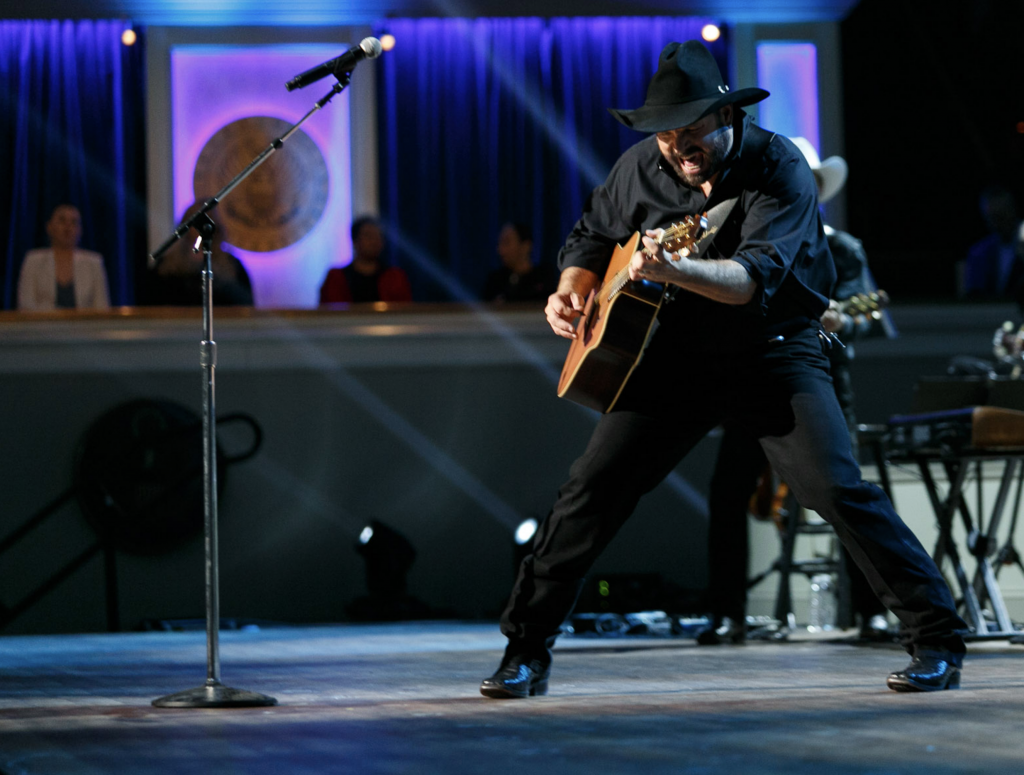 Gershwin Prize winner Garth Brooks and his wife Trisha Yearwood were at the Library for several events this week. Monday night, they talked on stage at the Coolidge Auditorium. Tuesday was dinner with Madison Council members and other VIPs. Wednesday was the taping of the PBS concert special. Here’s Mark Hartsell with the play-by-play of the couple’s on-stage chat with the Librarian.

Before he rocked the Gershwin Prize concert at DAR Hall, Garth Brook couldn’t help but put on a show in the Library itself.

Decked out in his trademark cowboy hat and boots, the country music superstar paced the Coolidge Auditorium stage on Monday night and preached love and tolerance. He did an impression of a Doobie Brother singing a song about processed meat. He ate a bag of M&Ms a fan left for him on the stage floor. And, presented with two miniature Gershwin Prize medals, he dropped down on one knee before his wife, proposal style, to pin one on her dress.

Brooks and wife Trisha Yearwood, herself a country star and a celebrity chef, came to the Coolidge to talk with Librarian of Congress Carla Hayden about love, food, music and the Gershwin Prize for Popular Song — Brooks on Wednesday was honored as the 11th recipient of the Library’s annual prize.

“I’m proud as a country artist,” Brooks said. “We’re getting to fly the country flag this week in D.C. There are a million people that deserve to be in this seat more than I do, but it’s representing the songwriters — that’s what I love. The songwriters are the seeds to everything.”

Together, Brooks and Yearwood are country music’s most overachieving couple.

Brooks ranks as the No. 1-selling solo artist in U.S. history in any genre, with 148 million albums sold. He is the only artist ever to earn seven RIAA Diamond Awards, each signifying an album that sold over 10 million copies — as many as Michael Jackson, Elton John, Madonna, Prince and Elvis combined.

Like her husband, Yearwood is a big-time country star with a slew of platinum albums, hit singles and Grammys. Once a background singer who Brooks helped get a recording contract, Yearwood rose to fame in 1991 with “She’s in Love with the Boy” — the first of 19 top-10 hit singles.

Proving she’s a musician with more than one note, Yearwood also has authored three bestselling cookbooks, held down a recurring role on the TV legal drama “JAG” and for the past eight years hosted “Trisha’s Southern Kitchen,” an Emmy-winning culinary program on the Food Network.

With a tip of his hat, Brooks walked onstage with Yearwood on Monday and, together, they sat with Hayden for about 50 minutes of conversation before a fired-up crowd that included fans who had traveled to D.C. from Texas, Ohio, California and Florida just for the occasion.

Brooks and Yearwood discussed a daughter’s college graduation (“I’m the first Brooks to graduate high school in my teenage years,” he quipped. “This was big for our family”). Yearwood described how, with Brooks’ advice, she stays creative in the kitchen (“Take something you know, throw in tortellini and see what happens”). And Brooks demonstrated a game they play at home — singing songs in other artists’ voices — by imitating Doobie Brother Michael McDonald singing a vintage Oscar Mayer jingle (“My baloney has a first name, it’s O-s-c-a-r”).

Blame it all on his roots, but the young Brooks had to quickly learn that the dress code that mattered in the business of country music was coat and tie, not cowboy hat and boots. He went to Nashville, saw how many lucrative livelihoods depended on the inspiration of others and realized he wasn’t quite ready for music as business. After less than 24 hours, he turned around and went back to Oklahoma.

He eventually came around.

“There’s a lot of things in this this world where people think if you take care of business that means you’re not an artist,” Brooks said. “I just want to remind people that if you truly care about the music, you will take care of it after it’s created as well. You will make sure that everybody gets a chance to hear it the best that they can because there’s something in those songs.”

The business still is especially tough for young women trying to make it as performers or songwriters, Yearwood said.

As a young artist, she always tried to follow a What Would Reba Do rule — lessons she drew from watching the successful career of singer and actress Reba McEntire. That often boiled down to a simple dictum: Don’t talk about what’s not equal, just work harder.

Now, as a veteran performer, she tries to offer young women a similar example and personal encouragement.

Toward the end, Brooks passionately preached about tolerance, love and openness to others’ points of view — a theme of their shows — until even he could take it no more.

“I’ve sat as long as I can,” he said, getting up from the sofa and walking the stage as he spoke.

“Stand up for what you believe in. At the same time, turn these on,” he said, pointing to his ears. “Listen. Digest, then spew if you have to, but don’t try to out-scream each other. … That’s why I think that like-mindedness is good — a common goal, to love one another, to get somewhere. But how we’re going to get there is going to take all of our opinions and all of our efforts. It really is.”