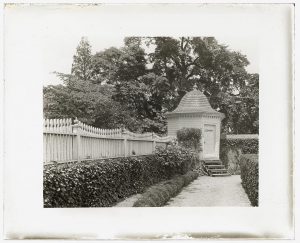 This is a guest post by Julie Miller, a historian in the Manuscript Division. The division’s holdings of the papers of George Washington (1732–1799) constitute the largest collection of original Washington papers in the world.

In 1786, English agricultural reformer Arthur Young wrote to George Washington, addressing him as a “brother farmer” and offering to send “men, cattle, tools, seeds, or any thing else that may add to yr rural amusement.” Washington took Young up on his offer and asked for two plows and many bushels of seeds, including cabbage, rye, hops, wheat and barley.

The correspondence between Washington and Young, in George Washington’s papers at the Library of Congress, began with these letters and lasted into Washington’s presidency. To Washington, these exchanges of seeds, plants and information were an effort to improve his and his neighbors’ farming practices and satisfy his interest in agriculture. But looking back after more than two centuries, it is clear that Washington, whether he knew it or not, was taking part in something much bigger: an exchange of plants, animals, people and diseases between America and the rest of the globe that had been ongoing since at least 1492. The historian Alfred W. Crosby, who died this March, called this process the “Columbian Exchange” in his 1972 book of the same name.

The Columbian Exchange was transformational in ways both beneficial and tragic. Foods native to the Americas, such as potatoes and corn, enriched the European food supply, contributed to a rise in population and spread around the world. European wheat and livestock reshaped American woodlands and plains. Diseases carried over from Europe, notably smallpox, decimated native American populations, and Africans were wrested from their homes to become American slaves.

Sometimes the exchange was accidental, as with infection, or when seeds traveled across the Atlantic in mud clumped on the soles of English boots. At other times, as with Washington and Young, it was intentional; the collecting, classifying and exchanging habits of 18th-century scientists meshed neatly with the Columbian Exchange.

When Young and Washington began writing each other, they were tapping into a transatlantic network of plant collectors and scientists that was already well established in Washington’s part of the world. One node on this network was John Custis IV. Born in Virginia in 1678, Custis had a house and garden in Williamsburg. In 1724 he wrote: “I have a pretty little garden in wch I take more satisfaction than in anything in this world.” 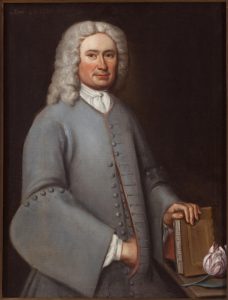 One visitor to Custis’s garden was John Bartram (1699–1777), a Pennsylvania plant collector who became King George III’s “botanist for North America” in 1765. Another was Mark Catesby (1682–1749), an English plant collector and artist, whose paintings of American plants and animals are in Britain’s Royal Collection today.

One of Custis’s most important botanical friends was Peter Collinson (1694–1768). A London cloth merchant and botanist, he was a skillful scientific networker with ties to plant collectors, nurserymen, scientists and kings. He subsidized Bartram’s plant-collecting expeditions, filled the gardens of British aristocrats with American trees and flowers and was friends with Benjamin Franklin and Carl Linnaeus. John Custis’s letterbook, which has been published and is in the Custis-Lee Papers at the Library of Congress, contains the letters he wrote to Collinson between 1732 and 1742. These document Custis and Collinson’s regular exchanges of seeds, bulbs, plants, trees and the occasional creature, including an opossum Custis sent to Collinson in 1738.

In 1749, John Custis died. The following year his son, Daniel Parke Custis, married Martha Dandridge. When Daniel died within a decade of his marriage, he left Martha Dandridge Custis a wealthy young widow. When she remarried in 1759, she delivered a large portion of her father-in-law’s property, including his extensive library, into the hands of her new husband, George Washington. When Washington inventoried Custis’s library soon after his marriage, the first book he listed was Mark Catesby’s “Natural History of Carolina, Florida, and the Bahama Islands,” published in London between 1731 and 1743. 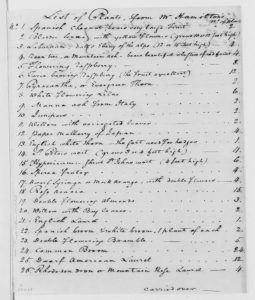 In 1792, Washington ordered this list of plants from John Bartram to plant at Mount Vernon.

Washington’s interest in agricultural experimentation, nourished by his connection with John Custis, never abated. It is documented in his papers at the Library of Congress, which include the records of his purchases of seeds and books, the reports he received weekly from his farm managers, his reading notes, his letters and his diaries. This diary entry for March 21, 1763, describes Washington grafting English cherries and planting a variety of Italian pine, evidently the same tree whose seeds Peter Collinson had once sent John Custis for cultivation in his Williamsburg garden.

In at least one instance, Washington carried Custis’s botanical connections into the next generation. In Philadelphia in 1787 to preside over the constitutional convention, Washington visited the garden established by John Bartram, now run by his sons. He found it “Stored with many curious plts. Shrubs & trees, many of which are exotics,” but thought it “was not laid off with much taste, nor was it large.” Despite this sniffy comment, Washington ordered a long list of plants from John Bartram Jr.

Washington also made his own connections. Arthur Young was one, and another was John Sinclair (1754–1834), who, with Young, established the British Board of Agriculture. In the year before his death, Washington told Sinclair about a Virginia farmer who had found and cultivated a new variety of early wheat. “I send you a sack; that by experiment you may ascertain the utility of cultivating it in England,” Washington wrote Sinclair.

With letters like this one, George Washington maintained the transatlantic networks that made the world, even in the 18th century, global.