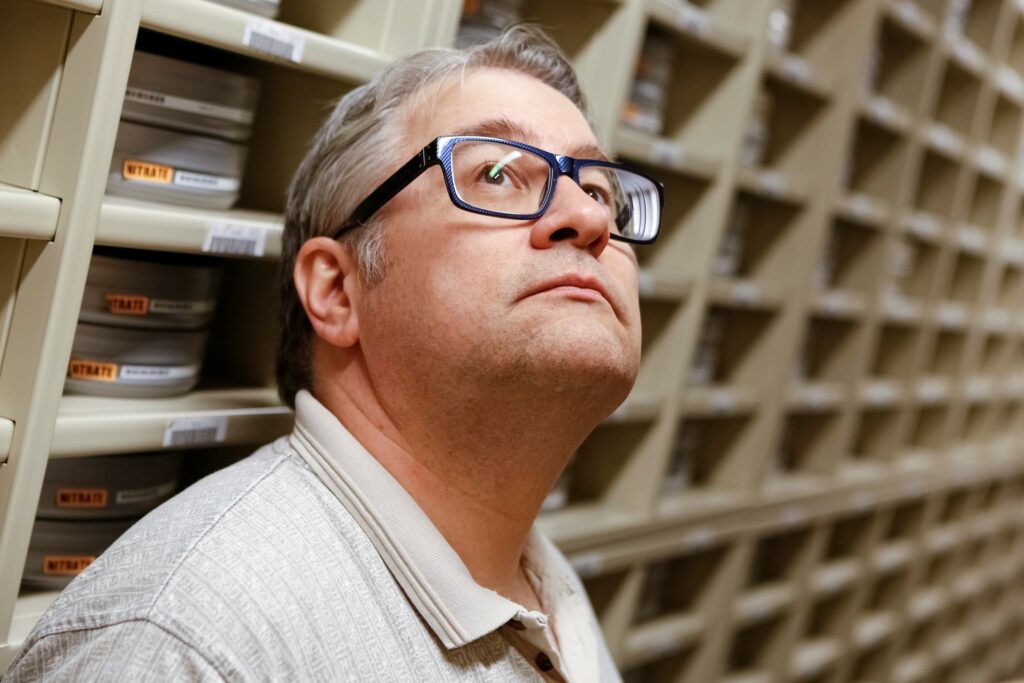 It’s Public Service Recognition Week, so we caught up with George Willeman, leader of the nitrate film vaults at the Packard Campus of the National Audio-Visual Conservation Center in Culpeper, Virginia. Willeman, a 37-year veteran of the Library’s film preservation team, has played a key role in finding, preserving and restoring some of nation’s classic early films. This conversation has been edited for length and clarity.

So what are you doing right now, as we speak?

Scanning some of Jerry Lewis’ Christmas cards from one his scrapbooks.

Wait, are you serious?

Absolutely. We have Lewis’ archives and he kept everything. Here’s a Christmas card from Alan Ladd. Here’s one with a crest on the front from “Lady Janet and Sir Anthony.” That’s Janet Leigh and Tony Curtis, from when they were married. They were big friends with Lewis and they lived very close by. Lots of home movies with them, too.

Are Lewis’ home movies as family friendly as his in-theater movies?

Fair enough. What does a “nitrate film vault leader” do on a daily basis?

My official job, as it’s written down, is to manage the nitrate vaults at the Packard Campus and take care of our collections. Films were made with cellulous nitrate up through the 1950s. It’s highly flammable, so we all have to be trained to handle hazardous material. That adds another level of stress — you have to do it right, or there could be an accident or we could be heavily fined.

And here I thought you guys just watched old movies all day.

Well, it can be pretty exciting. My training in college was filmmaking. Sometimes we complete or reconstruct old films, parts of which are damaged or missing. “Ramona” is a 1928 silent film with Doloros del Rio, but the only known remaining copies, for whatever reason, had foreign title cards, in German or Czech. We had to put new ones into English. The problem was that the direct translations didn’t work. But over in the Copyright collections – in another part of the Library, on the Capitol Hill campus — we found an old contest that had almost all of the original title cards in English. We also went to the original novel and matched a section in that to the scene in the movie and recreated the title card that way. That reconstructed version is now on a streaming service and you can see it there anytime you like. 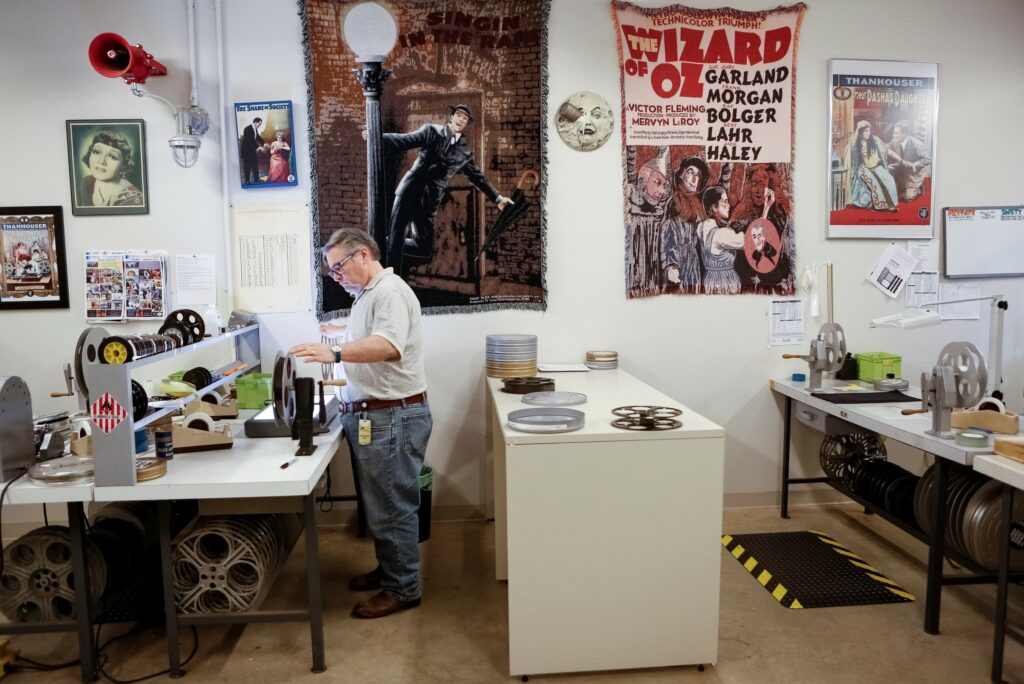 Willeman inspects the film reel for the 1910 “Frankenstein” short film made by Edison Studios at his office. Photo: Shawn Miller.

Does the LOC have a financial stake in that?

No, because we can’t make money on these things as a government agency. But we get a screen credit and it’s nice for the Library.

Which leads me to: How does the work you do pay off for the country’s taxpayers?

Film is one of our great tools for education, entertainment and enlightenment. Our collection dates back to pretty much Day One of film — we have material from the early 1890s — so while we do have some of the popular stuff, the things I’m really excited about are these little films of people farming and going to work and factories and ships and immigrants getting off the boats at Ellis Island. Without those, we have nothing to tell the story of how things looked and moved at the turn of the 20th century. One of my favorite sayings is George Santayana’s, “Those who cannot remember the past are condemned to repeat it.” So I kind of see as my job is to help prevent that, to make sure that people know who we were, what we looked like, how we dressed, how we walked, how we ate, that kind of thing. A lot of that work is going up on the Internet where it’s available to anyone, anywhere.

You’ve had a number of “wow” moments in your career. One that stands out?

Once, when I just a vault collection attendant in college, I was going through a collection of cans of nitrate films from the Thomas Edison Laboratories in New Jersey. Several of the cans said, “Great Train Robbery.” Well, “The Great Train Robbery” is a very important film and a lot of people will tell you it is the beginning of the film business. The cans listed what I was looking at as a “dupe negative.” At that point in my career, I didn’t know a lot about how film elements worked, but it didn’t look like a duplicate to me. So I called up our lab and they sent down an expert named James Cozart. We each looked at the film again and then at each other – this wasn’t a duplicate, it was the original camera negative of the film from 1903. To this day, I still take tour groups down the hall to show them that reel. It’s always fun to see the reaction. The neat thing is that it’s still usable. It hasn’t deteriorated, it’s just gotten old.