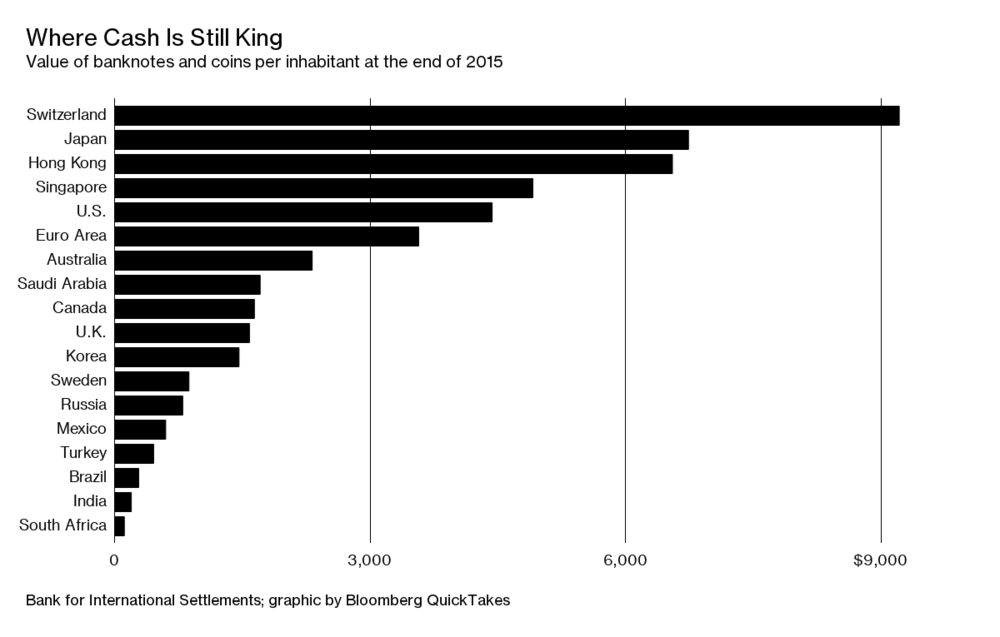 Do we need cash? Humans have used all sorts of things to exchange items of economic value — rare metals, strings of shells and even sunken boulders. Those objects have gotten more ephemeral, with paper money replacing most coins, and digital forms increasingly supplanting paper. Could physical cash go away entirely? Economists see great payoffs in a cashless society: lower transaction costs, new tools to manage economic growth and an end to tax evasion and money laundering. Critics see an end to privacy, frightening new powers for tyrants and costs that would fall disproportionately on the poor. The giant, if unintended, experiment that followed India’s attempt to withdraw 86 percent of cash in circulation showed one thing clearly: The end of cash is not likely to be a neat or simple process.

An error has occurred

You have 1 free Businessweek article left.

Not that much, at least in terms of economic activity. According to the Switzerland-based Bank for International Settlements, there was a combined $4.54 trillion worth of cash circulating in the countries of the euro zone and 17 other major economies at the end of 2015. That accounted for only 8.9 percent of their combined gross domestic product, a figure that crept up about 70 basis points since 2011 because of more per-capita cash in the U.S. and euro zone. The U.S. had the most notes being used, at $1.42 trillion, but Japan had the highest banknotes-to-GDP ratio, at 19.4 percent. Of course, each dollar, yen, euro or kronor changes hands several times a year, creating a multiplier effect on the amount of money.

2. What would it mean to go cashless?

With a swipe of a card, a click of a mobile-phone app or an impress of your forefinger, you’d have instant access to your entire wealth. Invisible networks connecting banks, shops, governments and businesses would handle the flow of transactions, changing the face of banking forever. A glimpse of this future is already evident in India, where 255 million people use Paytm, a seven-year-old startup backed by China’s Alibaba Group Holding Ltd., to make payments through a virtual wallet.

In the homeland of ABBA, the band whose “Money, Money, Money” made waves in the 1970s, cash is vanishing. Sweden is the most cashless society on the planet, with banknotes and coins accounting for just 1.7 percent of its GDP. Even God has gone digital there, as churches accept donations via mobile phones. Nigeria has signed up with MasterCard Inc. to deploy a new national-identity card with a prepaid payment system.

4. Who’s in favor of going cashless?

A wide range of institutions, including: