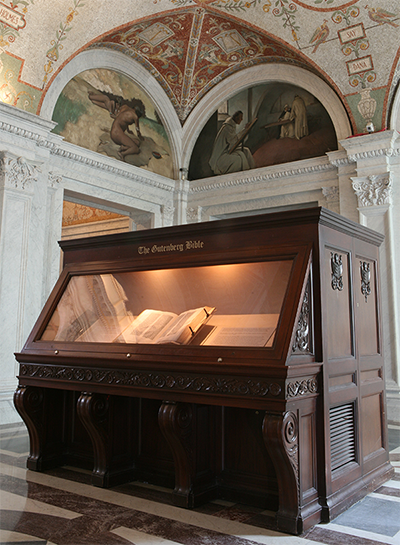 The Library’s Gutenberg Bible in its current display in the Great Hall of the Thomas Jefferson Building. Photo by Michaela McNichol

For the first time in more than 70 years, the Gutenberg Bible at the Library of Congress will be moved into a new display case specially designed for the artifact’s long-term conservation and to better showcase the iconic book.

To prepare for the new exhibit, the Gutenberg Bible will be taken off view Friday, Sept. 21, while the current case is removed. A new display case will be installed in late October, and the Bible will be placed in its new home in late November or early December, once environmental testing is complete.

An 11-foot-tall vertical case has been designed for the Gutenberg Bible to meet exact specifications for its long-term conservation. It will be kept at a consistent, cool temperature of 50 degrees and a consistent humidity to help preserve the 563-year-old book, according to Elmer Eusman, chief of the Library’s Conservation Division. The case also includes a new early warning system for fire prevention that will constantly monitor the air.

Frosted mirrors and illumination within the display will create a special effect, emphasizing the Bible in a new way. Resting on a small cradle, the Bible will appear as if it’s floating. The design is meant to celebrate the historic book. Exhibition text will be presented on one side of the case for visitors.

The new case will be located in the same area as the Bible’s previous display in the corridor off of the Great Hall of the Library’s Thomas Jefferson Building. The new case has been built by a vendor off site. It will be deconstructed, moved into the Library and rebuilt in this final location. Installation is scheduled for the week of Oct. 29.

A facsimile of the Bible will be on display while the systems in the new case are tested. A temporary display case will show a facsimile until the new case is installed.

The Gutenberg Bible is one of the treasures of the Library’s collection. It was printed by Johann Gutenberg, who developed the mechanical printing press, and was likely completed in 1455. The Gutenberg Bible was the first great book printed in Western Europe with movable type, marking a turning point in bookmaking, communication and the dissemination of knowledge. About 180 copies of the Gutenberg Bible were printed, and fewer than 50 survive today. Only 21 copies are complete.

The Library of Congress copy consists of three volumes printed on vellum, a fine parchment made from animal skins. It is one of only a few perfect vellum copies known to exist. The others are at the Bibliothèque Nationale in France and the British Library. For nearly five centuries, the Library’s copy was in the possession of the Benedictine Order at monasteries in Austria. It was purchased in 1930 by an act of Congress. 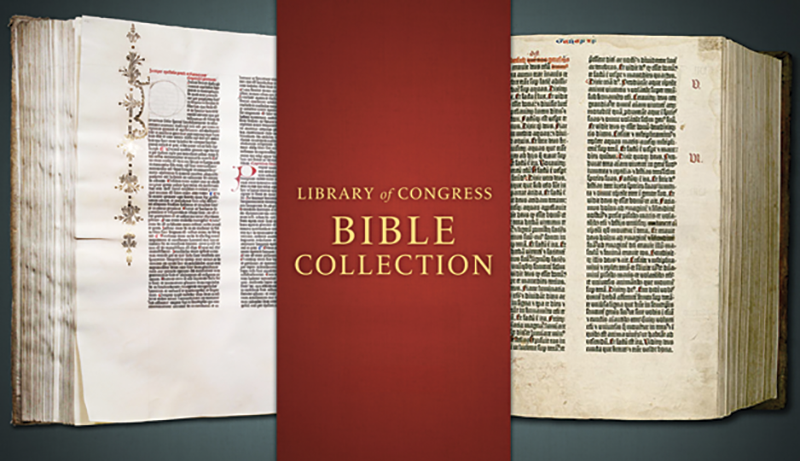