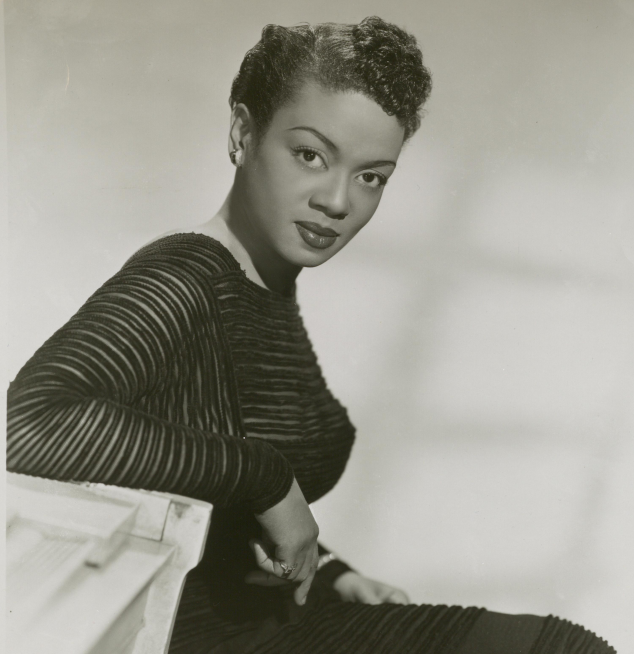 Hazel Scott in an undated publicity photo from early in her career. Music Division.

Hazel Scott was the gorgeous face of jazz at the mid-century.

She was the most glamorous, well-known Black woman in America, making more than $100,000 per year, draped in custom-designed jewelry and furs. She headlined sold-out concerts, hosted her own television show and starred in Hollywood films. She wowed integrated audiences – she refused to play a segregated room – mixing jazz and classical music. “Vivacious,” newspapers liked to say.

“She has the most incandescent personality,” raved the New York Times.

Jazz, meanwhile, was the crown jewel of Black American culture, the hot, sophisticated music that was remaking popular entertainment. It sent crowds dancing. It was romance. It was swing.

That era is preserved in the Library’s jazz collections, showcasing the music’s continuing influence. There are heartbreaking letters from Chet Baker, amusing ones from Louis Armstrong. The Library holds collections of material from Ella Fitzgerald and Jelly Roll Morton and the papers of Billy Strayhorn, Charles Mingus and Max Roach. The photographs of William Gottlieb are some of the most iconic in jazz history. 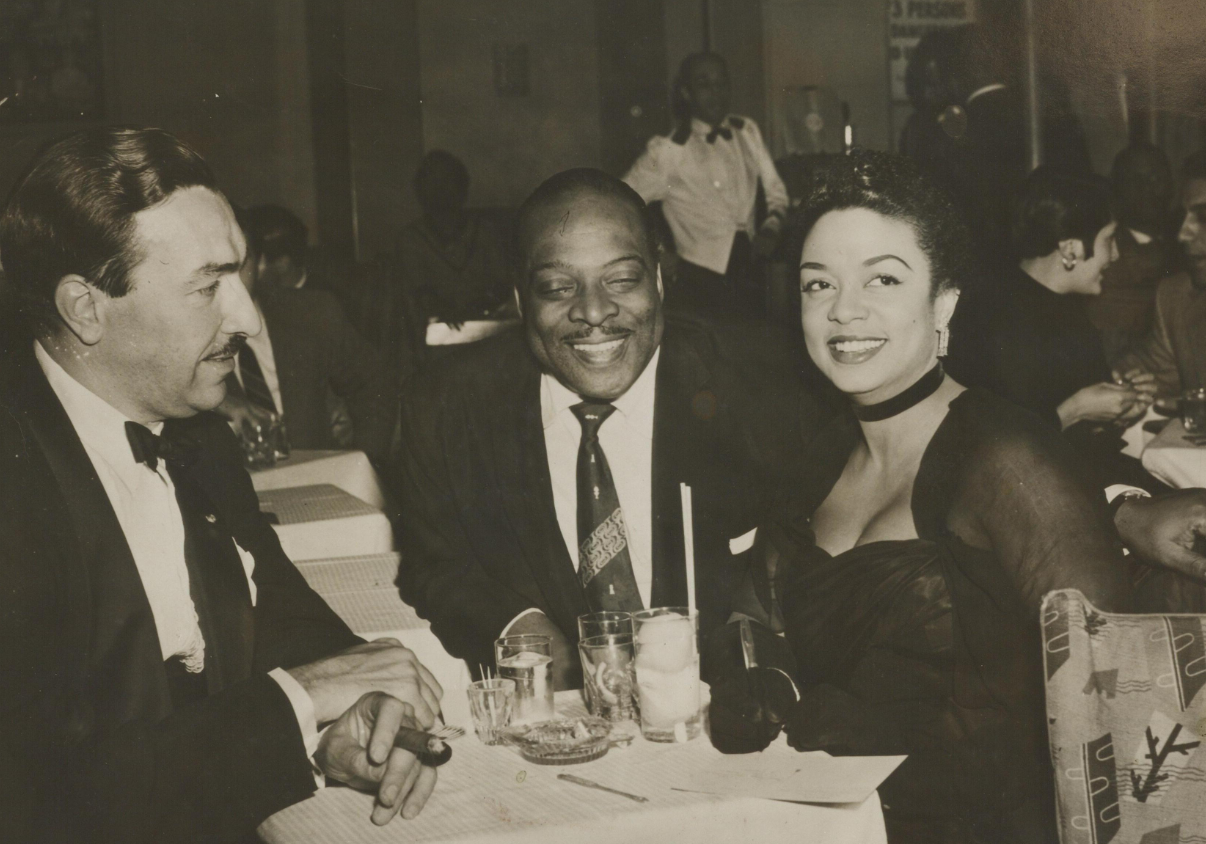 Scott’s story is captured in a collection of nearly 4,000 items, including music, diaries, contracts, scores, her unpublished autobiography and photographs.

Scott’s son, Adam Powell III, donated the collection to the Library in 2020, he said, so that her legacy endured in all its complexity, particularly since her stardom faded after being persecuted by the House Un-American Activities Committee during the Cold War. Besides, by the late ‘50s, Elvis was the rage, then the Beatles. Jazz was no longer center stage, and neither was Hazel Scott.

She died in 1981 of pancreatic cancer in a New York hospital. She took her last breath as Dizzy Gillespie, a friend for decades, serenaded her on a muted trumpet. She was 61.

“I’ve always wanted to do what I could to make sure that she was not lost,” Powell said. “Her intelligence and her talent and her values and her stubbornness as it were, so it could be something that was accessible to everybody.” 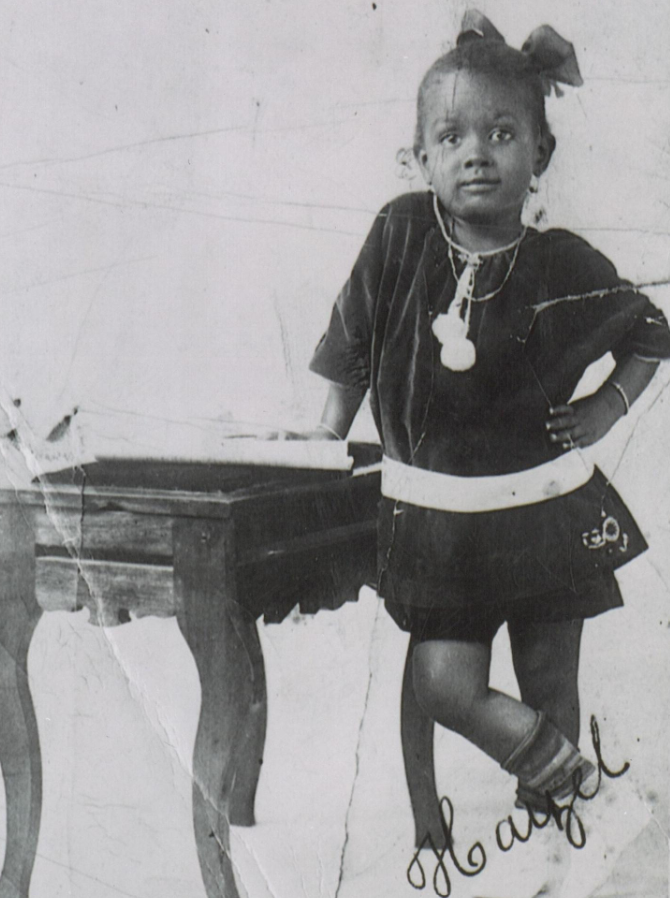 It’s a life story that reads like a Hollywood myth.

Born in Trinidad in 1920 and raised in Harlem by her mother, Alma Long Scott, a professional musician, she was a child prodigy with perfect pitch. The Julliard School of Music accepted her as a special student at the age of 8, when the minimum age for acceptance was 16.

Her mother often hosted and cooked for prominent musicians at their apartment. Scott grew up regarding Fats Waller as an uncle, Art Tatum as a de-facto dad and Billie Holiday as a big sister. Her first professional gig, at 15, was with the Count Basie orchestra. At 19, she was the star headliner at Café Society, the first integrated club in New York. In her early 20s, she’d hit the town with Leonard Bernstein on one arm and Frank Sinatra on the other. Lena Horne was a close friend. Langston Hughes mentioned her in a poem.

Her virtuosity was astonishing. She would start playing classical music, perhaps Bach or Beethoven, then slowly add syncopation and rhythm until it was swinging jazz. Then she’d launch into boogie-woogie. Her albums were hits.

She was a Hollywood film star at 23, making four films in one year, musicals like “I Dood It,” “The Heat’s On” and “Rhapsody in Blue.” She demanded the outrageous sum of $4,000 per week and got it. During the filming of “The Heat’s On,” she walked off set for three days until the wardrobe of the Black women dancers in her scene was changed from maids’ outfits to pretty floral dresses. 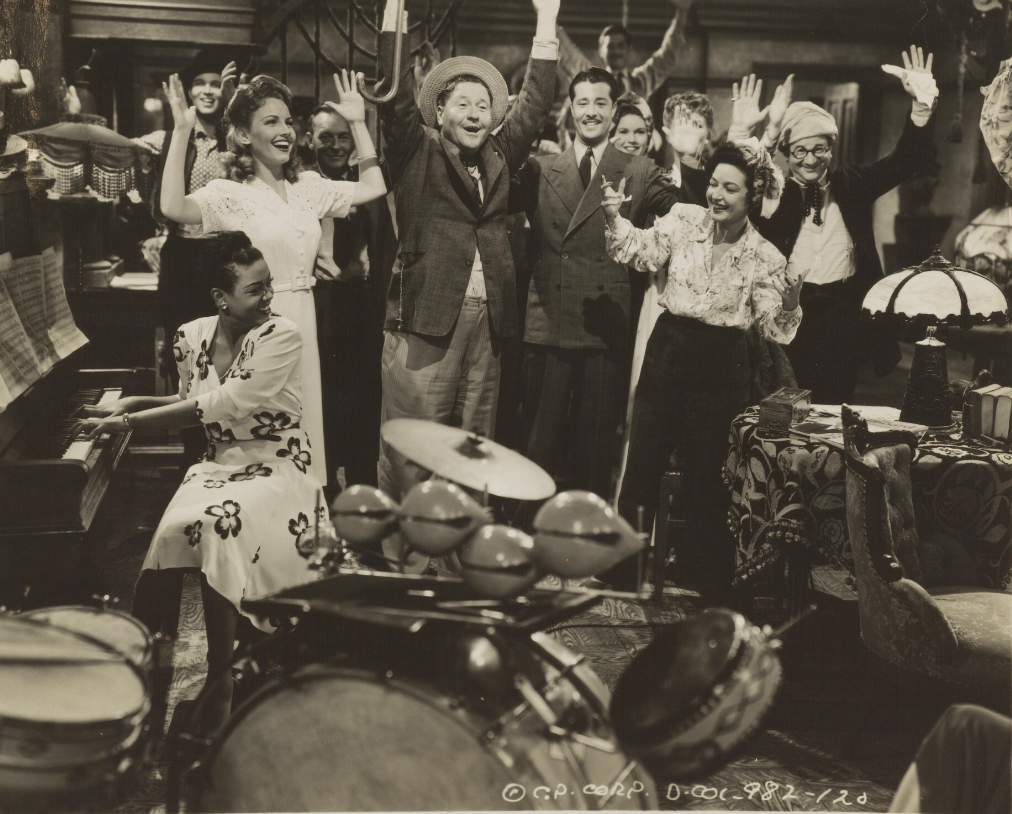 Scott plays piano, with Red Skelton and other cast members in a publicity still from MGM’s “I Dood It.” 1943. Photo: Unknown. Music Division.

In 1945, she married Adam Clayton Powell Jr., the Harlem congressman and pastor who was then the nation’s galvanizing civil rights leader. They made a dazzling pair, featured on magazine covers, in gossip columns and were the toasts of high-end parties in New York and Washington.

“She had every man in the room hanging on her every word,” Marjorie Lawson, a lawyer and civil rights activist who would later be D.C.’s first black female judge, told Powell biographer Wil Haygood of Scott’s first high-society appearance. “She was a sensation.” 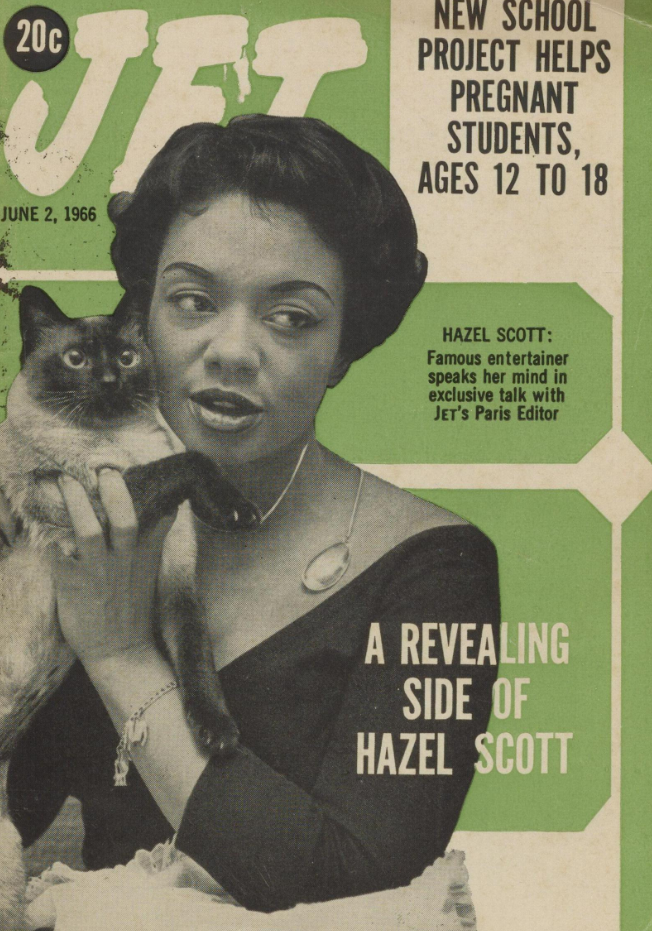 The couple were both fiercely devoted to civil rights. Conservatives accused them of being sympathetic to Communist causes during the Red Scare days of the Cold War. Scott’s name was listed in a pamphlet that attempted to smear her reputation. HUAC didn’t subpoena Scott, but she insisted on testifying before them anyway. Even her husband, who relished confrontations, urged her not to. She insisted, and, once on Capitol Hill, testified angrily. She finished by saying that musicians and artists should not be vilified by the “vicious slanders of small and petty men.”

The results were devastating.

In less than a week, her nascent television show – the first ever hosted by a Black woman — was canceled. Concert bookings dropped off. Her Hollywood career had already ended, and not just because of her stand about demeaning portrayals of Black women. Scott had called the wife of film mogul Jack Warner an epithet, she wrote in a draft of her unpublished autobiography, an incident which her son confirmed. It was one of a string of incidents over the years in which she recklessly lashed out.

Though she had made the equivalent of millions of dollars, tax brackets at the time claimed about 90 percent of it. Lawyers and accountants mismanaged much of the rest. The Internal Revenue Service said she owed far more taxes than she could pay. The Powell’s marriage crumbled, ending in divorce. She twice took overdoses of pills, but survived both suicide attempts. Stress sent her into eating binges. 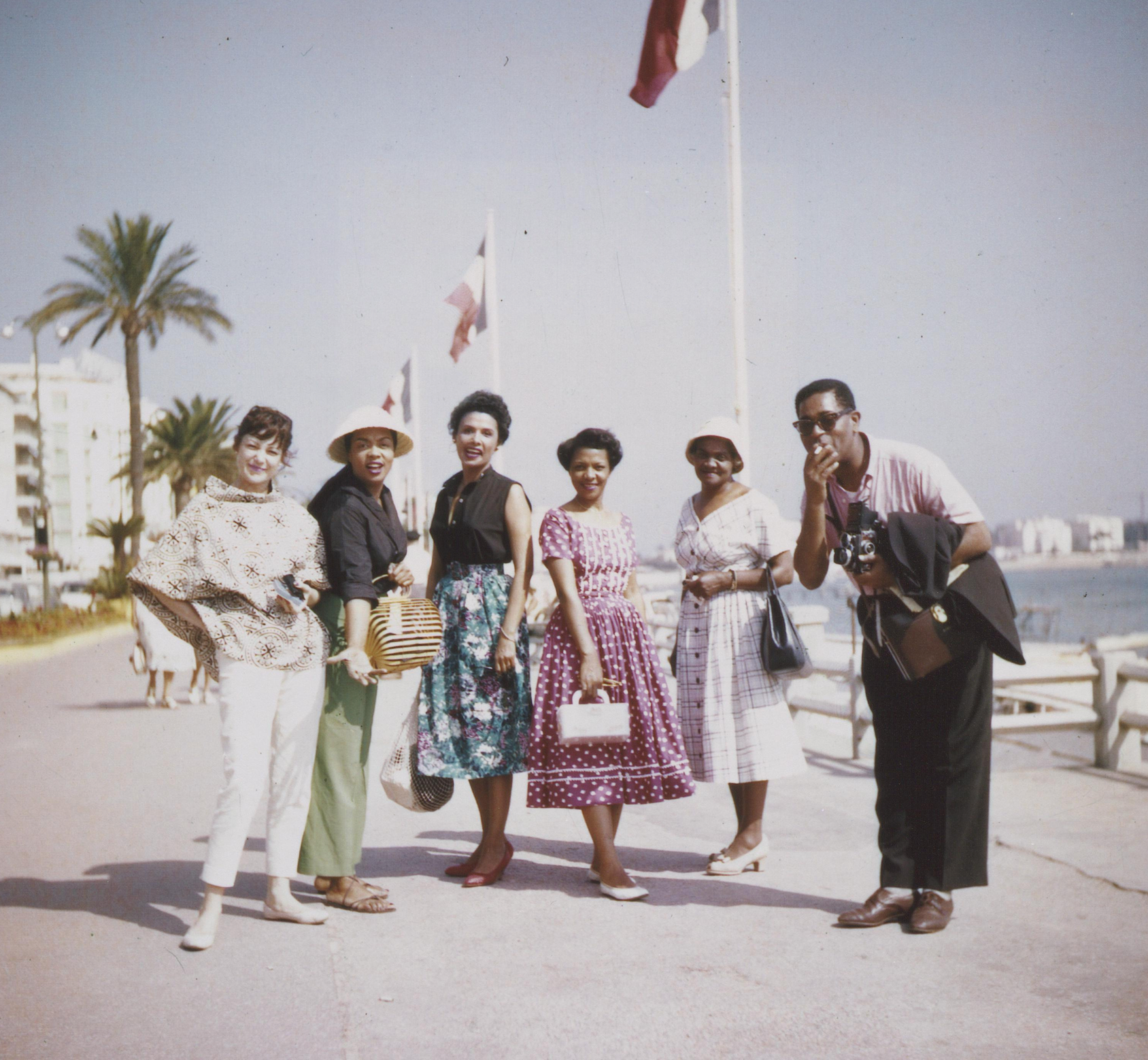 She moved to Paris with their son, had a brief second marriage and, for a while, made a nice living playing in Europe. She was happy, more relaxed, hosting dinners for friends – Holiday, James Baldwin, Nina Simone, Lester Young, Quincy Jones. But times changed during the ‘60s, and after a few years, she began to struggle with paying the rent, with her health. Horne and Simone urged her to come back home.

She was just 47 when she returned to the U.S. in 1967, finding a nation caught up in riots, protests, hippies, the Vietnam War and the latter days of the civil rights movement. Young activists scarcely knew who she was. Suddenly, she seemed old-fashioned.

Her work ethic kept her going, playing intimate clubs in New York, getting a few guest roles on television series and soap operas. She settled into the role of a doting grandmother to Adam’s kids and enjoyed her friends. She poured her angry observations about being a Black woman in America, including many painful scenes in which white men had attempted to prey on her as a young star, into drafts of an autobiography that was never published. 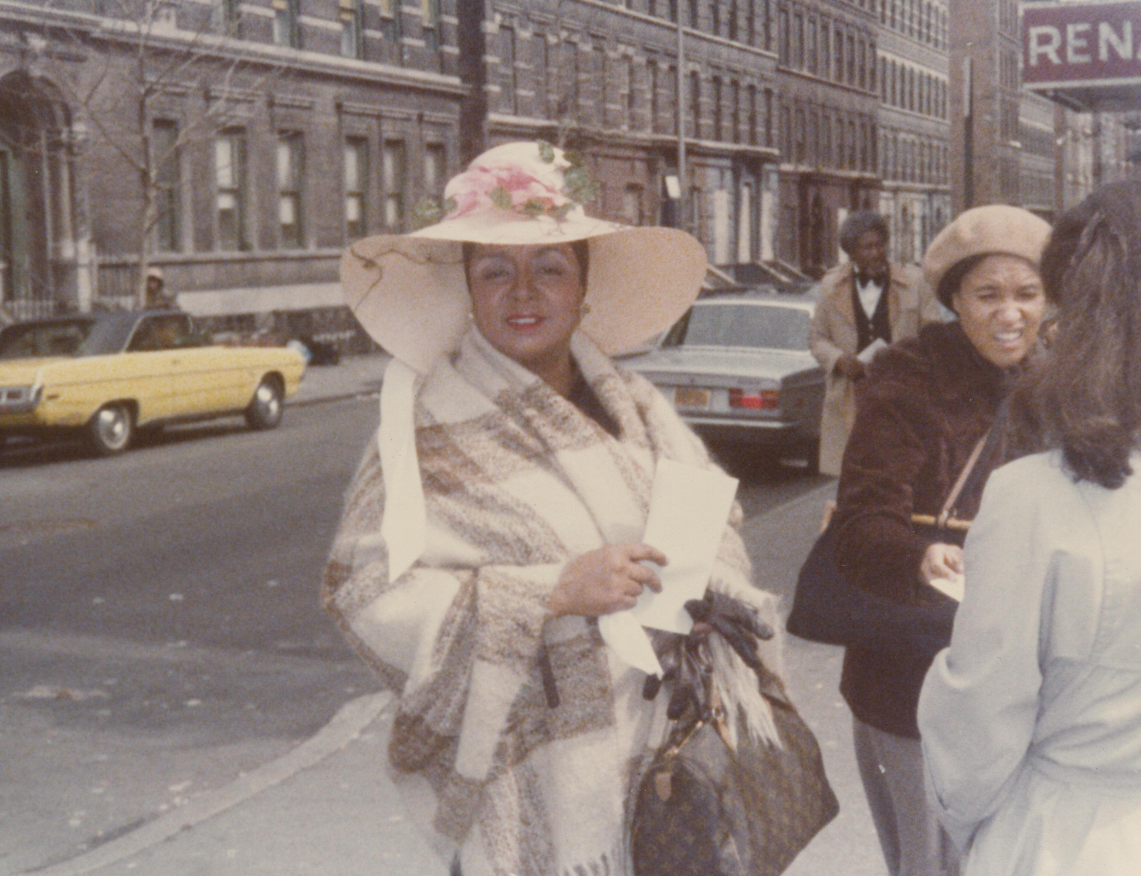 Scott after returning to the U.S. Family photo. Music Division.

But she seemed more at peace now, more settled with how her remarkable life had evolved. The heyday of jazz might be remembered fondly, but it had been a rough way to make a living, filled with the perils of alcohol, drugs, long road trips and broken relationships. Of all the people she considered family – her mother, Tatum, Waller, Holiday – none lived past 47. It was often like that at the top of the jazz world. Clifford Brown died at 25, Bix Beiderbecke at 28, Charlie Parker at 34, John Coltrane at 40, Bud Powell at 42, Nat King Cole at 45, Bill Evans and Billy Strayhorn both at 51.

If she wasn’t at the top anymore, then so be it. She had made it through her roughest years and setbacks.

“Bitterness was not part of her package,” says Karen Chilton, Scott’s biographer. The writer/actress spent years researching “Hazel Scott: The Pioneering Journey of a Jazz Pianist from Café Society to Hollywood to HUAC.” “There may have been a sense of longing, of frustration after she came back, of ‘Where do I fit in?’ But she loved music so much, she loved jazz so much….she never stopped playing.”

She recounts Mike Wallace, the famed CBS News journalist, remembering Scott at her funeral this way: “She was gregarious. And sweet…she really lived.” 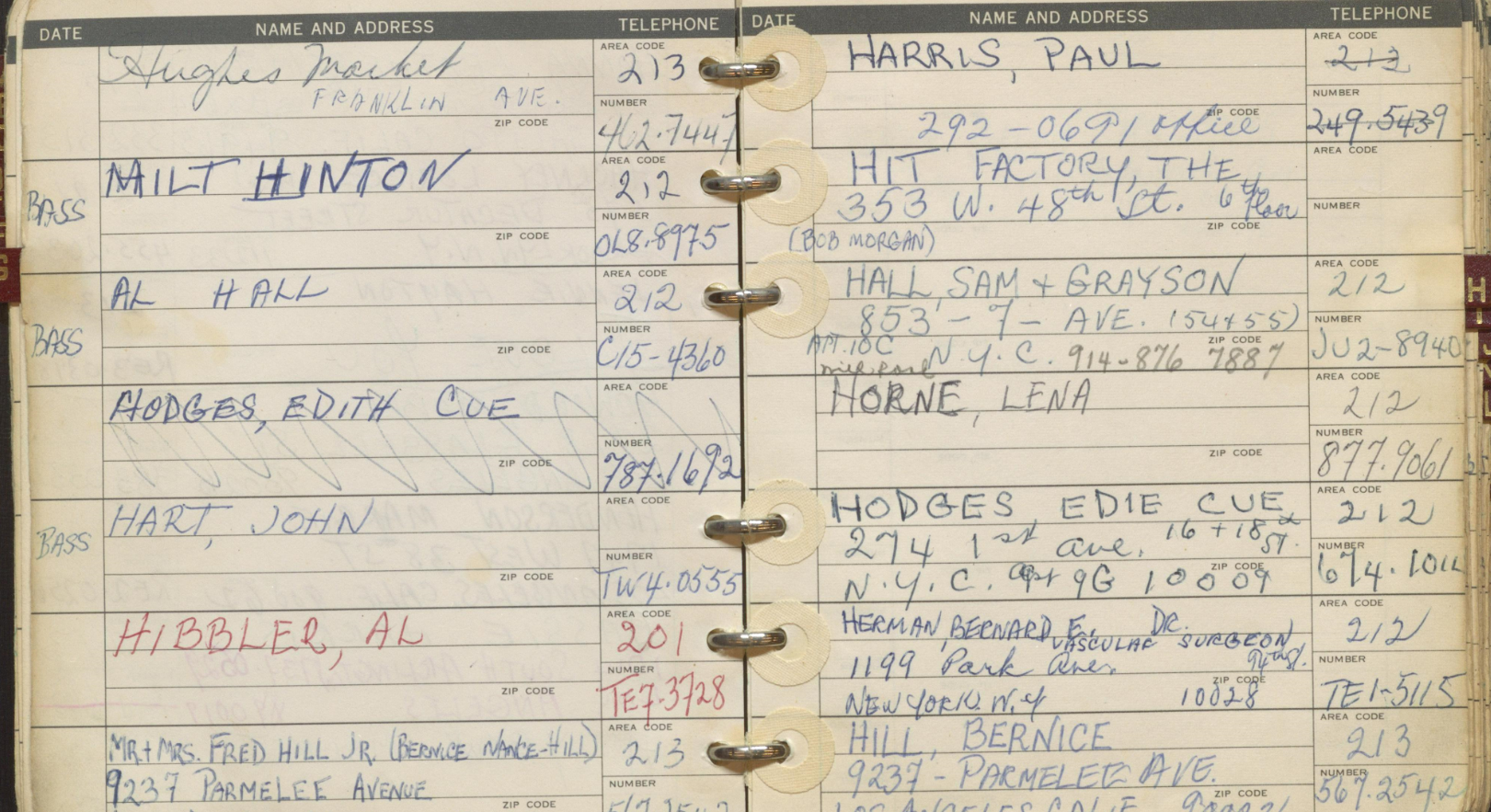 Scott’s address book lists her famous friends alongside everyday contacts. Milt Hinton, Al Hall, Al Hibbler, Paul Harris and — of course — Lena Horne were jazz stars. Sam and Grayson Hall were a television and film couple, both known for the TV classic, “Dark Shadows.” Edith Hodges was the wife of Johnny Hodges, the legendary jazz saxophonist. The Hit Factory, a famed New York recording studio, was at this location from 1975-1981. Music Division.