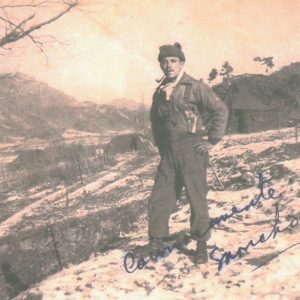 Ramon Viera on the battlefield during the Korean War. He was a member of the 65th Regimental Combat Team, a Puerto Rican unit.

As we celebrate National Hispanic Heritage Month through October 15, the Veterans History Project (VHP) continues to recognize the contributions of Hispanics and Latinos throughout the military history of our country. Hispanic and Latino Americans have fought in every war that VHP documents, and their achievements are profound.

However, the history of Hispanic and Latino service in the United States military includes struggles as well as triumphs. For example, during World War I, not long removed from the Spanish American War, Hispanic and Latino soldiers were heavily discriminated against and often denied the opportunity for any jobs except menial labor. Still, those who chose to serve their country fought bravely despite their unfair treatment.

During World War II, Hispanics and Latinos served in every major battle of the war. General MacArthur called the 159th Regimental Combat Team, a majority Hispanic and Latino unit, “the greatest combat fighting team ever deployed for battle.” One of the most decorated units of World War II was the 141st Infantry Regiment, which was made up entirely of Spanish-speaking soldiers. One of those soldiers was Lawrence Caccese, whose VHP interview can be heard here.

During the Korean War, the 65th Regimental Combat Team, a Puerto Rican unit known as the Borinqueneers, was awarded the Presidential Unit Citation and the Meritorious Unit Commendation. General William Harris, Commander of the 65th Infantry, said of the Borinqueneers:

No ethnic group has greater pride in itself and its heritage than the Puerto Rican people. Nor have I encountered any that can be more dedicated and zealous in support of the democratic principles for which the United States stands. Many Puerto Ricans have fought to the death to uphold them. 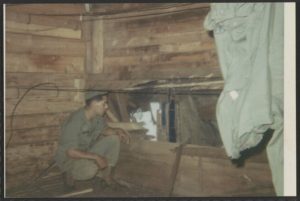 Arthur Baltazar inspects damage to his barracks by a mortar during the Vietnam War.

One of those soldiers was Ramon Viera, a mortar sergeant who rescued a 4-year-old child after the child’s mother was injured by a bomb. Hear his full story and access his photo album here.

Eighty-thousand Hispanic or Latino Americans served in the Vietnam War, and 13 of them were awarded the Medal of Honor for that conflict. While he did not earn a Medal of Honor, Arthur Baltazar earned multiple Bronze Stars for his actions in Vietnam. Baltazar shares his story, including his struggles with post-traumatic stress disorder, several photographs and a handwritten letter to President and Mrs. Obama here.

When the Vietnam War ended and the U.S. military returned to being an all-volunteer force, the number of Hispanics and Latinos who served did not diminish. In fact, it was quite the opposite—by the end of Operation Iraqi Freedom in 2011, 12 percent of the entire United States armed forces were Hispanic or Latino, and nearly one-fifth of the U.S. Marine Corps identified as such. Nearly 50 percent of all enlisted women in the military today are Latinas. Nilsa Bibiloni served as a senior chief in the Navy and deployed to both Iraq and Afghanistan. Here she shares her story of service aboard the USS Kitty Hawk.

Hispanic and Latino Americans have distinguished themselves in the U.S. military for as long as our country has existed. The Veterans History Project is proud to archive the oral histories documenting their stories, their struggles and their victories.

If you are a Hispanic or Latino veteran who would like your story of service archived here at the Library of Congress, contact us at [email protected]. And if you were already planning to submit an interview, don’t forget to self-identify as Hispanic or Latino on our biographical data form—it’s the only way we can know and honor your heritage!

To learn more about the Library’s observance of National Hispanic Heritage Month, visit our 2017 portal.