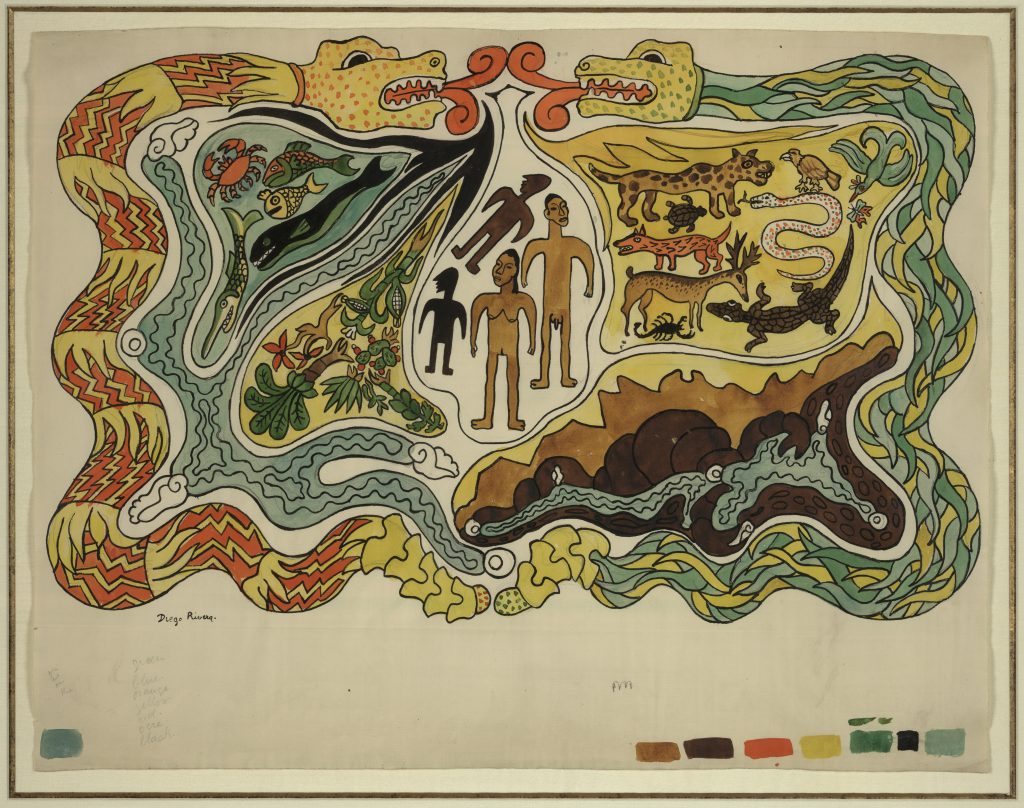 This is a quest post by John Hessler, curator of the Jay I. Kislak Collection of the History and Archaeology of the Early Americas at the Library of Congress. He describes research and analysis he conducted with Tana Villafana and Meghan Wilson of the Library’s Preservation Research and Testing Division and Stephanie Stillo of the Rare Book and Special Collections Division.

“The Creation,” by Diego Rivera, depicts two snake gods surrounding man, as told in the Maya creation myth, “Popol Vuh.” The work is watercolor and gouache on paper.

Diego Rivera (1886–1957) was by all measures one of the most important Mexican artists of the 20th century. His large-scale murals in cities like San Francisco, Mexico City, New York and Detroit transformed the style of public art across the U.S. and Mexico and brought transformational ideas from artists of the Parisian avant-garde to the Americas.

At the start of the 1930s, while Rivera was working in San Francisco, he started a project that was unlike much of his previous work. Long fascinated by ancient indigenous cultures of Mexico and Mesoamerica, Rivera was approached by the American writer and art critic John Weatherwax about doing a series of illustrations for an English translation of the Maya creation myth, the “Popol Vuh.”

Although Weatherwax’s translation was never published, Rivera completed a series of watercolors and gouache paintings to illustrate the text. Largely unknown to art historians and the public, three of the watercolors are part of the Library’s Jay I. Kislak Collection. 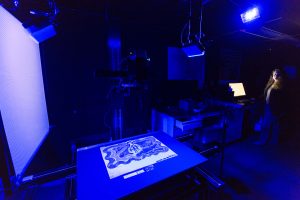 Because of their rarity and cultural uniqueness, a team of us – two curators and two scientists – recently decided to draw on advanced imaging and analysis tools available at the Library to gain a better understanding of the watercolors, both for art historical purposes and to inform the Library’s conservation of the paintings. Our work has uncovered intriguing details about Rivera’s technique and materials.

Before I explain, let me tell you a little more about the “Popol Vuh.” One of the great ancient creation stories of the indigenous peoples of the Americas, it narrates in poetic language the origins and history of the K’iche Maya from their beginnings in mythological time to around 1550.

Having its literary origins deep in the highlands of Guatemala, the “Popol Vuh” is thought to have been first transmitted orally, and perhaps later written down using Maya hieroglyphs, before being transcribed phonetically into the K’iche language by the Dominican priest Francisco Ximenez in the early 18th century. It is from Ximenez’ single surviving manuscript that all modern versions descend.

Rivera’s “Popol Vuh” paintings are smaller, less political and much more intimate than his large-scale public murals and show a stylistic sensibility that stems from Rivera’s studies and collecting of pre-Columbian art – the three watercolors appear to derive at least some of their general layout, color palette and themes from early Mesoamerican books or codices. Two of the Library’s paintings come from the early part of the book, called the “Creation” and “Trials of the Hero Twins”; the third depicts a later scene of human sacrifice before the fire god, Tohil.

To analyze works of art like the Rivera paintings, it is usually best to employ nondestructive methods. With that in mind, we selected three different techniques to examine Rivera’s underdrawings and the paints and pigments he used.

The first, hyperspectral imaging, involves digitally photographing an object at multiple wavelengths spanning the ultraviolet through the visible and into the near-infrared. Discrete components in an object – inks, glues, parchment – respond in unique ways to the different wavelengths.

Following imaging, we use software programs to analyze the mounds of data generated, which makes it possible to emphasize certain components in a painting while diminishing others. To help us perceive and interpret the findings, we apply unique colors to components that respond to light in the same way. The computer-derived colors we use do not represent anything in themselves – they simply show common areas of response to the various wavelengths used in hyperspectral imaging. 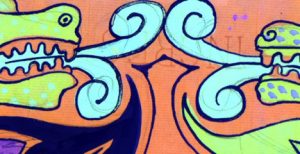 A segment from “The Creation” following hyperspectral imaging and application of computer-derived colors reveals Rivera’s underdrawings and the watermark of the paper he used, which are impossible to see on the originals. Imaging and analysis by Meghan Wilson.

To get a more precise sense of the paints and pigments Rivera used, we drew on a second nondestructive method: fiber optic reflectance spectroscopy (FORS). It is a simple but powerful instrumental technique that uses a white light source and a spectrometer to measure the amount and the color of light that is reflected from an object. Light that is not reflected from the object has been absorbed, and many materials have unique absorption patterns. For example, using FORS on Rivera’s “The Human Sacrifice,” we detected the reflectance spectrum of Cobalt Blue, one of the pigments he favored.

The third technique we used, X-ray fluorescence spectroscopy (XRF), is more complex and is widely used to analyze chemicals and elements in art historical and archaeological objects. It bombards them, nondestructively, with high-energy X-rays in multiple precisely defined locations, inducing elements in an object’s pigments to emit secondary X-rays that can be captured and analyzed. 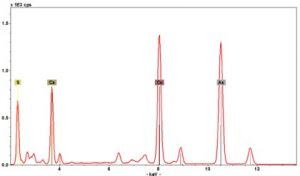 XRF analysis of a segment from “The Creation” revealed that one of the paints Rivera used, Paris Green, is composed of copper and arsenic, making it toxic. Analysis by Tana Villafana.

Our analysis is continuing, but preliminary results – to our surprise – show that Rivera’s three “Popol Vuh” paintings are made up of very different pigment and paint palettes. Why Rivera, who worked on the series over a limited time, would have used modern paints on one painting and then switched to more organic paints on another for the same color remains a subject of study and an open question.

As our team of curators and scientists continues to explore the “Popol Vuh” paintings in coming months, we anticipate even more surprises. But, already, the project has made clear the new knowledge that can come about when scientists and curators work together to better understand the Library’s collections.

As for our users and patrons, we hope our work amply demonstrates that both the sciences and the arts are full of hidden surprises. For now, scroll down to view Rivera’s renderings of “Trials of the Hero Twins” and “Human Sacrifice Before Tohil.” 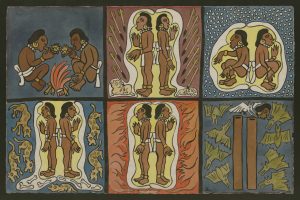 “The Trials of the Hero Twins,” watercolor and gouache on paper. The main characters of the “Popol Vuh,” the hero twins Hunahpu and Xbalanque, are subjected to trials in the underworld from lances, cold, tigers, fire and bats. 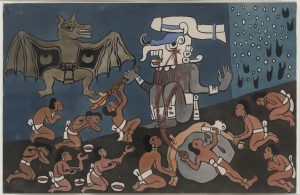 “Human Sacrifice Before Tohil,” gouache on paper. Tohil, the deity of fire and the source of warmth, demanded human sacrifice from the Maya who likened the god’s want of blood to an infant getting milk from its mother.