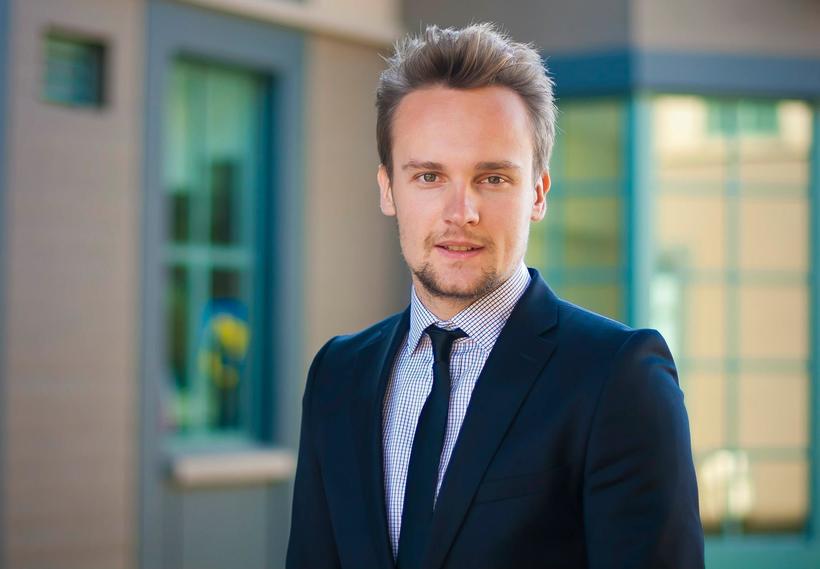 A boy in Belarus dreamt of living near the Golden Gate Bridge. Little did he know that his travels would take him from being a dishwasher to a startup founder in San Francisco.

This article is part of the I Am an Immigrant article series in honor of Immigrant Heritage Month.

[KC]: Tell me about yourself.

[KI]: I came from Belarus, a [country that formed after the Soviet Union collapsed] in 2008. Since then, I was able to go to community college and I was able to transfer to UC Berkeley. [I] studied Business there. After Haas Business School, I went to work for Deloitte Consulting. I did technology consulting there for two and a half years. Just recently, about two months ago, I quit my job. Again, it was a big risk and big step for my future life path that I decided to work on my business. I’m starting an e-commerce business selling stuff online. Photography is one of my biggest passions. That’s partially why I quit my corporate job. I wanted to focus on something I enjoy long-term. I was doing interesting work at Deloitte. We were doing Internet of Things implementations with cutting edge technology. [But I wanted to] do something where I can apply my photography skills.

[KC]: Why did you come to the United States?

[KI]: When I was still very young, about 10 years old, I had a dream/vision based on this movie that I [would] be studying at a prestigious university somewhere abroad. I had a very particular vision from the movie that [this] was kind of my dream future. I had no idea how I was going to get there. I always kept that idea in my head and tried to do whatever I could to make it happen.

Before the United States, I did try to [go] to England… I spent a summer there but I realized it was not exactly what I was looking for.

[KC]: Did you have the same sense of purpose in the United States of what you wanted to accomplish as when you were in England? … As an example, did you want to start your company? What was your general impetus for going to the United States?

[KI]: [I] definitely did not have a very defined goal of starting a company, per se. Maybe now I do, but back then, it was a more general idea. I wanted to be in a place where I have more opportunities to do things, to try new things; to meet new people. Living in Belarus, you definitely did not have that level of exposure to the variety of [opportunities]. … I felt like I was missing out. [I wanted to] access that kind of think tank and that kind of pool of opportunities. There are probably ways to do it staying in Belarus, but I thought [immigrating was a clearer path].

[KC]: You mentioned that there was a movie that led you down the vision of immigrating and going to Berkeley. Do you remember the name of the movie?

[KI]: The movie was called Boys and Girls. I watched it in Russian translation. I was about 10 years old. It was an American movie. I knew pretty much nothing about the United States [except where it was on a map]. I didn’t know anything about the culture or what university [was in the movie]… I was very surprised and shocked when I told the same story to one of my friends while I was at Berkeley… I [told her I only remembered] one big iconic thing from the movie [this big red bridge from the movie which was] the Golden Gate Bridge. “I’m here. My life dream happened…”

“She went back home and watched the movie… [she told me that] the boy and girl from the movie were also UC Berkeley students. I was speechless for a few moments because I only found out about it while I was already a [student there]. … When I re-watched it again, I literally almost cried. … I knew exactly the streets they were on. I was doing the exact same things they were doing. I don’t think it was a coincidence.”

[KC]: It was not a coincidence?

[KI]: I don’t think it’s a coincidence. I think it’s some kind of a greater universal force driving our lives. [By] projecting our minds into the universe and into the future, we’re attracting the things that we think about—both negative and positive. That’s why they say it’s so important to remove all the negativity from your life, because they attract …[other] negative things in your life.

[KC]: Would you be comfortable sharing your story about the political activity you had in Russia?

[KI]: Up until now, Belarus is considered a dictatorship regime. The president has been president since the Soviet Union collapsed in 1991. Even in the constitution, the president [like in any normal country] is not allowed to serve a certain amount of time. He was able to change the constitution. He was able to “ask” people to change the constitution. A lot of people know that the elections and any kind of voting is rigged. … He can serve as long as he wants. He pretty much has full freedom to power and access in the country as he wishes to have… If you meet someone from Belarus, it is quite common for them to have political asylum…

While I was studying in school, I was in participating in some opposition activities through drawing cartoons showing how the government operates, that it’s all [a] kind of illegal activity and how we should all stand up against it … I was expressing [this sentiment through cartoons and distributing them] among students around my school.

[KC]: And you were in high school at the time?

[KI]: No, that was at the university. [I was] studying there for a few years, and then I dropped out. That’s when I came to the United States.

[KC]: You were distributing these cartoons, and then what happened?

[KI]: A few times, I was detained at political rallies and got physically abused a little bit—nothing too crazy, but [I was] detained a few times. That was enough evidence for me [to] prove that it was a danger for me to go back home. When I came here, I had to build my whole case around why I filed political asylum… They would ask you in many different ways the events you described in the past. They want to make sure you’re not lying. They want to make sure your story is consistent. … Usually people hire lawyers for this process because you don’t know the right way to collect the documents and evidence. I in fact did it all myself… I only hired an interpreter just in case I didn’t understand something. That was my first year when I was in the United States. I didn’t speak English as well [as I do now]… When I share that with anyone else from Belarus who went through a similar process, they’re all kind of surprised that I was all able to accomplish [that].

[KC]: That must have been nerve-wracking.

[KI]: Yeah, definitely! … There’s a good psychologist to hear your story and make sure you’re not lying. They’re there …to read your body language and understand your case, understand everything about [your] culture. It’s kind of a big deal for them to grant asylum to a person, to basically eventually give all the rights a citizen has. So they have to be very careful with whom they give it to.

[KC]: How long have you been in the United States?

[KC]: After drawing the political cartoons, did they ever threaten you?

[KI]: [There are multiple mechanisms how the government can threaten you or your family. Some of them can include job loss (the government controls most jobs in the country), getting into prison for drug dealing (there are known cases when police would imitate that they found drugs in your house during a search), or issuing a large fine.]

Serving in the army is kind of an obligation for all of the younger male citizens. There are a few exceptions [when] you don’t have to serve. One of them is if you’re a full time student or [have] some sort of medical condition that prevents you from serving in the army. In fact, I had both. After I left Belarus, I would be getting those letters to say that I have to…