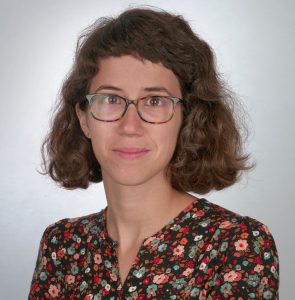 This is a guest post by Ena Selimovic, a winner of this year’s National Collegiate Book Collecting Contest, which recognizes outstanding book collecting by college and university students. The Library co-sponsors the contest with the Antiquarian Booksellers’ Association of America, the Fellowship of American Bibliographic Societies and the Grolier Club. Selimovic is working on a Ph.D. in comparative literature from Washington University in St. Louis. Here she answers a few questions about her love of books and her collection.

How did you come to be a book collector?
Stories have always been central to my family. My mother wanted to study literature in college, although she ended up studying biology. My brother was also an avid reader of fiction and, later, social and political theory. In the 1990s, as a result of the war in the former Yugoslavia, my family became refugees, and I found myself learning my third language before I turned 10.

My collection attests to this multiplicity of cultures, languages and life experiences – and the narratives that manifest the many combinations of the three.

Tell us a little about your collection.
I have more than 1,000 books now. When I first started collecting, I never imagined I would run out of room, but I am. At my parents’ house in St. Louis, I recently alphabetized my bookshelves to get a better sense of what I have there. I still live in St. Louis, so I can easily access those books during odd days of dissertation writing when I have this impulsive thought that I need a certain book, and I need it now, and I own it, margin notes and all, and it’s sitting on a shelf 20 miles away.

Some of the subject matter relates to courses I have taken or taught: literary modernities in Europe and America; children’s literature of the Holocaust and the Third Reich; first-year composition; introduction to comparative literature. The main collection at my own place relates more specifically to my dissertation project and to subjects I will always be interested in: minority discourses, nationalism, colonialism, critical race studies, narrative theory, humor.

When did you first begin collecting books?
In my junior year of high school, to the dismay of my mathematics teachers, it became clear I would be pursuing literature in college. “Pursue” seems like the pertinent word here, as reading and writing (with the exception of spelling) had not come easily for me, especially after the challenge of learning English. By this point, I had not only pursued Camus, Kafka, Atwood, Dostoevsky and Coetzee; I had also committed to being thorough and read all their works (often translations into English).

I wanted to convert my bedroom into a reading room, so I accumulated bookshelves and replaced my bed with a wide sofa I could sleep on. At the same time, I began to supplement trips to the library with buying books I saw myself rereading or talking about in the future. I became a very thorough reader, taking copious margin notes and recording favorite excerpts into a separate notebook – something that proved useful during my doctoral comprehensive exams a decade later, though I did not have this foresight!

I think I always had the urge to try not to forget, beginning early on with journaling in elementary school through my first years of graduate school. Reading and journaling became an ideological, existential way for me to understand and to reflect in the mode of the books I had been reading. The books I gravitated toward were most often about war, migration, multilingualism, “alienation,” colonialism and so on.

I also wanted to track my own development. I distinctly remember the point at which I decided to own all the books I had ever read, to see how far I had gotten in my reading comprehension, partly out of pride and partly out of a need to understand why things tend to turn out the way they do for so many people (the omission often being that they tend to turn out poorly). Another part of this desire was linked to the fact that my mother had lost all her books during the war. When I visited Bosnia during the summers, I would buy contemporary editions of the books she used to read.

What are some of your favorite books in your collection?
This is my favorite question, and one I always struggle to answer concisely! I can cheat by saying: anything by Flann O’Brien, Toni Morrison, Virginia Woolf, Adam Phillips or James Baldwin. Add Junot Díaz’s “The Brief Wondrous Life of Oscar Wao.” Or Anita Loos’ “Gentlemen Prefer Blondes.” And Tillie Olsen’s “Yonnondio,” Salvador Plascencia’s “The People of Paper,” Aimee Phan’s “We Should Never Meet.” In English translation, my favorite books are Dostoevsky’s “Notes from the Underground,” Kafka’s “Metamorphosis” and Cervantes’ “Don Quijote.” In Bosnian/Croatian/Serbian, they are Miroslav Krleža’s “On the Edge of Reason,” Danilo Kiš’ “The Encyclopedia of the Dead” and Dubravka Ugrešić’s “Ministry of Pain.”

I’m proud of how many languages are represented in my collection, and that Bosnian/Croatian/Serbian is there among English, French, German and Spanish. Many languages get sidelined as irrelevant, unimportant, even antithetical to our conception of the literary canon, and I take pride in highlighting translation and the construction of this hierarchy among languages and literatures. As wars target people, they target their languages and cultures, and I take pride in the fact that these books have not been obliterated, though much else has.