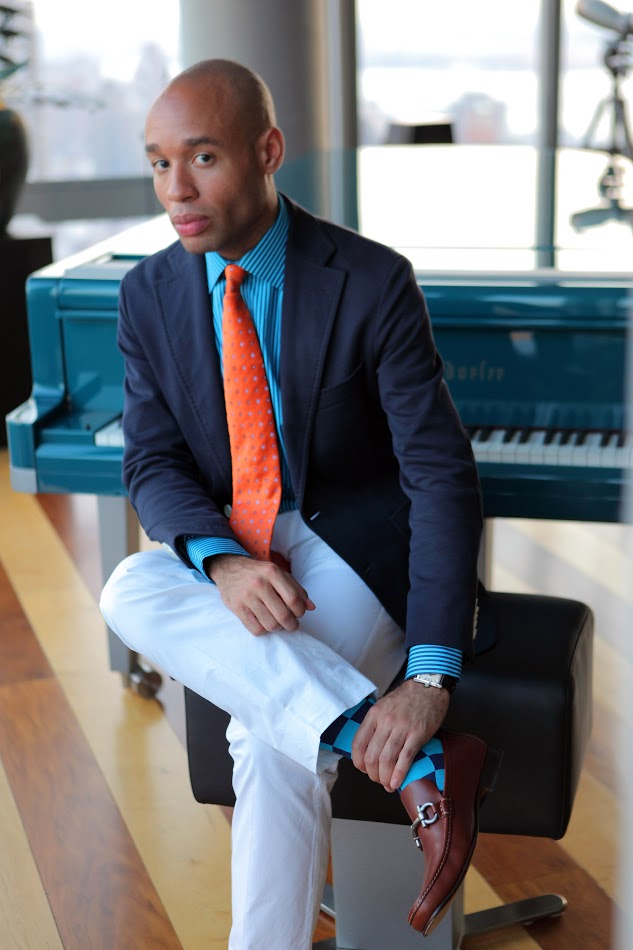 Aaron Diehl is the most recent virtuoso to play the Coolidge Auditorium as one of the Library’s 2018-2019 Jazz Scholars, taking the stage March 23. He also spent some time researching the archives.

The 32-year-old has put together a stellar career, leaping into the spotlight by making the finals of the Jazz at Lincoln Center’s Essentially Ellington competition when he was 17. His rolling, New Orleans-inflected chops, mixed with classical scholarship, caught the attention of Wynton Marsalis. Diehl, born in Columbus, Ohio, was the grandson of a pianist and started studying classical piano when he was seven. After Marsalis took note of him, he studied at The Julliard School, learning under heavyweights such as Kenny Barron and Eric Reed. In 2011, he won the American Pianists Association Cole Porter Jazz Fellowship — $50,000 and a recording contract.

He’s recorded four albums, the most recent of which is “Space Time Continuum” (2015), and his career continues to blossom.

We caught up with him as his research at the Library was wrapping up, a few days after his concert.

The term “jazz scholar” almost sounds like a professorial term, which I suppose is fine if we’re talking about Professor Longhair. How did you decide to use your time at the Library, what to look up, and what to dive into?

I had visited the Library of Congress for the first time at the end of 2016, when I was preparing for a touring program called “Jelly and George,” featuring the music of George Gershwin and Jelly Roll Morton. Larry Appelbaum was gracious in giving an introduction to the collection of both composers, but with my schedule in D.C. being limited to a few hours, I could barely scratch the surface. Fast-forward to my formal visit as a “jazz scholar” and it was even more overwhelming because I had two days of tours by various curators. Some of the highlights:

This was a general overview of the entire library, which gave me the chance to understand more about the scope of the collections so I can return for specific research.

Mozart and Beethoven: In looking at their scores, as a working musician now, what strikes you as most different (if anything) about how they worked and composed then?

I’ve seen facsimiles of Mozart’s scores. Very clear and neat. Same with Gershwin—you could basically hand those manuscripts to a musician and they could read it right off the page. Beethoven is another story. The sketch of Op. 109 was barely legible, and in final version I could maybe read the first 4 bars. Genius comes in all forms. He was the greatest of them, no doubt.

What were the surprises? What touched you the most?

The Guttenberg Bible. That changed the game for the dissemination of written text, sacred and otherwise.

Early jazz is mythologized so much. It’s easy to do, because the music is so fresh, so original. What parts of that music, those traditions, do you pull on in your own playing?

What first drew me to the music of early stride pianists like James P. Johnson, Luckey Roberts, et al, is the feeling of their left hands against a syncopated right hand. I somehow try to incorporate an underlying sense of momentum and groove in my own playing, even if it isn’t directly tied in to the stylistic language of early American piano.

“Wow” is right! And it’s in good condition!

You’ve played with a lot of great musicians, including Benny Golson. How does playing with a legend like that affect your performance when you’re on stage with him, if at all?

I really feel a connection to the ancestors playing with someone like Mr. Golson. I have only played with him a handful of times, but hearing that signature tone coupled with his illustrative stories about writing tunes like “Stablemates” and “Along Came Betty” is a priceless experience. That’s becoming more rare as great masters are leaving. On stage, I just try to take in the moment and learn as much as I can on the bandstand.

Lastly: It’s a Sunday afternoon. You’re by yourself, the piano is just over there. What would you be most likely to sit down and play?

Whatever comes to mind. Sometimes that’s just free improvisation. Exploration is the first step in creating structure for my practice routine.