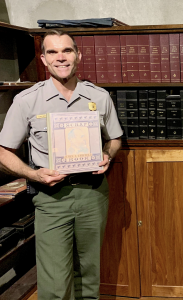 Alan Gephardt holds a reproduction of one of President Garfield’s scapbooks. Photo courtesy of the Garfield National Historic Site.

What does your job entail?

My principal duty is to explain the life and career of James A. Garfield to the public. This involves giving tours of the Garfield home, giving talks at the local library and other nearby venues and writing blog articles relating to Garfield and his times. These duties require reading and research.

What is your background?

I have always been interested in U.S. history and presidential history in particular, so working at the Garfield site has been very gratifying. I am a native of Maryland and have a bachelor’s degree from Towson University and a master’s degree from the University of Maryland Baltimore County. I have worked in the museum field since 1990, mostly in Baltimore. In 2007, I became an employee of the National Park Service. I have worked at the Hampton National Historic Site in Towson and the Fort McHenry National Monument and Historic Shrine in Baltimore. I started at the Garfield National Historic Site in 2009.

Tell us about your research at the Library.

My most recent Library project was creating facsimiles of the leather-bound volumes of the president’s papers, now held in the Library’s Manuscript Division. They originally resided in a fireproof vault in the memorial library at the Garfield home in Mentor, Ohio. Mrs. Garfield built the library onto the house in 1885 and called the vault the Memory Room. She had the papers organized topically and chronologically and bound in red, green, black and brown leather with gilded lettering and designs. The collection consisted of more than 200 volumes of letters, scrapbooks, bound newspapers, diaries, plus military and academic records. In 1931, the Garfield children began to donate the collection to the Library.

Recently, I started a project to re-create the bindings for display at the Garfield site. Facsimiles of the originals, I thought, would give visitors a better sense of the extent of Mrs. Garfield’s effort to lovingly preserve her husband’s papers.

I contacted Michelle Krowl of the Manuscript Division for permission to measure a selection of 70 of the volumes, making notations on the wording and designs on each spine. Initially, I had the privilege of performing this task in the Manuscript Reading Room over several visits, but then Michelle and I worked together one day and knocked out the task of measuring and transcribing. With all of this information in hand, I worked with the Cleveland-based Esper Bindery to make the facsimiles that now fill two full shelves in the Memory Room, with a little spillover onto another shelf. Everyone who has seen them has been well pleased with the result.

How else have you used the Garfield papers?

I first began visiting the Library in 2014 to use of the papers of Lucretia Garfield, President Garfield’s wife. I was particularly interested in the many condolence letters that she received in the wake of her husband’s death by assassination — hundreds from people from all walks of life in the U.S. and overseas. I drew on the letters and Mrs. Garfield’s papers for public presentations. But the papers also led me to an unexpected discovery. About two years ago, I stumbled on correspondence with the Wooton Desk Company of Indianapolis that revealed the origins of the secretary desk in the memorial library of the Garfield home. The correspondence made it clear that Mrs. Garfield had the desk made in 1882. Nothing much had been known about it before then. Without the opportunity to consult Mrs. Garfield’s papers, this intriguing, though admittedly minor, bit of the Garfield story would not be known.

How would you describe the value of the Garfield papers generally?

Obviously, the papers of President Garfield, and those of his wife and children, also preserved at the Library, are a resource of immense value to those of us who work at the Garfield National Historic Site and, by extension, to our visitors. They provide so many insights into Garfield’s personal and professional relationships, the issues with which he contended, the cultural currents of his day and the lives of his wife and children after his tragic death. Since the Library made the papers available online this summer, I have looked at reminiscences of Garfield’s older brother, Thomas, about Garfield; the correspondence of one of Garfield’s secretaries, George Rose; and some of the diaries of Garfield’s mother. In every case, something has been revealed that adds context to my understanding of Garfield’s life. The entirety of the Garfield papers is an invaluable asset to the National Historic Site and to the American public.