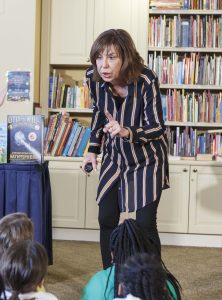 Barb Rosenstock talks with students at the Library on Dec. 10. Photo by Shawn Miller.

Barb Rosenstock writes children’s book about people who have changed history — Ben Franklin, Theodore Roosevelt, Joe DiMaggio and racing legend Louise Smith among them. “The Noisy Paint Box,” her story about the artist Kandinsky, was a 2015 Caldecott Honor Book. In 2013, she published “Thomas Jefferson Builds a Library” about Jefferson’s massive book collection, which he sold to Congress and from which the Library of Congress evolved.

Rosenstock’s most recent book, “Otis and Will Discover the Deep: The Record-Setting Dive of the Bathysphere” — about a pioneering 1930 ocean dive by Otis Barton and William Beebe aboard a craft they invented — also has interesting ties to the Library. Just this month, the book won a Golden Kite Award from the Society of Children’s Book Writers and Illustrators.

Here Rosenstock answers a few questions about her writing and research.

Tell us a little about your background and how you became a children’s writer.
I was in corporate design management, worked as a stay-at-home mom and got a second degree in elementary teaching before I ever thought of writing for children. When my sons were young, they liked true stories but found a lot of the children’s history picture books at the time kind of like textbooks. I started making up stories the way my grandfather would tell a story to go with the pictures and the rest is … history (I couldn’t resist, sorry).

What draws you to historical nonfiction?
It is a goal of mine to communicate to children that there is no such thing as “special” people and “regular” people. After all, the young Ben Franklin or Dorothea Lange or Bill Monroe didn’t know they would grow up to accomplish great things. They were just kids who followed their interests and kept learning and growing and then wound up doing great things in history … which means any kid living today can do the same.

How did you decide on Jefferson’s library as a book subject?
I was at Monticello on my eighth-grade field trip (many, many years ago), and I thought Monticello and Jefferson’s study were perfect — I would have happily moved there if they would’ve let me. I never forgot the beauty of the place. Decades later, I read that Jefferson offered his personal library to rebuild the Library of Congress after the War of 1812 and thought “How did I not know that?” And had to find out. It’s always my own curiosity that gets me wondering, and I figure if I’m interested, hopefully kids will be! I researched at Monticello primarily but also at the Library of Congress — on the web page for Thomas Jefferson’s library and in person in the exhibit itself. I love that exhibit, and it’s cool that the Library will still find one of Jefferson’s books off and on. The search for Tom’s books continues!

What inspired you to write “Otis and Will”?
I ran across the word “bathysphere” and looked it up. Seriously, I had never heard of it before. The photo I saw of the craft and its inventors, Otis Barton and William Beebe, reminded me of the adventure cartoons I used to love as a kid (“Diver Dan,” “Clutch Cargo”). Otis and Will were two curious kids who became curious scientists and who had to know what the deep ocean looked like. Their curiosity led to their risking their lives to expand our knowledge of the oceans. Curiosity can take us to great places.

“Otis and Will” has several connections to the Library. Tell us about them.
The first connection was early in the research. I used the “Ask a Librarian” function on the Library’s website to see if there was any audio from the bathysphere dives at the Library. The librarian who happened to respond to my request was a woman named Constance Carter (the former head of the Library’s Science Reference Section) who proceeded to tell me that one of her first jobs after college was working for William Beebe in Bermuda doing ocean research! Connie shared research, videos and firsthand knowledge, gave a great tour of the Library and has been just such a joy to know as her curiosity about people and subjects knows no bounds. The second big connection was when I was at the Library on Dec. 10 to give a talk on “Otis and Will” for some third-graders from Washington, D.C. Before the presentation, I was introduced to Matthew Barton, Otis Barton’s great-nephew, who also works at the Library of Congress as a curator of recorded sound (he looks like his late uncle, by the way). The Library of Congress is simply full of Barton, Beebe and bathysphere connections!

What do you have to say to other writers about working with the Library’s staff and collections?
The Library of Congress is the largest library on the planet. If that doesn’t motivate a writer to use the Library, with its extensive digitized collections and its amazing staff as a resource, the writer probably don’t belong in research or writing at all!

Do you know yet what you will write about next?
“Yogi: The Life, Loves and Language of Baseball Legend Yogi Berra” will be published next month by Calkins Creek, illustrated by Terry Widener. Books I’ve already written on Frank Lloyd Wright, Alice Paul, Abigail Adams, Monet and monarch butterflies are all in process. My next new project will be either something to do with mountains (Mt. Everest? Denali?), or I may have a new idea about the sea. I hope the Library’s staff is ready for some more questions!