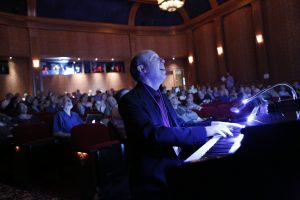 What we today call “silent” films were anything but in their heyday. Usually, a piano, a theater organ, a musical combo – or sometimes an entire orchestra – accompanied screenings. For more than 30 years, Ben Model has been bringing the music back to early motion pictures. A lifelong silent film enthusiast, he has created and performed live scores for hundreds of films, some as short as a minute, others as long as five hours. Since 2009, Model has been a resident silent-film accompanist at the Library of Congress’ Packard Campus Theater in Culpeper, Virginia.

Most recently, from June 13 to 16, Model performed at the Packard Campus’ 7th annual “Mostly Lost” film-identification workshop. It seeks to identify the many silent-era films whose titles and credits are damaged or missing because of neglect, decay or mishandling. Attendees – scholars, archivists, film enthusiasts – view films searching for clues to any identifying details to the sound of live music performed by Model or fellow accompanists Philip Carli and Andrew E. Simpson.

Beyond his work as a composer and accompanist, Model has collaborated with the Library of Congress to produce and publicly release on DVD silent films from the Library’s collections, two of which have aired on the TCM network, and to acquire films and videotapes for preservation.

Model is also a visiting professor of film studies at Wesleyan University and a resident accompanist at the Museum of Modern Art in New York. He has performed at theaters, museums, schools and other venues around the United States and internationally.

Here he answers a few questions about his background and his collaboration with the Library. Scroll down to the end of the post for examples of Model accompanying films.

What inspired your interest in silent film?
My folks tell me I discovered Charlie Chaplin on TV when I was a toddler. For some little kids, it’s trains or dinosaurs; for me, it was Charlie Chaplin. Until the cable TV era arrived, silent comedies were shown on TV. They were aired in the afternoon as kids programming, and they were on public television. There was a series in the early ‘70s called “The Silent Years” that aired on public TV. Produced by Killiam Shows, it featured the big classics in new restorations with excellent piano scores by William Perry. Like a lot of people my age, I saved up lawn-mowing and paper-route money to buy super-8-millimeter copies of silents from the Blackhawk Films catalog. Walter Kerr, The New York Times drama critic and author of the 1975 book “The Silent Clowns,” lived in my town and had a huge 16-millimeter collection. I used to go to his house, and he would show me silent comedies by Buster Keaton, Harry Langdon, Harold Lloyd and Raymond Griffith that weren’t available anywhere else.

How did you come to be a silent-film accompanist?
As a film-production major at New York University, I found that the silent films shown in the required “Film History 101” class were being screened without any music. This was the early 1980s, just before VHS, and so all film was shown in 16 millimeter, and those prints had no scores on them. It killed me that these films I loved were pretty much dying in front of a couple hundred film students every week. I’d been a pianist since I was a kid, and I wanted to help these great movies. My sophomore year, I went to the head of the film-studies department and volunteered to play for the silent-film screenings. I said to myself, “I don’t know what I’m doing, but it’s got to be better than nothing.”

I was playing for the basic film history class initially, and then also playing for university courses taught by the noted historian William K. Everson. I made a point of meeting everyone in New York City who accompanied silent films to get advice. I got help from Bill Perry at the Museum of Modern Art and in particular from Lee Erwin, who had been a movie-theater organist in the 1920s and who was still working.

At one point, I started shifting away from trying to work in film production and began focusing on silent-film accompaniment. It became the “what I do” in terms of my career, although I am slowly making my way back into filmmaking. Along the way, I’ve learned about the nuts and bolts of film programming, show production, publicity and social media and DVD production and distribution. The word I use for what I do now is “artrepreneur.”

Tell us about your work with the Library.
I have an agreement with the Library of Congress Motion Picture, Broadcasting and Recorded Sound Division to release co-branded silent films from the collection on DVD and Blu-ray. The project came out of my first DVD, “Accidentally Preserved,” a collection of rare and lost silent comedy shorts from prints made in the 1920s and 1930s that I owned. It was produced and released in 2013. I’d figured out a business model that combined crowdfunding and manufacture-on-demand. It was a wormhole I’d discovered that allowed me to connect film fans with lesser-known silents I knew they’d want to see, films that larger companies might not be interested in because of their extremely limited commercial potential. In my crowdfunding announcements, I tell fans that they can be part of the “somebody” in “Why doesn’t somebody put that out on DVD?”

How would you describe the value of silent films?
They’re important, now more than ever, in the sense that silent film is cinema’s original and pure form of visual storytelling. Because of easily accessible global video platforms, anyone on earth with anything from a smartphone to RED Digital Cinema equipment (or whatever format comes along next month) has the ability to make movies.

Cinema language was developed during the silent era, and a great deal can be learned about telling stories in a universal way from studying them. Silent films translate more easily around the planet than other types of film do. The lack of sound, color and real-time speed meant that silent films told stories of the human equation, the human experience, that anyone can relate to. That’s why they’re timeless.

You can show “Sunrise,” “The Gold Rush,” “Safety Last” or “Metropolis” anywhere, and people will have the same response. I show Keaton’s short “One Week” to school groups from Boise, Idaho, to Tromsø, Norway, every year, and the kids laugh the same way at the same gags every time. I played for Keaton’s “Steamboat Bill, Jr.” and Lloyd’s “The Freshman” to an audience of 3,000 in South Korea a few years ago, and the reaction was identical to that of any other audience.

What are a few of your favorite silent-era films?
I never know how to answer this question, because one of my favorite things is discovering great silent films I’ve never seen or heard of. Several years ago, I played for a series of silents at the Museum of Modern Art by the French director Julien Duvivier, and I loved them. How had I never heard of this director? Discovering the completely forgotten comedian-director Marcel Perez in the last few years has been a delight, and I’ve released two DVDs of his work through my collaboration with the Library.

The other thing for me is that I think like a programmer, and sometimes my favorite thing about a film is the audience I’m getting to show it to – whether it’s a bunch of kids at an education screening at the Museum of the Moving Image, residents of a senior-living facility or the folks who live in Culpeper, Virginia. I will say that one “desert island” silent for me, although it isn’t technically from the silent era, is Chaplin’s “Modern Times.”

What has your experience been like working with the Library?
I’ve really enjoyed collaborating with the Library of Congress’ Moving Image Section. I mainly work with Rob Stone, the moving-image curator, but I’ve gotten to meet and work with folks in the film and video lab, the nitrate vaults, film prep, projection, film restoration and more, and I’ve learned so much. The DVD releases I’ve worked on have meant that silent films that have been unavailable to the public since their initial release are now viewable to fans, and in quality editions. My association with the Library also led to my being able to help facilitate the Library’s acquiring the Ernie Kovacs and Edie Adams Collection a few years ago. I’m the archivist for the Kovacs-Adams material for Ediad Productions, and knowing that the videotapes and kinescopes of Ernie and Edie’s television shows are in good hands has meant a lot to me.

As of last month, my Undercrank Productions DVDs that are co-branded with the Library became more widely available, both in the United States and internationally. That means more fans are able to see rare films preserved by the Library that star Lon Chaney, Marion Davies, Marcel Perez and others whose work might otherwise still be sitting in cans on vault shelves. It’s a great collaboration, and symbiotic as well, and I look forward to what’s to come.

Below, listen to Model accompany “Spirit of ‘76” (American Mutoscope and Biograph Company, 1905) and The Immortal Voice (Bray Studios, 1923).