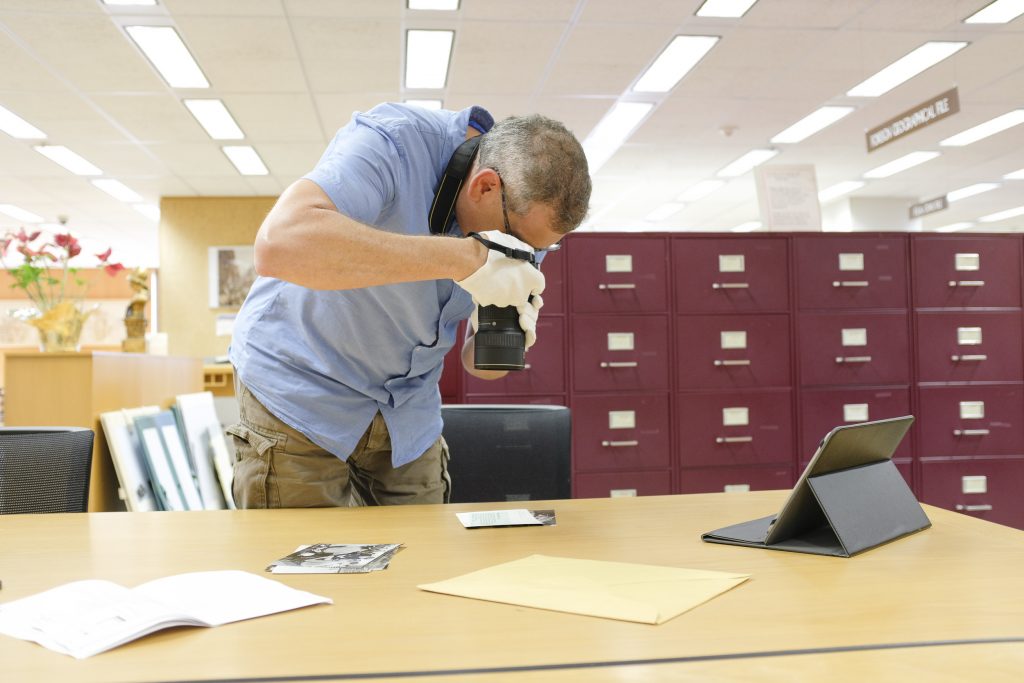 Robert Hanshew works in the Library’s Prints and Photographs Division in July. Photos by Shawn Miller.

Robert Hanshew visits the Library’s Prints and Photographs Division almost every Friday. Over the past two or so years, he has sorted through literally hundreds of archival boxes containing photographs related to U.S. naval history. On other days of the week, he can often be found at the National Archives. His goal: to find rare and interesting historical photographs for the new National Museum of the U.S. Navy.

Now located within the high-security Washington Navy Yard in Washington, D.C., the museum is complicated to visit for those who don’t have military credentials. Still in the planning stages, the new and much larger museum—it will be the size of about four football fields—will sit outside the security perimeter, offering more opportunities for public education through photographic exhibits.

Hanshew has curated photographs for the Navy for about 18 years. Most recently, he helped produce a major outdoor public history exhibit, “Behind These Walls,” consisting of nine-by-seven foot photographs highlighting the history of the Washington Navy Yard. The display sits along the yard’s historical perimeter and includes photographs Hanshew identified in the Library’s collections.

Here Hanshew answers questions about his research at the Library. 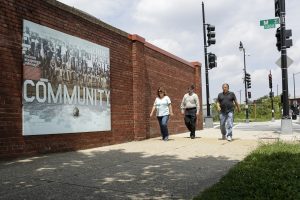 A 1935 photograph from the Library’s collection is the backdrop for a “Behind These Walls” exhibit panel titled “Community.” It sits along the exterior wall of the Washington Navy Yard.

Tell us a little about your research for the “Behind These Walls” exhibit.
The exhibit was done in conjunction with D.C.’s Capitol Riverfront Development to draw people to the Washington Navy Yard. The 11 panels were designed as quick, easy lessons on the various uses of the Navy Yard since its establishment in 1799. While performing research for this project, I found that the Library’s Prints and Photographs Division had some of the best-quality photographs—simple yet educational.

For the new naval museum, what kind of images are you looking for?
I am looking for images that might differ from the photographs that have been used for many years or be of better quality (richer tones and unscratched). I am also looking to identify images that have not been previously identified that could be used for exhibit purposes beyond the new museum. For example, we are currently doing an exhibit about the Battle of the Atlantic. I am going through photos of engagements of the Allies against German U-boats and identifying the submarines with help from National Archives records and other sources to tell a fuller and richer story.

What are some of your interesting finds at the Library?
The captions on the reverse side of photographs in the Navy and Marine Corps donated collections have been a revelation. At the National Archives, the photographs are mounted on a stiff cardboard that covers the captions, and the mount-card fronts usually have only one or two sentences. The information on the backs of photos at the Library helps me build better captions and offer more history, as names and proper dates are given. Another fantastic find at the Library are the educational tools the Navy used for training during World War II, including colorful naval aviation recognition tools used to help pilots identify U.S. aircraft from hostile planes. The images will make the basis for a wonderful exhibit at the new museum. 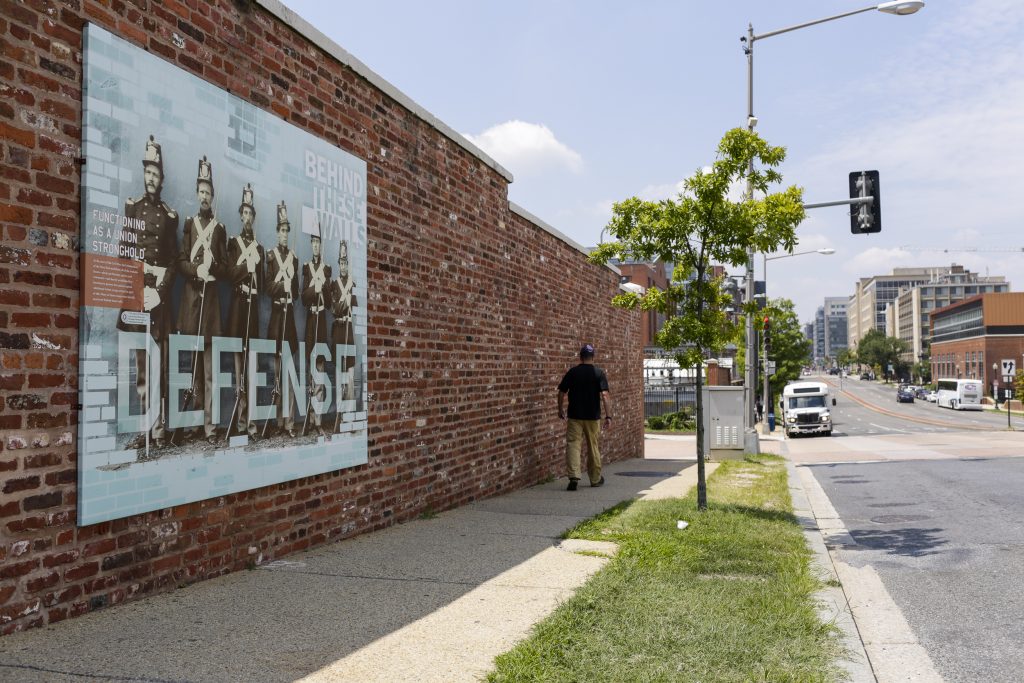 An 1864 Library of Congress photograph is the backdrop for a “Behind These Walls” panel titled “Defense.”

How do you document the photographs you identify for potential use?
I bring one of my best friends, my Nikon D80, to “photograph the photographs” and any relevant text. I then break down the photographs into war and nonwar eras that the Navy and Marine Corps have been involved in since the American Revolution. In our digital databases, they are further categorized by the exhibit’s chronology and additional subjects such as aviation, places, people, ships and weapons. I have gathered close to 30,000 images from the National Archives and the Library, along with images from our own archives. Staff and graphic designers will be able to choose from these images when the final design and construction process starts. I have now accrued close to 2,000 pages of referenced, photograph material from the Library and other D.C. repositories.

How did you come to be a Navy photo curator?
A Navy veteran, I was lucky enough to be stationed in London, where I went back to university and finished a history degree. Then I traveled to Dublin to study further. About 18 years ago, an artifact curator position opened at the Naval History Center. After some time, I began to deal with photographs and performed a wide range of outreach. When it came time to start work for a new museum, I was fortunate to be offered the chance to perform the mission of curating all the visual aspects of the exhibits.

Can you comment on your experience generally working at the Library?
Every trip to the Library has been a joy. I view my trips as a good chance to chat with others who do similar jobs and are also excited about my finds of the week. I am also appreciative that the staff goes above and beyond to help me find what I might be looking for. For example, there was one image I could not find for a “Behind These Walls” exhibit panel, and I left disappointed. The staff took it upon themselves to do more research and found the image. This project would not be as good as it is without the help I have received from the Prints and Photographs Division. For that, alone, my team and I are eternally grateful.