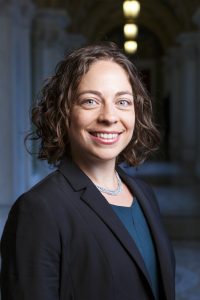 Carolyn Bennett teaches music at Wheeler Middle/High School in North Stonington, Connecticut. This year, however, she’s taking a break from the classroom — with the goal of adding to her instructional repertoire.

She is working with the Library’s Learning and Innovation Office as a teacher-in-residence, researching online resources at the Library that she and other teachers across the country can incorporate into the classroom. At the same time, she is contributing to a National Association of Music Education (NAFME) curriculum-development project that draws on digitized materials at the Library.

Here, Bennett answers a few questions about her experience at the Library.

Tell us a little about your teaching.
I teach students in grades 6 to 12, specializing in chorus, piano, guitar, theory and general music. My goal is to equip my students to be self-sufficient, musical people for the rest of their lives through listening perceptively, performing effectively and composing creatively. Pursuing these musical skills builds so many qualities that allow us to live full, human lives: cooperation, determination, innovation, confidence.

What inspired you to apply for residency at the Library?
Much of the repertoire I present to my students — folk songs from around the world, spirituals, pieces built on the 12-bar blues progression — is powerfully tied to the identity, history and viewpoint of its creators. Students need resources to make the context for these pieces come alive. Often, searching for resources would lead me to primary sources at the Library. I was intrigued by the opportunity to spend a year immersing myself and sharing my discoveries with music-educator colleagues.

Which collection items stand out to you so far?
Lowell Mason was an early proponent of music’s place in public education. In 1837, he became America’s first public-school music teacher. He jointly compiled “The Boston Glee Book,” a choral anthology for schools, which the Library holds. Many of the pieces charmingly address concepts that are still relevant in today’s music classroom. I can’t wait to perform “Come Sing This Round with Me” with my choir next year. By singing pieces from this anthology, students can directly participate in a historically American value: the belief that education, including arts education, is an important gift we freely give to the next generation.

In 1940, Irene Williams met with Ruby and John Lomax to describe her early years in slavery. In an audio recording in the collections, she recalls church services and sings a beautiful rendition of “Keep Your Lamp a Trimmed and Burning.” This is a piece my middle-school choirs have performed several times over the years. How powerful for them to hear it directly from a woman who survived slavery!

I have shared other gems through posts on the Teaching with the Library of Congress blog.

What is your involvement in the NAFME curriculum-development project?
Supported by a grant from the Library’s Teaching with Primary Sources program, the National Association for Music Education has been developing lesson units that introduce students to primary-source materials from the Library. Published units run the gamut: from enabling advanced high-school orchestras to contextualize Aaron Copland to inviting second-graders to explore creative movement with the Victor Orchestra on the National Jukebox. The lessons align with national core arts standards and are available online.

This year, my project team has focused on composition: How can the Library’s primary sources inspire students to think more creatively? Students in pilot tests are analyzing unconventional nursery rhymes from the Rare Book and Special Collections Division; they are investigating the contexts that gave rise to various work songs; and they are writing original soundtracks to Edison films. I’m eager to hear the students’ final compositions and also to witness how primary sources can deepen the ways students think about music.

How would you describe the value of the Library’s collections for teachers?
A group of 3-year-olds recently visited the Young Readers Center, and I was invited to sing “Sally Go Round the Sun” with them. In 1934, 19-year-old Alan Lomax, traveling with his father, had heard eight girls singing the song and insisted they record. This impulse to curate and preserve would stay with Lomax his whole life, later leading astronomer Carl Sagan to invite him to work on the Golden Record project in which phonograph recordings were launched aboard the Voyager spacecraft in 1977.

Of course, I didn’t share this story with the 3-year-olds, but it was my personal fascination: Lomax’s musical imagination, captured by going “round the sun” in 1934, led to him compiling the first album to exit the solar system decades later.

The group and I had a grand time learning the song and trying out the movements described by several sources in the Library’s collections. Afterward, one older chaperone shared that she had sung this song in her own childhood. She had completely forgotten it until she heard the music and saw the children play. The music led her to rediscover a part of herself that she could now share with her young students.

To me, this shows the value of the Library’s collections: They connect us to other places, other times and, most importantly, other people. Teachers can use the Library’s treasures to bring the voices of the past into the minds of the future.

Subscribe to the Library blog for your daily dose of smart entertainment here.